Just after midnight, I saw The Economist tweet this.

Responding to the thread another journalist, Katelyn Burns, noted that “Every single one of these questions in this thread has been the subject of major media coverage, op eds in large publications, or proposed in legislation over the last 6 months.”

On my way back from the school run, I listened to Radio Scotland where the discussion was about gender neutral toilets, a largely cost-based decision by local councils building new schools. Much of the discussion was about trans people; online, some listeners condemned the PC agenda, trans people etc. One approvingly shared links to news articles about parents getting “LGBT rights classes” dropped: “We desperately need a revolution” against LGBT people, he said.

Back home, on Twitter I saw Andrea Leadsom apparently supporting parental “choice” about whether or not children get to know that LGBT people exist, and I saw footage of Donald Trump nodding approvingly while Brazil’s bigoted president said he and Trump stand “side by side” in the war on “gender ideology”. Gender ideology is a meaningless phrase beloved by the hard right to describe all kinds of things they disapprove of: trans people, mainly, but also equal marriage, immigrants and women’s reproductive rights.

Also on Twitter, I saw that one Scottish school has canned its inclusive education because of it featured this poem: 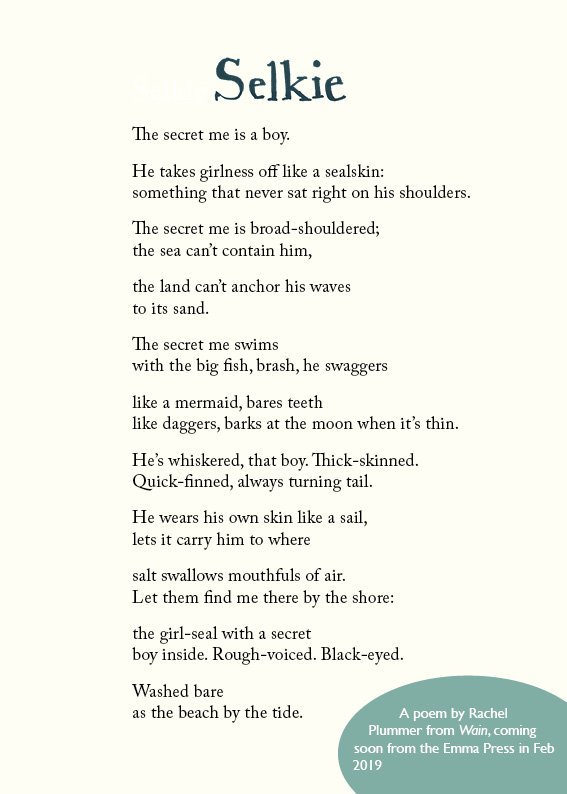 Despite my best efforts my news app continues to show me right-wing newspapers, one of which is defending a woman who accused the CEO of trans charity Mermaids of “mutilating” her child and promoting “child abuse”. Almost all of the press and TV coverage has portrayed this not as vicious libel, but as a nice Catholic lady being victimised for using the wrong pronouns.

This is exceptionally common online: anti-trans activists will conduct a prolonged campaign of bullying against trans people or allies, and when it gets bad enough for the police to get involved they run to the papers claiming they’re being picked on for using the wrong pronouns. The police don’t give a shit what pronouns you use, but they do investigate harassment and malicious communications. The misreporting simply fuels anti-trans hatred.

My news app also gives me the terrible news that not only is Ricky Gervais still alive, but that his latest material includes more stuff punching down on trans people.

All of this before 11am on an entirely typical day. Â I am so, so tired of this.