A great book, but the people who need it won’t read it

I mentioned this briefly before, but I’d like to mention it again: Suckers, by Rose Shapiro, is a wonderful demolition job of the alternative medicine racket. 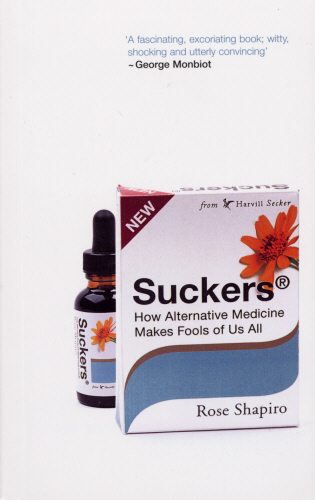 Like all polemics, it sometimes crushes things that perhaps don’t deserve to be crushed – so it’s very hard on acupuncture, despite some indications that it can be useful in some circumstances – but the overwhelming majority of Shapiro’s targets deserve, and get, both barrels.

One American alternative practitioner and supplement salesman, Gary Null, tells us that â€œa solution to cancer would mean the termination of research programmes, the obsolescence of skills, the end of dreams of personal glory . . . Triumph over cancer would dry up contributions to self-perpetuating charities . . . It would mortally threaten the clinical establishments by rendering obsolete the expensive treatments in which so much money is invested . . . The new therapy must be disbelieved, denied, discouraged and disallowed at all costsâ€.

An imaginary researcher says: â€œEvery year we must show you results. After all, you wonâ€™t support us if you donâ€™t think weâ€™re getting something done. On the other hand, we canâ€™t be too successful â€” and we certainly canâ€™t afford to come up with a cure. After all, if we did that, how could we come back to you next year and get more of your money?â€

When in 2003 the US Food and Drugs Administration stopped Alpha Omega Labs selling Cansema, a worthless cancer cure, one supporter suggested that this was â€œno doubt because their products worked. The FDA has a long history of doing this to developers of successful cancer remediesâ€.

Alternative cancer therapists say their plant-based â€œcuresâ€ are overlooked by pharmaceutical companies because naturally occurring substances â€” rhubarb, for example â€” canâ€™t be patented, precluding profit for â€œBig Pharmaâ€. But David Colquhoun, Professor of Pharmacology at University College London, told me: â€œThe kudos that a pharmaceutical company would get for finding an effective cure would be so enormous that itâ€™s hard to imagine that they would decline to produce it, even if it didnâ€™t make a lot of money. In any case, even when a plant-based substance (like Taxol, from yew) provides the initial lead, it is common for synthetic derivatives to be made that have better properties than the original.â€

The book’s particularly good at characterising the typical alt-med consumer – well-educated, reasonably well-off women – and detailing the ways in which the alt-med industry targets them so effectively. Some bits had me jumping around in fury, and others were just desperately sad. Well worth reading.