What’s a bigot to do?

Simple. Redefine the definition of kids to include adults.

I’m not kidding. In North Carolina, anti-trans Republican lawmakers have classed adults aged 18 to 21 as minors.

This enables them to do two things. One, claim that minors are being given cross-sex hormones and/or surgery, medical procedures that are indeed available to adults aged 18 to 21. And two, if the legislation is successful it means they can block healthcare for some adults as well as all teenagers.

The proposed legislation – which, thankfully, is unlikely to pass – makes it very clear what the real agenda is behind all of this. In addition to banning healthcare for trans people, it would also compel state employees to notify their parents in writing if their child displays “gender nonconformity” or expresses a desire to be treated in a way that is “incompatible” with the gender they were assigned at birth. These bills, of which there are far too many, are based on deeply regressive stereotypes of masculinity and femininity that want to keep women barefoot and pregnant and LGBT+ people in the closet.

The current “debate” over whether trans people should be excluded from a ban on conversion therapy isn’t just bigoted. It’s also ignorant. The medical establishment has known for at least fifty years that you can’t convert a trans person into a cisgender one.

As the American Journal of Psychiatry put it in 1969: 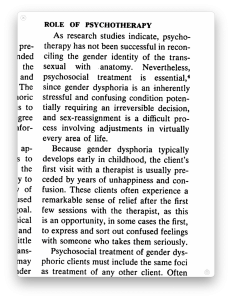 Mallory Moore on Twitter, the image on the right shows a piece from the American Journal of Orthopsychiatry in 1977.

The key line is at the top:

psychotherapy has not been successful in reconciling the gender identity of the transsexual with anatomy.

The history of trans healthcare and conversion therapy has long been based on the idea that to be trans is an undesirable outcome, that it’s something trans people should be trying to escape, and that trans people should be forced not to be trans. The same attitude is apparent when people today talk about removing affirming healthcare from all trans teenagers in case one cisgender teenager makes a mistake; it’s at the heart of the wider attempt to prevent trans people from existing in society.

That belief didn’t just restrict the healthcare trans people could receive. It encouraged some really horrific abuse of trans people in the name of “curing” them. Many trans people were subjected to electro-shock aversion therapy in an attempt to stop them being feminine. Moore highlights one of many examples, from 1973, in which a teenage trans girl was effectively tortured with electro-shock therapy to try and stop her from being trans. 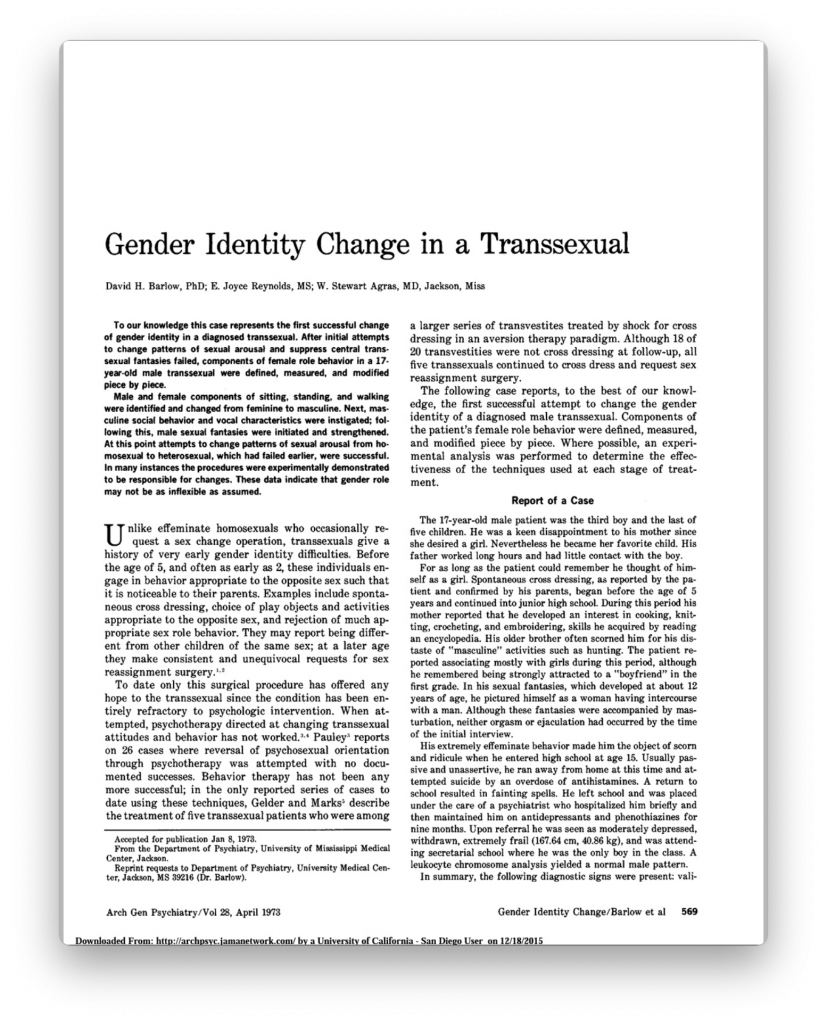 The report notes that:

“to date, only [gender confirmation surgery] has offered any hope to the transsexual since this condition has been entirely refractory to psychologic intervention. When attempted, psychotherapy directed at changing transsexual attitudes and behaviour has not worked.”

Moore also posted the results of a 1970 study in the UK in which transsexuals and transvestites were, as Moore puts it, “strapped to fucking electrodes to fry their transness out”. It didn’t work.

A good piece in the WSJ about right-wing professors who claim that deliberately misgendering students is exposing them to challenging ideas.

Intentionally demeaning our students will not help untangle knotty concepts. For a professor to gender students as they see fit is about power, not ideas. True academic freedom does not mandate, much less permit, the disrespect of students.

…A professor who deliberately misgenders a student humiliates them, and we cannot pretend otherwise. Such disdain for a classmate’s self-esteem intimidates everyone, including cisgender students. This is hazing, not teaching.

One of the reasons I write so much here is because I wish someone had written for me when I didn’t know who I was. Today I learned the phrase “possibility model”: it’s somebody whose visibility tells you that there are other people like you, that being like you is perfectly normal.

This, by Dr Ruth Pearce, puts it very well:

…I will never forget the overwhelming awkwardness of trying to speak yourself into existence when you simply don’t have the language available to you, when you don’t see anyone like you in the world to show that your future is possible. In spite of everything, the world has changed for the better for trans people over the last two decades. It’s no wonder that more of us are coming out than ever, at earlier ages too.

Let’s carry on changing the world together. 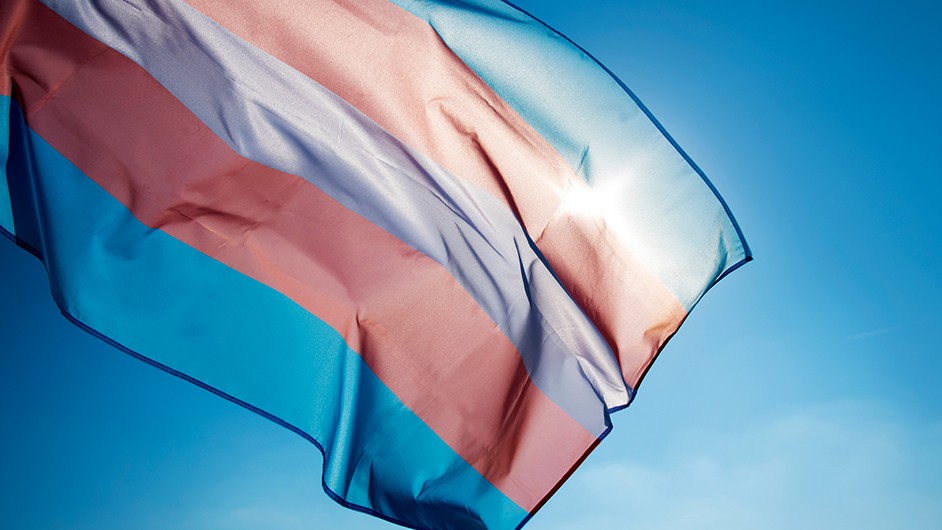 It’s Trans Day of Visibility tomorrow, a day to celebrate trans people and raise awareness of the discrimination we face.

This year’s TDOV takes place in a terrifying climate. In the US, states have banned trans healthcare for teens and made it legal for healthcare workers to refuse to treat LGBT+ people; there are moves to prevent LGBT+ people from adopting children. In the UK the Christian Right-funded war on trans women continues apace, 65% of trans people hide their identity at work, 1 in 3 employers say they wouldn’t hire a trans person (even though such discrimination is illegal) and the new Scots political party formed by sex pest Alex Salmond seems to be recruiting every transphobic politician in Scotland. It breaks my heart to see people I thought were better parroting every bit of Sunday Times anti-trans scaremongering and reciting the Christian Right’s anti-trans talking points – “women’s sex-based rights”, “protecting women and girls”, “predatory males” etc – verbatim.

There simply aren’t enough trans people to battle all of this. We need allies, and we need our allies to speak up. When your co-worker makes a joke about identifying as an attack helicopter or a relative tells the room that lesbians are being fast-tracked for gender reassignment surgery by an international Jewish conspiracy, call them on it just like you would if they were making rape jokes or being racist.

I don’t think cisgender people fully understand just how awful things are for trans people right now. Most of the UK media is against us, and the BBC frequently platforms anti-trans hate groups; in England at least there is an editorial policy that says trans people cannot be on air unless there is an anti-trans organisation on air too. Imagine a policy that said Black people could only be interviewed if Britain First got the last word. And there is a concerted, multi-faceted attack on all our legal rights by people who want trans people eradicated.

Hey if you’re cis and looking for a good chance to speak up publicly on trans rights, the trans people in your families, offices, and communities would really fucking love to hear it because we’re hearing from the people who want us dead all the fucking time right now.

You can say “I support trans people” or “support trans kids” or “trans rights are human rights.” Doesn’t matter, just say SOMETHING.

Because right now we are facing a powerful, sustained attack, one that is going to end trans people’s lives, and we are feeling very much alone.

…do you speak up when a colleague starts talking about how “trans women are men who just want to perv on girls” or a family member laments “lesbians are being told they have to be trans men” or any Sunday Times trans panic headline?

You can’t leave fighting for trans rights to trans people. We have to do it ourselves all the time and it’s personal and it’s incredibly draining and a whole bunch of people won’t even give us the time of day, but they might if it’s you, their daughter/coworker/best mate, etc.

Nobody is listening to trans people. But they might listen to you.

The rash of defections to Alex Salmond’s new ALBA party, which one wag on Reddit claimed stands for “all ladies beware Alex”, reads like a who’s who of transphobic SNP members.

Their defections give the lie to the claim that transphobes were ever concerned about protecting women and girls. They’re right-wing reactionaries, happy to rally round a man whose own QC said he was an “objectionable bully” and a “sex pest” and whose online supporters are often viciously misogynist.

If a child cannot consent to taking puberty blockers their loving parent can consent in their stead. That is the outcome of the decision of the High Court, earlier this morning, in the case of AB v Tavistock and Portman NHS Trust (full decision below), the first case funded by Good Law Project’s Trans Defence Fund.

The effect of the decision in the Bell case earlier this year, when read together with the practice hitherto of the Tavistock not to accept parental consent, was that even when a specialist doctor wanted to prescribe puberty blockers, a child wanted to receive puberty blockers, and their parents believed puberty blockers were in the best interests of the child, an application would still need to be made to the High Court.

Good Law Project’s lawyers were unable to identify any precedent in English law for this situation. What role is there for a judge – what expertise would they bring or function would they fulfil – in circumstances where the child, parents and doctor all agreed on the right course of therapeutic treatment? 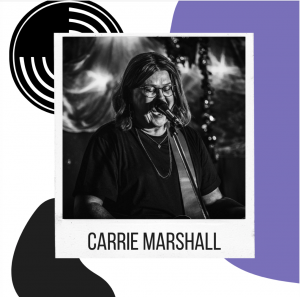 I’m delighted to be featured as today’s Woman of the Day by Braw Gals In Music: Jordan’s Instagram/Facebook/Twitter has highlighted some incredible women and non-binary people, and I’m very proud to be included.

* Braw is Scots for fine, good or excellent.

A new study has found that 65% of trans people have had to hide their identity at work. That’s an increase from 52% five years ago. Despite it being illegal, one in three UK employers say they wouldn’t hire somebody who is trans.

This is why things like the Gender Recognition Act are necessary. By enabling us to change our birth certificate, we can avoid being discriminated against at the very first stage of looking for work; with some employers requesting birth certificates as proof of eligibility to work (even though birth certificates are not ID documents), having the wrong gender marker can mean no interview, let alone a job.

But of course, discrimination doesn’t end with the application form. Many trans people experience aggression and discrimination from clients, customers or colleagues.

For most of us, things aren’t so overt. But many trans people find that freelance clients don’t commission them any more, or that they’re treated differently in the workplace.

And even when trans people secure employment, their experience continues to be shaped by their trans identity: a quarter of all respondents reported being socially excluded by colleagues, while three-quarters said their workplace does not offer information on trans issues or gender neutralfacilities. And 27% reported being deadnamed – addressed by the name they were assigned at birth despite having changed it to better match their identity.

This, in McSweeney’s, is perfect.

It’s crazy. I started crying yesterday when I looked in the mirror. I mean full-on sobbing. It’s hard to express. I finally look… I look like me. By which I mean that I look like a boy who’s 100% just transitioning to unfairly be good at sports in the wrong gender.