It begins with The Telegraph. Its science editor reported that lockdown could cause as many as 200,000 preventable deaths, and the headline was clear:

The same claim was then posted by other news outlets citing the Telegraph. For example, Metro’s headline was “Coronavirus lockdown could cause ‘200,000 extra deaths’”.

Remember, most people who share news stories on social media don’t read beyond the headline.

This is important, because as Baker demonstrates, people are taking the headline and using it in anti-lockdown posts such as this one. 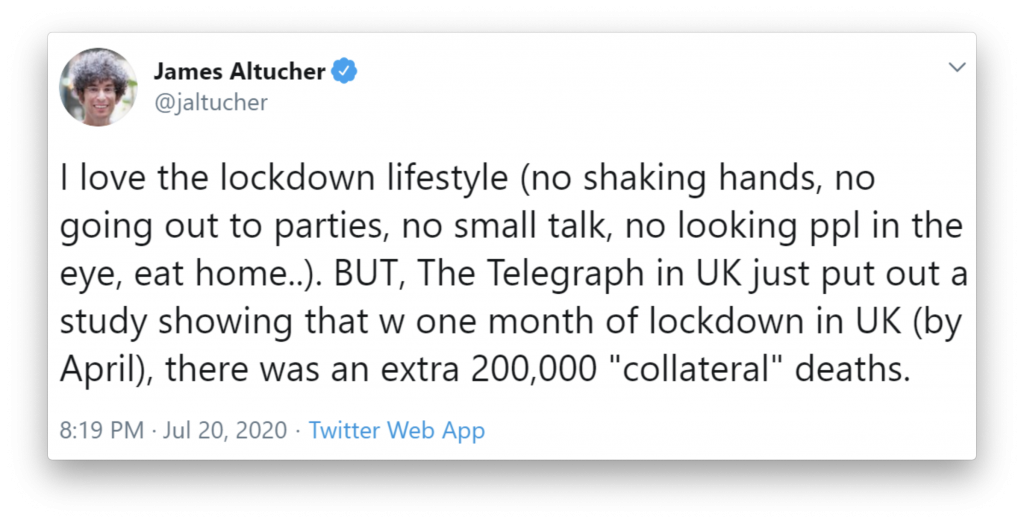 First of all, that’s not what the article says. It is not a report about actual deaths. It’s a report about predictions of possible deaths in a very specific scenario.

And secondly, the Telegraph has framed the story in what appears to be a deliberately misleading way.

As Barker points out, the report this story is based on isn’t just about lockdown. The figures it quotes are from predictions based on “protecting the NHS” – that is, cancelling other healthcare toÂ prioritise COVID-19 cases.

The report asked the question: what would happen if prioritising COVID cases meant cancelling 75% of elective treatments, such as cancer treatments and other life-saving surgeries?

That’s where the 200,000 figure comes from. It’s a worst-case scenario that says up to 25,000 people might die because their treatments were delayed; in the medium to long term, such delays could kill up to 185,000 more.

So in this scenario, if we protect the NHS from being overwhelmed and have to do so for a long time it might â€“ might â€“ cost over 200,000 lives.

We’ll kill a million and a half.

It’s there in the report, and in the Telegraph article, which notes that:

…nearly 500,000 people would have died from coronavirus if the virus had been allowed to run through the population unchecked. And there would have been more than a million non-COVID deaths resulting from missed treatment if the health service had been overwhelmed in dealing with the pandemic.

So protecting the NHS would kill 1.3 million fewer people than doing nothing.

And yet this report is being used to fuel anti-lockdown sentiment when a second coronavirus spike in England, and the need for at least local lockdowns, is highly likely.

In other words: The report implies lockdown could save hundreds of thousands of lives – the opposite of the headline.

Newspapers are very keen to blame social media for spreading conspiracy theories, but many of those theories originate from newspapers and their online offshoots. Some of the most enthusiastic conspiracists are well known media figures: for example, one of the people currently pushing the “lockdown will kill 200,000 people” narrative is Toby Young.

Many of the worst conspiracy theories circulating online originated in print.

Here’s Marianna Spring from the BBC, who got chatting to two young men outside Topshop this week.

Also an anecdote – while I was recording this on Oxford Street, two guys in their twenties started talking to me.

Without me even explaining what the report was about they told me they wouldnâ€™t be getting a coronavirus vaccine because it was a plot to microchip everyone.

The roots of that conspiracy theory are in the anti-MMR vaccine scare, which predated Facebook and Twitter: it spread not on social media, but in the pages of the Daily Mail, The Sun, The Daily Express, the Daily Telegraph and The Spectator. The anti-vaxx movement it spawned is already responsible for thousands of preventable deaths; as it evolves into COVID vaccine denial it could kill thousands more.