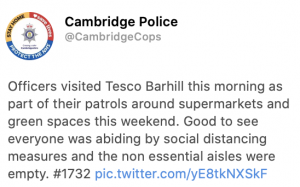 Let’s play a little game. It’s called “show us which specific part of the emergency coronavirus legislation details which supermarket aisles are essential and which ones are non-essential”.

And it’s not just the Cambridge plod. Yesterday we had suggestions that police would check the contents of people’s shopping carts to make sure they weren’t buying anything frivolous. Last week, police were deciding that cigarettes and alcohol weren’t permitted.

So far at least this is a fairly innocuous example of something much more serious: whenever new powers are made available to people, some of those people will deliberately or accidentally overestimate the powers they have.

Whenever new powers are being considered, even in an emergency, one question should always be paramount: what could the worst person in the world do with those powers? Because once the powers have been made available, you’ll find out.