How to break the news (and a country) 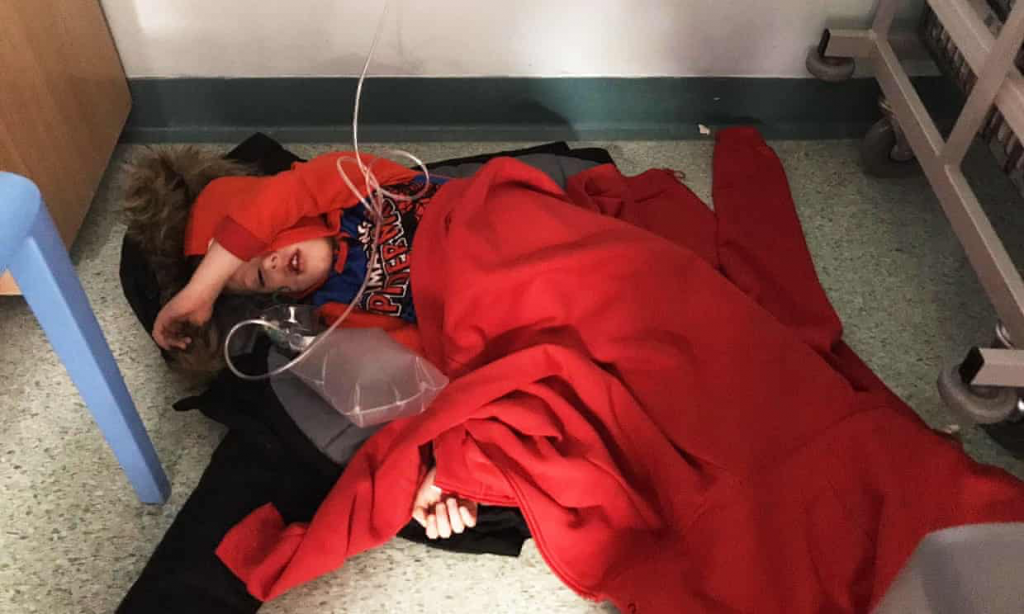 If you haven’t already seen it, this photograph is a PR nightmare for the Conservatives. It shows a 4-year-old boy with suspected pneumonia forced to sleep on a Leeds hospital floor because of a bed shortage. It’s an image that’ll resonate with any parent, but it’s particularly heart-breaking for anyone who’s taken their child to A&E in a similar situation: it was just a few months ago that my own son was being investigated for and later treated for pneumonia, so I’m particularly aware of how awful and frightening the wait can be.

It’s the kind of image that can change the path of elections, so the Conservatives have reacted very strongly. What’s interesting about that is the way they’re doing it. They appear to have activated a very powerful misinformation machine to spread outright lies.

Let’s make something clear first. There’s no doubt that the image is genuine. The Chief Medical Officer at the hospital has already apologised. The Chief Executive has made a personal apology to the child’s mother.

That’s not what people are seeing on social media. On Twitter and on Facebook they’re seeing the same message from multiple unconnected accounts, many of which have lain dormant for some time:

A good friend of mine is a senior nursing sister at Leeds Hospital â€“ the boy shown on the floor by the media was in fact put there by his mother who then took photos on her mobile phone and uploaded it to media outlets before he climbed back on his trolley. 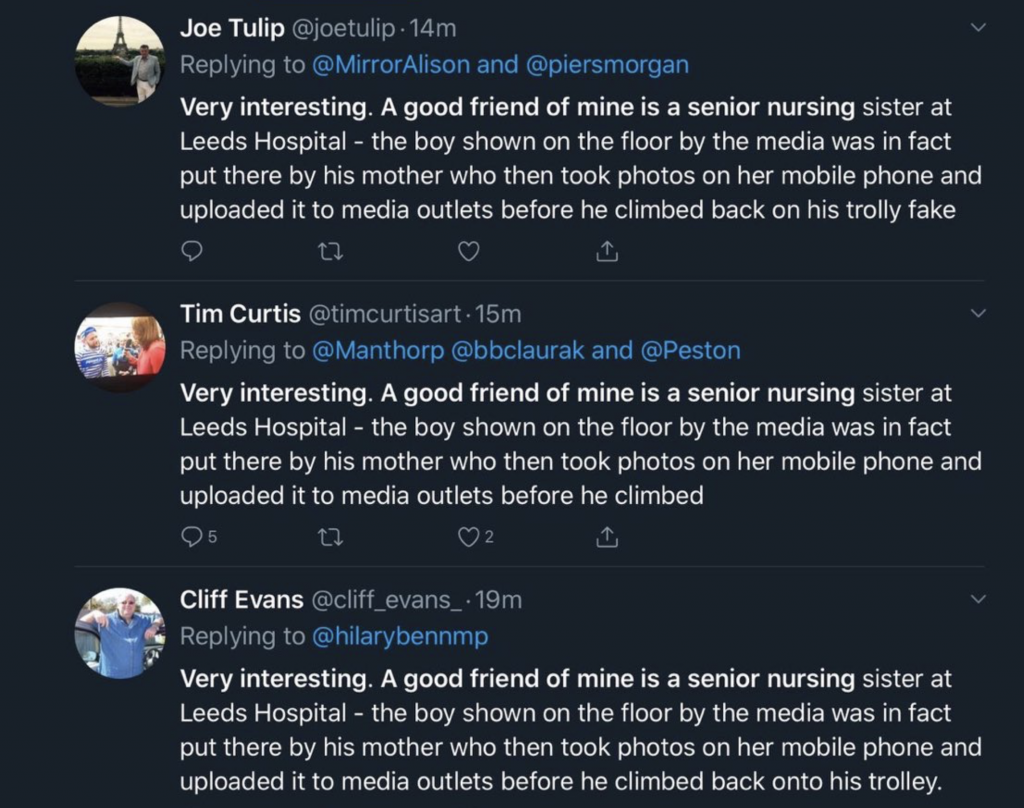 The same cut-and-pasted text has since been retweeted manually by minor public figures such as former England cricketer Kevin Pietersen. But the initial rush of publication has come from what appears to be a centrally co-ordinated network of social media accounts. 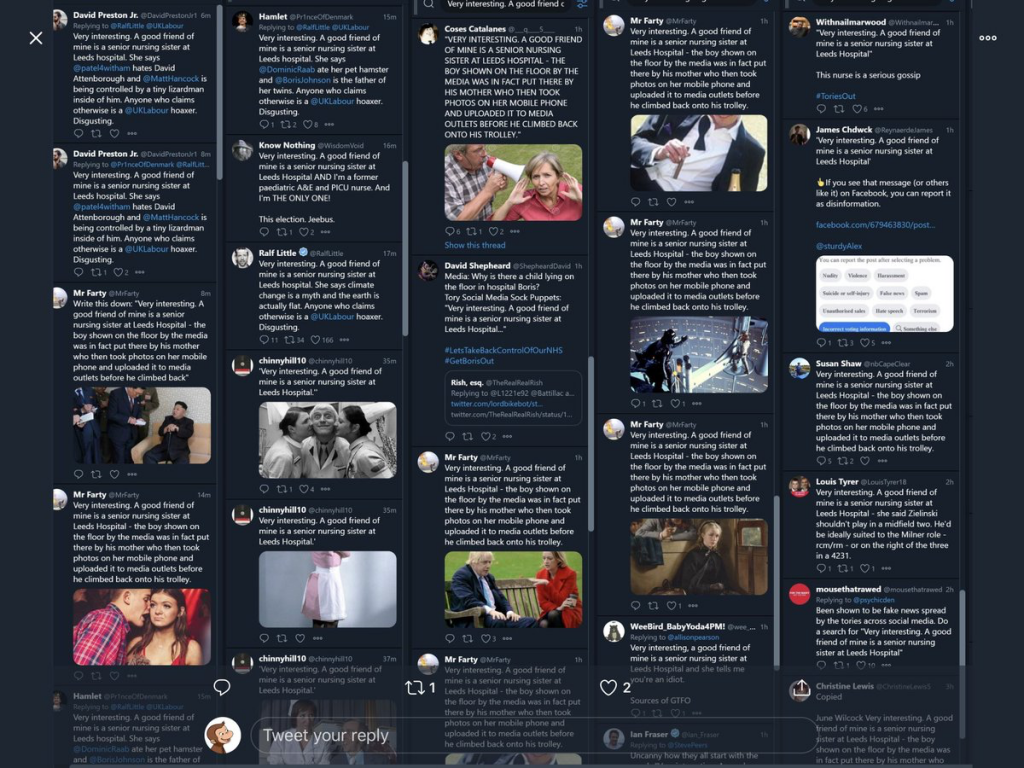 The same message is being posted to carefully selected Facebook groups, as Marc Owen Jones explains (with screenshots as proof). Facebook groups are a very effective way of targeting voters of particular demographics, not least because nobody outside the group usually sees what you’re posting there. 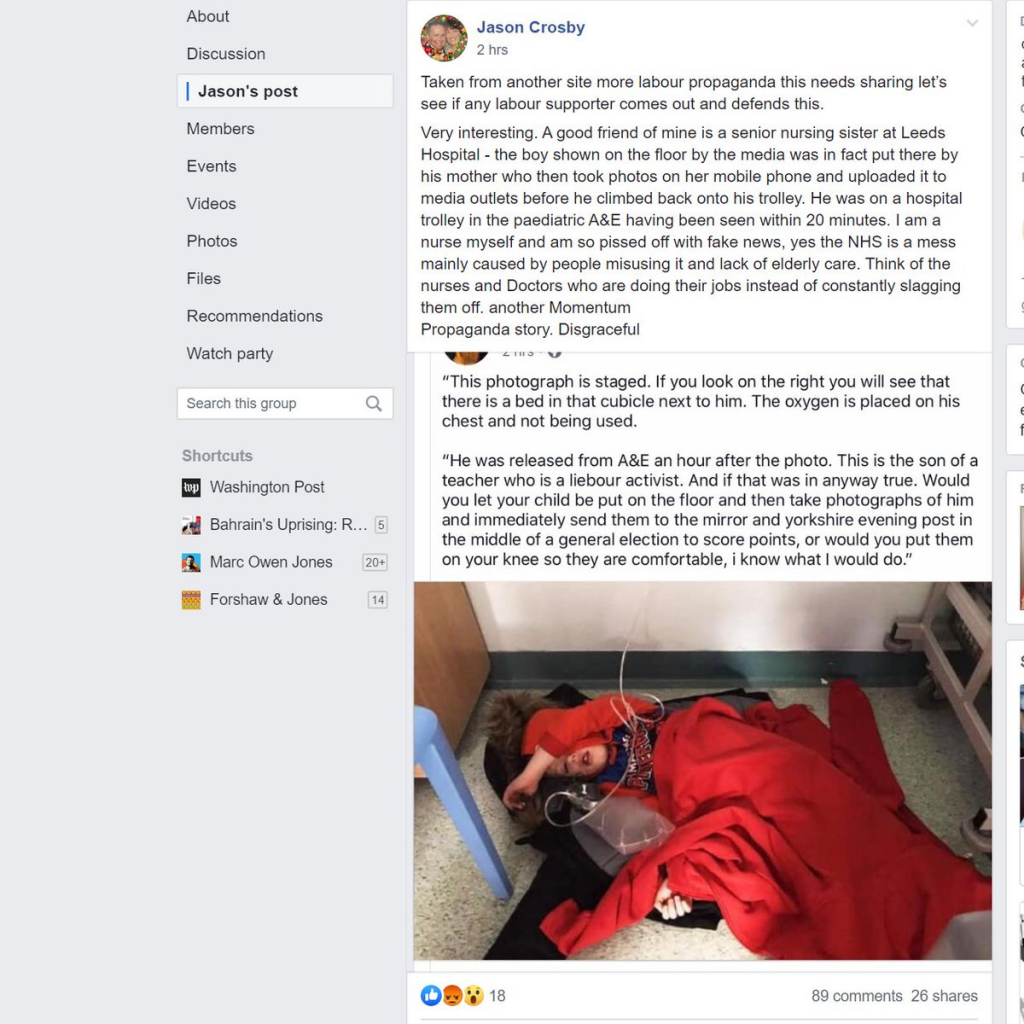 In one example, Jason Crosby pastes the tweet on the FB group for “Seaham Have Your Say”. Seaham have your say is a page with 24k followers serving the North Eastern coastal town of Seaham. His post gets 91 comments and 26 shares.

And it’s making its way to the right-wing press. Here’s Allison Pearson of the Telegraph. 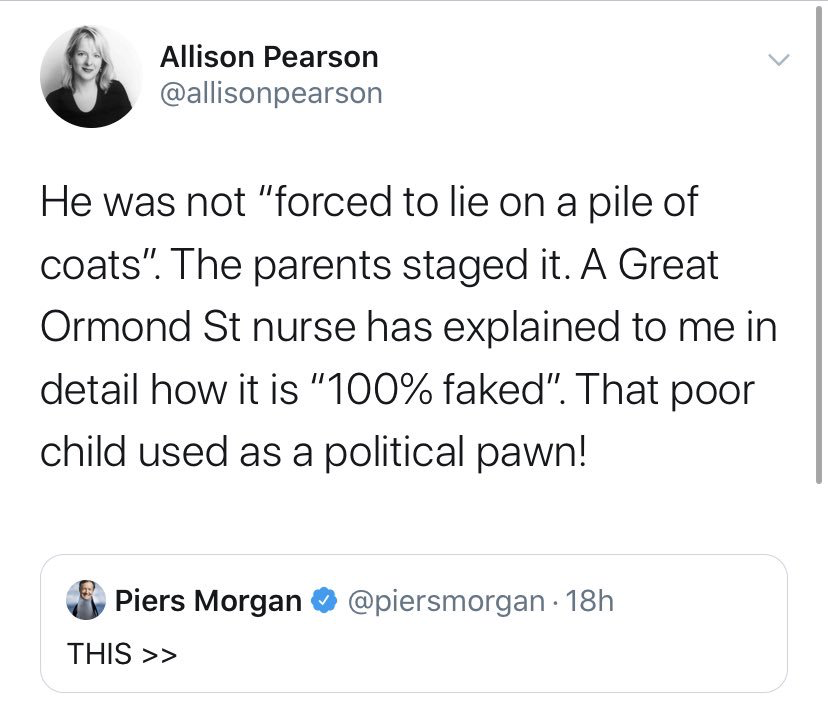 Pearson also claims that the mother of the child is upset that “Corbyn politicised it”, which is at odds with the claim that the mother staged the photos for political reasons. [Update, later that day: Pearson has now deleted the tweets without explanation or apology, presumably after a word with a libel lawyer.]

To reiterate: the hospital has already apologised. From the BBC:

Dr Yvette Oade, chief medical officer at Leeds Teaching Hospitals NHS Trust, said: “Our hospitals are extremely busy at the moment and we are very sorry that Jack’s family had a long wait in our Emergency Department.”

She added: “We are extremely sorry that there were only chairs available in the treatment room, and no bed. This falls below our usual high standards, and for this we would like to sincerely apologise to Jack and his family.”

What we’re seeing here is deeply disturbing. In response to a story it doesn’t like, the Conservative Party â€“ or more likely, a separate organisation with plausible deniability of its connections to the Conservative Party â€“ is trying to bury it not with spin, but with outright lies and defamation. Those lies are coming from a range of sock puppet accounts on multiple social networks and their message is then amplified by tame journalists.

This is no different from the fake-news chants of Donald Trump: the goal is to delegitimise the media, to push the narrative that everything you read critical of The Party is a lie. And it’s a key tactic of fascist politics, which is why it’s so frightening.

Fascism does not begin with jackboots. It begins with creating a “them” and an “us” and then delegitimising the institutions that limit state power such as the judiciary and the press. They ridicule the judges, claiming they represent special interests and are “enemies of the people”, as The Daily Mail put it. They accuse the press of bias and of lying, accusing them of speaking on behalf of the “them” against the “us”. If the press is not compliant, it is threatened into silence (this week alone the Conservatives have threatened the licence of Channel 4 and the funding of the BBC) or dismissed as fraudulent.

Our current Prime Minister is connected to former Trump advisor Steve Bannon, a proud supporter of far-right extremists who wants to “destroy the state”: “I want to bring everything crashing down and destroy all of today’s establishment,” he says. Delegitimising the press is a key part of that strategy.

The US Holocaust Museum famously lists 14 early warning signs of fascism. They are:

How many can you tick?

We don’t have all 14 yet, but many of the items in the list should give us pause. More than any other party, The Conservatives seem to be taking us down a road that we’ve seen many other countries travel. We know all too well where that road can lead.