One of the things I’m really interested in is where words come from and how they’re used. For example, I’ll happily bore you senseless about how “shambles” has changed meaning several times. In the 15th century what originally meant a stool or money changer’s table became used to label the table butchers used to display the meat they had for sale. Shambles then became synonymous with slaughterhouse, before arriving at its current meaning â€“ a state of great disorder and confusion â€“ in the early 20th century.

Sometimes that evolution just happens, but sometimes meanings are changed deliberately. Take “politically correct” for example. It began as a left-wing in-joke, sarcastic and satirical, with left-leaning people taking the mickey out of their own tendency to go a little too far sometimes. It didn’t develop its current pejorative meaning â€“ “political correctness” as a supposedly malign force to be resisted by right-thinking people â€“ until 1987, when the book The Closing of the American Mind told its readers that the real bigotry was telling bigots to stop being bigoted. Since then it’s been used almost exclusively by right-wing politicians and pundits to rail against feminism, LGBT+ rights, anti-racism and anything else that stops them being awful to people.

If you’re a UK newspaper reader, you’ll recall a very similar process occurring with “Health and Safety”. The Health and Safety Executive aims to stop factory workers having their arms ripped off by faulty machinery, agricultural workers from suffocating in grain silos and miners from contracting fatal lung diseases. According to the right-wing press in stories that often turn out to be exaggerated or completely fabricated, what they call “elf’n’safety” has, like political correctness, “gone mad”.

It’s no coincidence that the pundits who rail against “elf’n’safety” also rail against “political correctness”. They are, after all, two cheeks of the same arse: how dare the proles demand safe workspaces and protection from discrimination? Whether it’s railing against red tape or LGBT+ rights, the pundits are firmly on the side of, and punching down on behalf of, the people who have all the power.

Something similar has happened more recently with “triggered”. “Trigger warnings” began in discussions of male violence towards women, particularly sexual violence. Because victims often experienced the symptoms of post-traumatic stress, potential triggers would be flagged up in advance of discussions or presentations so that vulnerable women wouldn’t find themselves mentally reliving their ordeals. There’s some debate over whether the tactic actually works, but clearly it comes from good intentions: it doesn’t want to add to the trauma of sexual abuse survivors.

It’s worth bearing that in mind when you see boorish men â€“ right-wing, anti-feminist pundits, politicians and comedians, some of whom have very dubious attitudes towards women â€“ using “triggered” to assert their superiority over whichever minority they want to abuse. 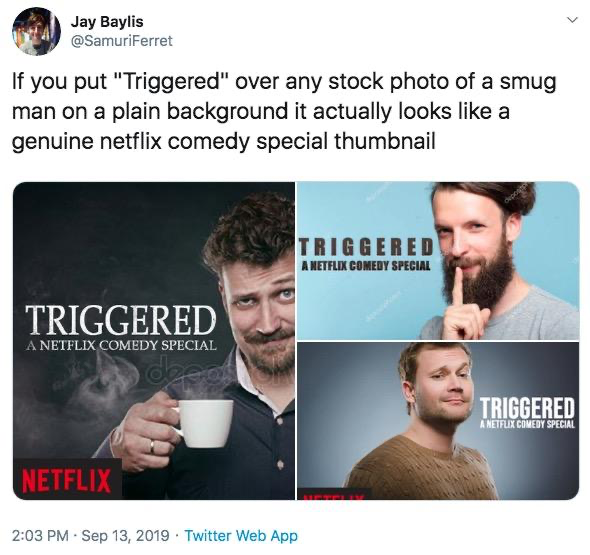 It’s particularly galling when you see the son of the pussy-grabber-in-Chief using a term originally designed to help the victims of people like his dad as the title for his book.Â Donald Trump Jr is currently touring the usual right-wing outlets to promoteÂ Triggered: how the left thrives on hate and wants to silence us.Â

This week he was heckled off stage â€“ silenced, you might say â€“ at one of his readings.

What’s interesting about this particular event is that the people who actually did silence Trump Minor weren’t from the left. They were from the far right.

…the Trump administration has emboldened so many bigots that Maga-hat-wearing supporters are now coming after Jr for not being extreme enough. There has been a 30% increase in the number of US hate groups over the past four years, according to the Southern Poverty Law Center â€“ a trend the civil rights organisation blames on Trumpâ€™s radicalising influence. Dangerous fringe groups have crept out of the shadows and are shouting at the top of their lungs.

The column articulates something I’ve been thinking for a while: there’s a common thread that unites the people who call their books or TV shows “triggered”, who delight in “triggering” audiences on social media, in print or in their shows, and those opposed to workers’ rights, LGBT+ rights, women’s rights and vegan sausage rolls. They genuinely believe that they are an oppressed minority.

A delusional victimhood complex is at the very heart of rightwing ideology. Immigrants are invading and stealing all the jobs. Jews are taking over the world. #MeToo is intent on destroying innocent menâ€™s lives. Gays are destroying family values. The right never see themselves as racists or bigots; they see themselves as victims who are fighting back against the imminent extinction of western civilisation. Forget being stoic or silenced; they are constantly triggered and they never shut up.