You can’t say “it happened to me!” if it didn’t happen to you

Sky News, prop. R Murdoch, has given strange prominence to the launch of a new charity. 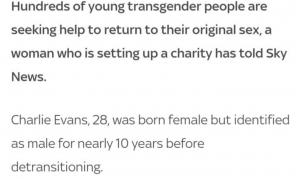 Let’s start with a question. Detransitioning from what?

But that’s not what Evans, the founder of the charity, detransitioned from. She’s written extensively online about her story. She was never diagnosed with gender dysphoria; was never prescribed hormone blockers; never had surgery. During the ten years she was supposedly living as a man she still presented female.

It’s important to tread carefully here, because the current system places undue emphasis on psychiatric assessment: being trans is not a mental health issue and you’re still trans if you don’t have a diagnosis. And many trans people for various reasons have to present as their birth gender from time to time.

However, if you’re telling a national news outlet that you lived full-time as a man for ten years, Â hated anyone seeing your feminine body and tightly bound your chest for a decade, low-cut swimsuit pics from the middle of that period tend to undermine that. And if you are claiming that there is an epidemic of young women being rushed into hormone treatment and surgery, and you are using your own experience as evidence of that, you need to be able to back up your claims.

Quite simply: it’s dishonest to claim experience of a system if you do not have that experience, to say “it happened to me!” if it didn’t happen to you.

“I had short hair and hated periods” doesn’t cut it.

“I had short hair and hated periods” is a very common trope among anti-trans activists, many of whom say things along the lines of : “I was totally butch when I was a teen, I bought my shirts from the boys’ section and wore Doc Martens and didn’t like having cramps and if that was today I’d be rushed into surgery and given phalloplasty.” 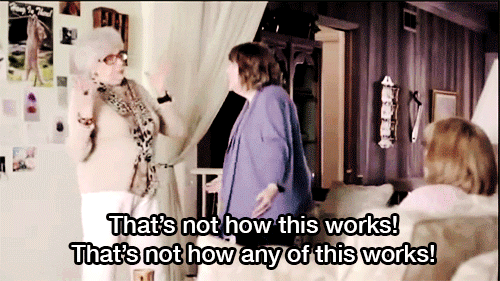 That isn’t just attention-seeking nonsense by people lucky enough not to have experienced dysphoria. It’s completely offensive to trans men. It essentially says they’re faking it, that strangers on the internet know them better than they do. It shows a lack of knowledge of what it’s like to be a trans man, of the discrimination and prejudice they experience and of the system as it works (or more likely, doesn’t work) for them.

I know several trans men and what they’ve gone through makes my own transition seem like a pleasant stroll through a leafy park on a sunny day. I genuinely don’t know how some of them cope against such incredible obstacles. And I know for certain that none of them is being rushed through anything. Quite the contrary. One person I know is in a lot of distress after repeatedly being refused any help whatsoever. Others have been treated appallingly by supposed health professionals. All have languished for many years on too-long waiting lists.

These articles don’t exist in isolation. They are fuel for the anti-trans bigots who are already gleefully sharing the Sky article as yet moreÂ “evidence” of a rush to surgery that doesn’t exist. The crowdfunder will no doubt attract the usual dark money from people who don’t want any trans folk to get any kind of healthcare or support, and who see this as yet another way to get anti-trans misinformation aired.

And it is misinformation. The Sky article doesn’t do basic research, makes baseless claims and uses anecdotes from two people, one of whom hasn’t had any medical treatment, as “evidence” of a supposed epidemic of medical malpractice.

The article here is not about people who experimented with their gender presentation or adopted gender-neutral names. ItÂ repeatedly uses phrases such as “detransition to their biological sex” and talks about surgery. The message, which is right there in the headline, is that hundreds of people are seeking help to “return to their original sex”.

There is currently no data to reflect the number who may be unhappy in their new gender or who may opt to detransition to their biological sex.

Oh yes there is.Â The surgical regret for gender reassignment surgeries is less than 2% worldwide. That’s massively lower than the regret rate the majority of the most common surgeries including cosmetic surgery. Gender reassignment surgery is known to be extremely successful in improving trans people’s mental health. Here are some stats from the American Journal of Psychiatry, published yesterday.

We also know the detransition rate of people attending an NHS Gender Identity Clinic in England, which includes people who only undergo social transition as well as those who have medical help. It’s 0.47% from a sample size of 3,488 people.Â That’s three people, two of whom re-transitioned.

Detransitioners exist, and they need and deserve sympathy and support. There are some really awful stories of people who attempted to transition and found life to be just as unbearable because of the transphobia they faced, so they returned to the gender they were assigned at birth. Many will try again later in life; they won’t always be successful then either.

I can’t imagine what that must be like. To go through transition once is hellish. To go through it and then have to reverse it, before perhaps trying again…

Thankfully, though, those ordeals are incredibly, incredibly rare. And what the poor sods who go through it really don’t need isÂ a bunch of attention-seekers and fantasists claiming to be detransitioners because they had short hair when they were 17.

I feel sorry for anyone who has found it hard to work out who they are. But that sympathy stops when somebody takes their own personal hurt and turns it outwards, as appears to be the case here.

The idea that trans people or some sinister trans lobby is pushing people towards transition is nonsense.Â Trans people, trans healthcare specialists and trans allies are the last people who want people’s gender presentation policed or people undergoing treatment they don’t need. Butch women, femme guys, non-binary identities, genderqueer and genderfuckery: we’re all for it. We know how difficult, traumatic and painful transition can be and the last thing we’d want is anybody to go through any of it unnecessarily.

But that’s not the story Sky wants to tell. Given a chance to scaremonger about the sinister trans lobby once again, the most basic tenets of journalism are ignored. All Sky News needed to do was ask a couple of simple questions about the validity of the claims being made and the whole thing would have fallen apart.

But that’s not how Murdoch outlets work, is it?