In my previous post I wrote about the easily debunked claims used against trans people. I should probably provide some evidence.

The 80% figure is long-debunked nonsense. 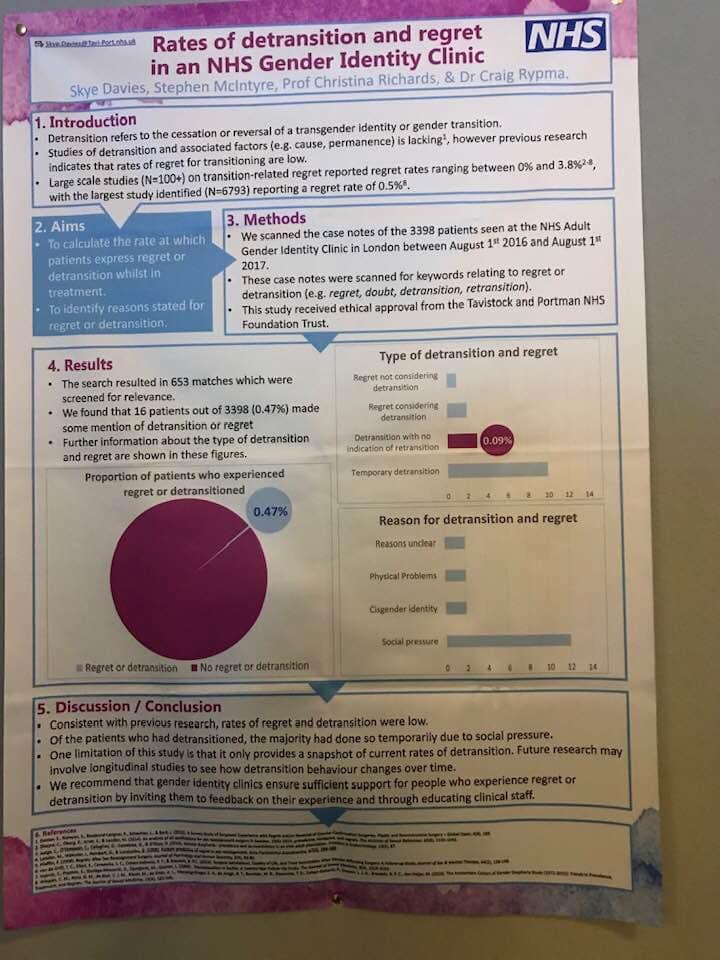 And here’s item number two, an analysis on the “rapid onset gender dysphoria” study that’s been quoted in multiple newspapers to suggest that trans people are only going through this shit because they think it’s cool.

…The article continues to pathologize gender dysphoria and affirmation of trans identification through social network peers and online environments as an example of â€œdeviancy training,â€ and describing it as an unhealthy pattern of reinforcement with trans-identified peers and linking it with a behavior that is â€œdeceiving parents and doctorsâ€

…Providing this premise prior during the consent process provides an opportunity for motivating a specific group of parental-respondents, particularly those who agree with the premise, to elect to participate in the survey. Furthermore, providing the premise of the study in this way sets expectations of the survey before parental-respondents can even begin to provide their answers

…Also of concern is the demographic profile of the parental-respondents in this paper. The parental-respondents displayed very narrow demographic stratification despite being sampled from a very specific venue: 82.8% were female sex at birth, 91.4% were White, 99.2% were non-Hispanic, 66.1% were aged 46â€“60, and 70.9% had attended college. Notably, 76.5% believed that their childâ€™s trans identification is not correct, and recruitment relied heavily on three particular Web sites known to be frequented by parents specifically voicing out and promoting the concept of â€œROGD.â€ Thus, these are not just â€œworried parents,â€ but rather a sample of predominantly White mothers who have strong oppositional beliefs about their childrenâ€™s trans identification and who harbor suspicions about their children having â€œROGD.â€

…it is plausible that these data may contain multiple responses from the same parental-respondent.

In other words, it’s a shitshow of Andrew Wakefield proportions, horrifically biased propaganda pretending to be science.

Then there’s trans women in sport, where some 55,000 Olympians have competed since trans people were allowed to participate more than a decade and a half ago, and in the US NCAA athletics where more than 450,000 athletes have competed, without any sign of men enduring chemical castration for a year so they can compete against women.

You get the idea.

Finding the facts takes seconds. If someone isn’t doing it it’s because they’re incompetent or malevolent.