Go and get the flu vaccine

I was given the flu vaccine the other day. I hadn’t really thought about it but since a lung cancer scare a few years ago there’s a flag on my medical records and I’m considered high risk for pulmonary infections and COPD, so I get invited to this stuff.

As you’d expect, the vaccine didn’t give me flu, make me grow horns or make me autistic, because vaccines don’t do that. What it did do was make me feel a bit crap for a few hours before protecting me from catching â€“ and more importantly, spreading â€“ a really horrible disease.

As Frances Ryan writes in The Guardian, the flu jab saves lives.

Flu is often thought of as nothing more than a week of feeling rotten, but it can be life-threatening, particularly for older people and anyone with an acute illness like cancer or underlying chronic health conditions, like me.

In 2018 I developed flu complications that left me unable to breathe or move and on a ventilator for months. Itâ€™s left me with life-changing fatigue and pain, but in many ways I was lucky. Last year 1,700 people died of the flu â€“ despite the fact that this was a relatively mild strain â€“ and further hospital admissions put even greater pressure on an already overstretched NHS.

The vaccine is free for at-risk groups and incredibly cheap for everybody else. You should get it, if only to prevent having to take time off work to feel like shit.

Unfortunately we have a problem persuading people to take vaccines. Ryan:

The UK, like much of the west, is battling an anti-vaxxing movement in which social media has become a gateway for scare stories and quackery. Diseases such as measles are on the rise in England, with the UK recently losing its measles–free status with the World Health Organization because a growing number of people believe dangerous myths about vaccines.

Things are so serious that one newspaper is taking a stand. Here’s today’s Daily Mail. 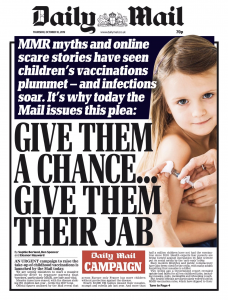 The crusading, campaigning Mail is going to fight against the forces of idiocy and darkness that have persuaded parents that vaccines are dangerous.

Forces such as, er, the Daily Mail. 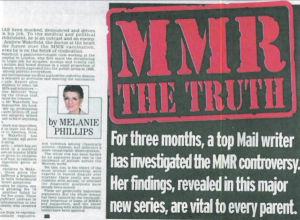 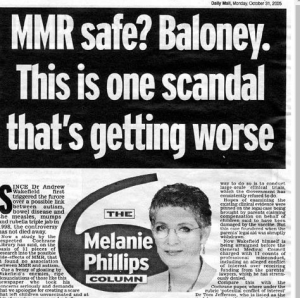 The Mail scaremongered about vaccines for years, and while other UK papers (including the Guardian for a while) did the same it was by far the most vocal. Its sustained, decade-long campaign against the safety of the MMR vaccine continues to inspire and be cited by the global anti-vaxx movement.

As late as 2005, the Mail continued to argue that debunking the MMR/autism scare was fake news and accused critics of disgraced doctor Andrew Wakefield as perpetrating a witch hunt.

The science editor of the Daily Mail argued that â€˜the MMR scandal is getting worse. Urgent questions about the vaccineâ€™s safety remain unanswered. The doctor who raised those questions is being subjected to what appears to be a witch-hunt. The parentsâ€™ recourse through the courts has been blocked. Now they have to put up with being told yet again that the evidence of their own eyes is fraudulent.â€™

The Daily Mail spent a decade scaremongering about vaccines: Google “Daily Mail MMR” and you’ll find tons of uncorrected “the truth about MMR” articles and articles that push the long-debunked claim that vaccination causes autism.

Its new campaign is laudable, but it won’t undo the damage it’s done to public safety not just here, but globally.