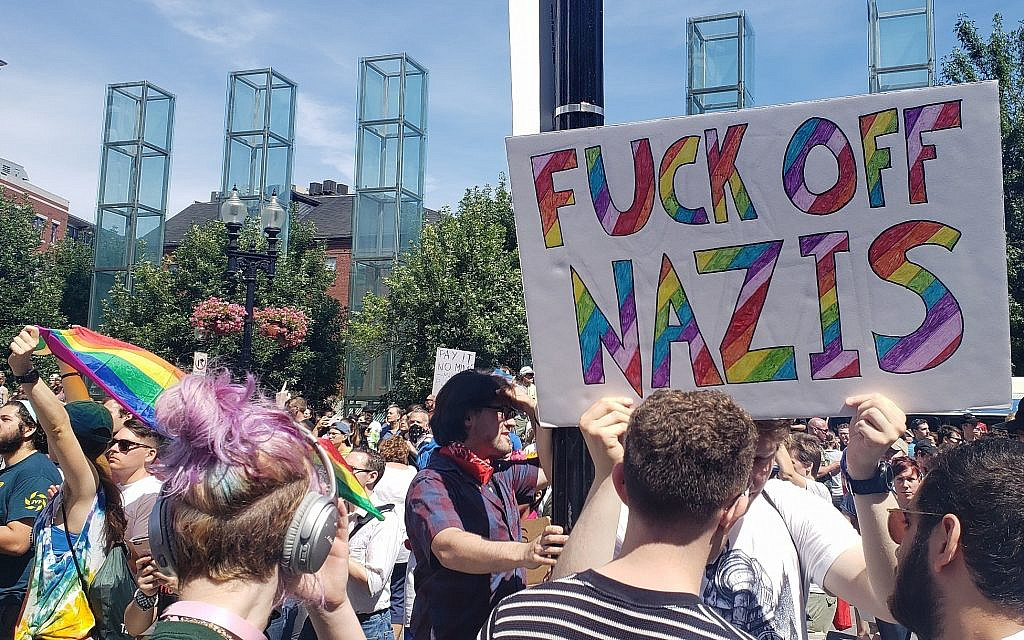 I’ve written before about Straight Pride and how it’s a front for the far right.

The much-hyped Boston event took place this weekend and proved that â€“ surprise! â€“ it’s a front for the far right. To all intents and purposes it was a Make America Great rally, complete with police pepper-spraying counter-protestors.

David here at the Boston Straight Pride Parade has been going on for the last 10 minutes ranting about how the Jews faked the holocaust, rule the world and created the LGBT movement to destroy America pic.twitter.com/awkkds7AAd

Other marchers waved placards saying “Build The Wall”, because apparently racism is an important part of straight culture too.

Bigots cannot count on a silent majority to look the other way anymore, so how do they continue to dig in their roots?

Easy. Construct a parade in direct contrast to Pride, tapping into the homophobic leanings of those not quite convinced to join the alt-right. After all, if LGBTQ people get their day, why shouldnâ€™t straight people? Claim straight people as an â€œoppressed majorityâ€ facing discrimination from the city of Boston. Claim that denying straight people their right to parade in the street is unconstitutional. Gather the wavering masses under a single umbrella and disseminate the us-and-them mentality from there. When fascism canâ€™t take hold through overt means, move it underground. Create a system of cycling dog whistles. Enmesh bullied kids into a toxic echo chamber of propaganda and build a new generation of fascists. Easy.

There will be other Straight Pride events, because what these rallies do is tell racists and bigots three things. One, you are not alone. Two, you are in the right. And three, the police and the state are on your side.

Here’s how that pans out elsewhere.

In Poland, July’s gay pride march was watched by spectators from over 30 anti-LGBT, mostly far right groups who outnumbered the marchers four to one. Those spectators didn’t just watch. They attacked the marchers with rocks. Dozens of LGBT people were physically assaulted before, during and after the event. Journalists were spat on and beaten. The police, while present, didn’t appear to do very much.

As The Telegraph reports:

Both the Catholic Church and the Polish state actively work to create a hostile environment for the gay community.

…The ugly scenes in Bialystok were not an isolated incident. Several Polish regional parliaments have declared their districts to be â€œLGBT-free zonesâ€ in recent months…

…Officially the government decries the violence seen in Bialystok, but at the same time hints that LGTBQ groups are out to provoke. The education minister Dariusz Piontowski has questionedÂ whether such marches should be allowed since they â€œawaken resistanceâ€ in the wider public.

The government stance is also backed by a powerful conservative media that has loaded Polandâ€™s newstands with brazenly anti-LGBTQ magazine covers. OneÂ publication,Â Sieci, warned of a â€œMassive attack on Poland comingâ€, while another, Do Rzeczy, showed a mocked up prime ministerial podium flanked with rainbow flags.

A third, the Gazeta Polska, went even further, printing a cover warning that the LGBTQ movement wanted to â€œdestroy their civilisationâ€ and giving readers a “LGBT-free zone” sticker showing a black cross over a rainbow flag.

Let’s not play their game and pretend Straight Pride marches are about sexuality, or about gender identity. They’re about white supremacy.

Corinne Engber believes that the strategy is ultimately doomed.

Ultimately, this recruitment attempt will fail before it begins as the environment of the country leans toward support for Jewish people, people of color and LGBTQ people.