There’s been a lot of publicity over a new study into the so-called “gay gene”; the study reports that although there doesn’t appear to be a single genetic marker for gay people, there may be several. Similar studies have attempted to find a genetic marker for trans people. 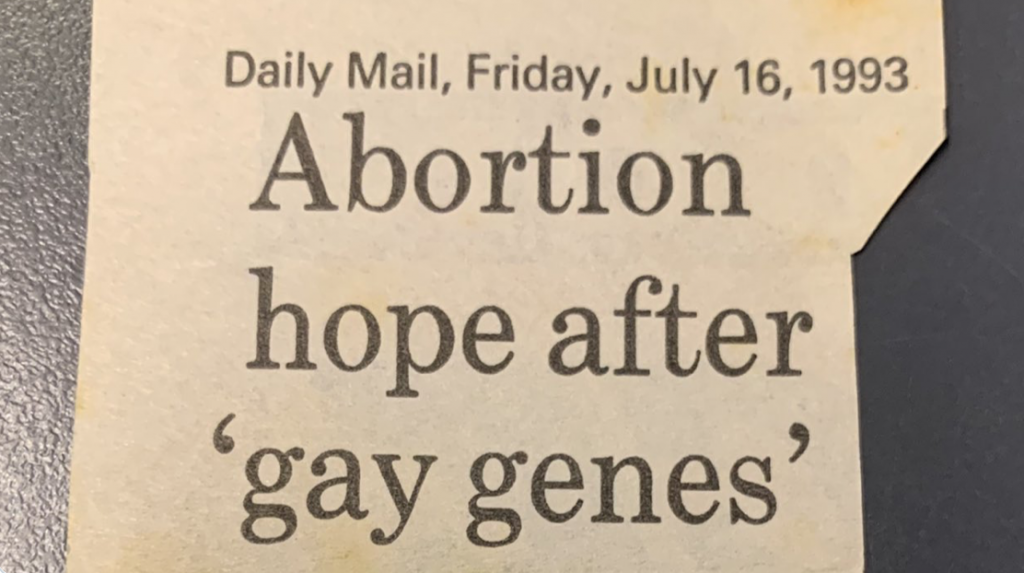 This image was posted by Antony Tiernan, and in response the writer Huw Lemmey noted the context: “over a million British people still buy this paper every day.”

Let’s be optimistic and believe that nobody would choose to abort a baby whose genes suggested they might be gay or trans. That doesn’t mean genetic screening for LGBT+ people couldn’t happen, or couldn’t be misused.

The problem with any kind of genetic screening is that it’s a guide. For example, I’ve just had my genes analysed and I have a slightly raised risk of pulmonary disease. That doesn’t mean I will get it. It just means there’s a higher likelihood than perhaps you have.

One of the things I was screened for is abnormalities relating to the BRCA1 and BRCA2 genes, which we know are implicated in many cancers. I’m clear â€“ but the screening only checked a small proportion of the thousands of potential variants. I could still have a difference in one of those genes that means I’m more likely to get cancer.

Now imagine I’d been screened for genes linked to being trans. The same thing could apply: you could check for 100 different anomalies, and that could come back negative â€“ but there could be hundreds upon hundreds of other genetic variations that you don’t check for, and which have contributed to me being the fabulous trans woman you see today.

Why does that matter?

It matters because if we developed a genetic test for LGBT+ people we might decide to use it in asylum claims, because one reason people claim asylum is because they face persecution for being LGBT+ in intolerant countries. Imagine: we could easily differentiate between the real asylum seekers and the fakers!

Far-fetched? Last week a British judge rejected an asylum seeker’s application because he didn’t seem gay enough. He contrasted the man’s demeanour with that of another man who “wore lipstick” and had an “effeminate” manner.

In that case, the judgement was appealed and has been sent back for review. But what if the judge had rejected the applicant because his genes “proved” he wasn’t gay?

It could also be used to “prove” that people are lying about their sexuality or gender identity in other circumstances. There’s already fierce and often malicious debate over whether some trans people are “trans enough”, so for example anti-trans bigots are keen to differentiate between “true” trans people, who they pretend to care about, and “fake” trans people â€“ people like me who haven’t had surgery â€“ whose human rights they want to curtail and whose healthcare and support services they want to defund.

Scaremongering? Here’s TIME magazine with a short history of how bullshit science has been variously used to justify discrimination against people of colour and against women.

In the early 20th Century, out of context IQ testing was used to justify the forced sterilisation of black and hispanic people.

the notion of feeble-mindedness, at least partly determined by IQ tests, was used as a justification for the Supreme Courtâ€™s notorious Buck v. Bell decision, which allowed forced sterilization for â€œinsanity or imbecility,â€ mostly among the population of prisons or psychiatric hospitals.

One of the links in that article goes to a study of pseudoscience on women’s suffrage.

many scientists supported the antisuffrage argument of â€œphysical force,â€ claiming that women lacked inherent energy needed to physically enforce laws and should be excluded from voting. A secondary argument claimed that such cyclic elements as menstruation and menopause made women too irrational to vote.

More recently, halfwits in Silicon Valley have been pushing the bullshit theory that men are better suited to tech jobs because of exposure to “prenatal testosterone”.

Sexuality and gender identity are complicated and multifactorial, and they are normal variations in human behaviour and biology. That means there can never be a reliable genetic test for being gay or being trans, and we should be scared of anyone who wants to create one.

…as long as there is scienceâ€”which means foreverâ€”there will be people willing to misuse what it teaches.