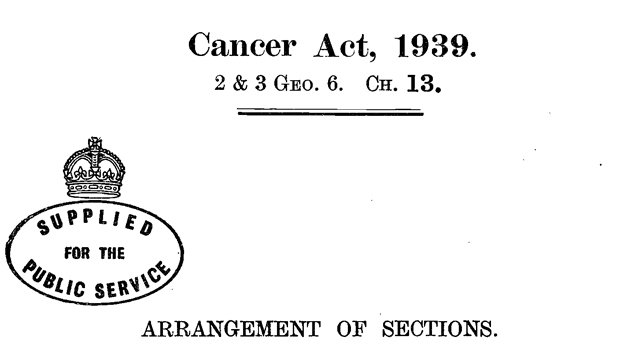 The Cancer Act 1939 is one of the few pieces of legislation that outlaws pseudo-scientific medical bollocks. As Cancer Research explains:

At its heart, the current incarnation of the Cancer Act is designed to protect cancer patients and the public from being bombarded with adverts for cancer treatments, from any source, including medical professionals, pharmaceutical companies, alternative practitioners, or anyone else.

One of the reason the act exists is because charlatans prey on people with cancer. If you’re convinced that you’re going to die, or that the treatment that may save you could be almost as bad as the disease, you’re a soft mark for sharks peddling expensive miracle cures.

Maybe the Mirror’s lawyers should have a word with its editorial team. This article is appalling.

After a friend told her about an alternative cancer treatment centre called â€˜Hope4Cancerâ€™ in Cancun, Mexico, Kate re-mortgaged her home and dug into her life savings in order to afford the Â£35,000 three-week program.

And following her first treatment in late October, Kate was amazed after scans revealed that the tumour on her lung had shrunk by 75 per cent â€“ going from the size of an apple to the size of a grape â€“ while there is now zero traces of cancer in her lymph nodes and limited cancer in her liver.

There’s just one little problem with all of that. From the same article:

I was put on a target therapy drug called Alectinib

Over to you Clive Peedell, NHS consultant clinical oncologist with a particular interest in lung cancer:

Sorry, but as a lung cancer specialist, I can confirm that this story is nonsense. The lady was on alectinib, which is a highly effective targeted therapy used in ALK+ve lung cancer ie her dramatic response had nothing to do with the alternative therapies.

So what we have here is an advert for a bullshit facility in Mexico that takes enormous sums of money from people at their most vulnerable. Sadly the Mirror could argue that this is editorial, not advertising, and therefore exempt from prosecution under the Cancer Act. But while it may comply with the letter of the law, it certainly doesn’t comply with its spirit.

Then again, it might not comply with the letter of the law after all. Cancer Research again:

The Cancer Act still covers social media and any websites that are accessible within the UK, if theyâ€™re aimed at the general public rather than the specific groups of people mentioned above, and Trading Standards can still choose to prosecute people advertising through them.