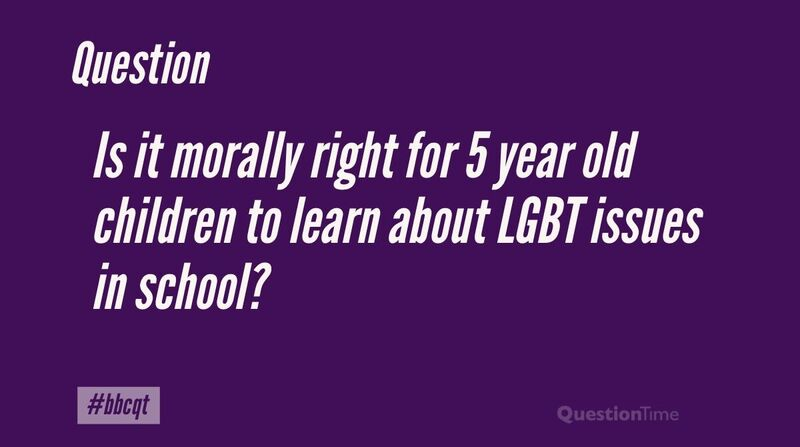 This is from BBC Question Time this week: the question was pre-vetted, selected for broadcast and posted on social media to get publicity for the show.

Is it morally right for the nation’s broadcaster to imply that “LGBT issues” may be immoral?

If you don’t have your thesaurus handy, here are some synonyms for immoral: Wicked. Evil. Depraved. Vile. Villainous. Degenerate. Perverted.

Whether by accident or design, this is letting a handful of religious extremists set the terms of discussion (and it really is a handful: while this is being reported in the papers as muslims being intolerant, over in Germany every single muslim MP voted for equal marriage this week; in the UK in the same week, a whole bunch of Christian MPs voted against teaching inclusive sex and relationship education).

It’s suggesting that there’s something inherently shameful about discussion of LGBT people, that children have to be protected from the very notion. The use of the word “exposed” in much of the so-called debate is telling, because there’s no positive connotation to the word. You’re exposed to unpleasantness, to sickness, to perversion. Nobody talks about people being exposed to family values.

A reminder: you can’t catch being gay, or trans. If social attitudes could influence sexuality or gender identity there would be no gay or trans people. The only difference social attitudes make is to whether people feel it’s safe to be themselves.

Another reminder: every school will have LGBT pupils and parents, and probably teachers too.

This isn’t about an informed debate. It’s about a small bunch of intolerant yahoos trying to drag other people’s children back to the Stone Age. Some people out there think the world is flat, but we don’t have debates on whether we should stop exposing children to the fact that the Earth is a sphere.

To adopt the position of bigots once would seem careless. To do it again and again… here’s Woman’s Hour. 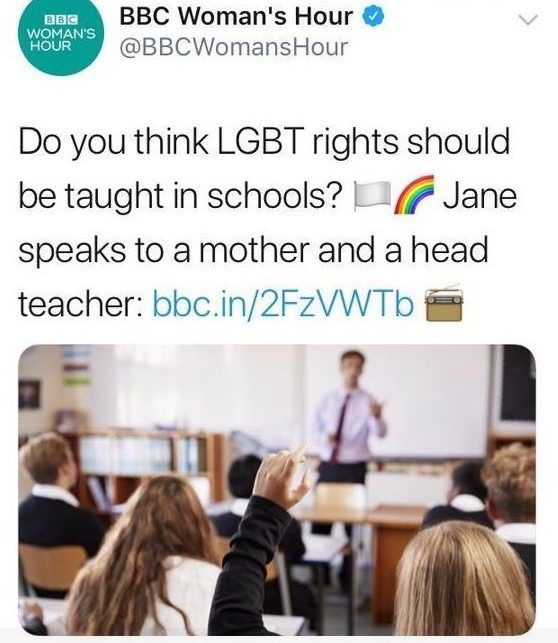 This tweet demonstrates another too-common occurrence: the so-called debate is about LGBT people and without LGBT people. That’s like running a piece on racism and only featuring the voices of white people (which happens a lot too). Woman’s Hour has been doing this for a couple of years now with trans people. 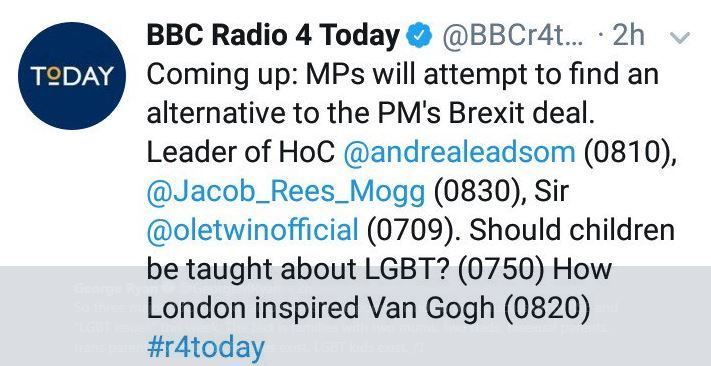 We put the hateful Section 28 legislation to bed just under two decades ago, but thanks to right-wing fundamentalists and social media rabble-rousers there’s a concerted attempt to re-open a “debate” that was settled a long time ago: LGBT rights are human rights.

I’m not the only person who thinks this. The BBC’s own journalists are appalled.

BBC Breakfast presenter Ben Thompson said he had concerns with the phrasing of the question: â€œLGBT â€˜issuesâ€™? Like what? That we exist? One of them, RIGHT HERE, is on your TV every morning â€¦ Would you ask if itâ€™s â€˜morally rightâ€™ to learn about gender/race/religion/disability â€˜issuesâ€™?â€

BBC News senior foreign producer Tony Brown added: â€œReplace LGBT with black or Jewish and this question would never have been asked on national TV.â€

One on-screen BBC journalist said there was growing concern among the corporationâ€™s LGBT employees about how the BBC debates such issues: â€œWe are supposed to set things in context â€“ but that doesnâ€™t mean accepting a position that is wrong, or failing to call it out as offensive. We wouldnâ€™t ask â€˜Is terrorism morally justified?â€™

â€œI look at the care we take over our other reporting and this leaves me totally confused. We are meant to educate as well as inform.â€

There is something deeply wrong in that part of the BBC: it’s the same thinking that invites neo-Nazi group Generation Identity on to discuss the Christchurch massacre, the same thinking that enables former EDL leader Stephen Yaxley-Lennon, aka Tommy Robinson, to portray himself as a free speech martyr instead of a vicious, hateful racist. Not all views are equal. We don’t invite the KKK on to talk about racism. Or at least, we don’t just yet.

It strikes me that a big part of the problem is that the people making the decisions don’t have to live with the consequences. If, say, Jenni Murray pontificates on whether trans people are human, she isn’t going to suffer from the increase in hate crime that we’ve seen since mainstream media started echoing anti-trans bigots’ talking points. If Newsnight features former EDL people fanning hatred, their producers don’t need to worry about getting their heads kicked in on the way home. This applies to other media, of course, but the BBC is the organisation that sets much of the news agenda and frames much of mainstream political debate.