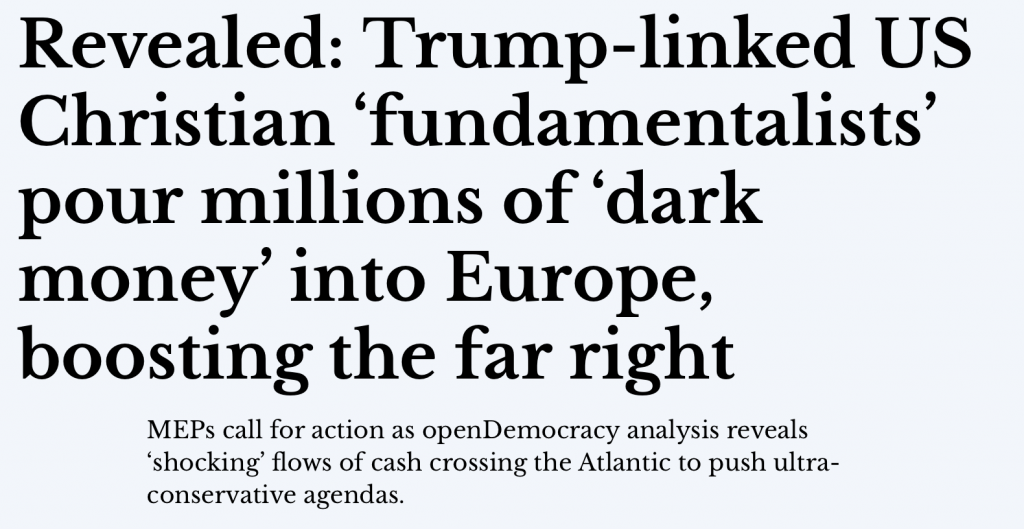 OpenDemocracy previously reported the dark money being used by US evangelists to finance “grassroots” pressure groups. But the story is much, much bigger.

US Christian right â€˜fundamentalistsâ€™ linked to the Trump administration and Steve Bannon are among a dozen American groups that have poured at least $50 million of â€˜dark moneyâ€™ into Europe over the last decade, openDemocracy can reveal today.

Between them, these groups have backed â€˜armiesâ€™ of ultra-conservative lawyers and political activists, as well as â€˜family valuesâ€™ campaigns against LGBT rights, sex education and abortion â€“ and a number appear to have increasing links with Europeâ€™s far right.

The SPLC explains that â€œviewing homosexuality as unbiblical or simply opposing same-sex marriageâ€ is not enough to be categorised as a â€œhate groupâ€. Groups on this list go further â€“ claiming that homosexuality is dangerous, linked to paedophilia and should be criminalised, disseminating â€œdisparaging â€˜factsâ€™ about LGBT people that are simply untrueâ€

This is, says SPLC, â€œno different to how white supremacists and nativist extremists propagate lies about black people and immigrants to make these communities seem like a danger to societyâ€

Joss Prior connects the dots between US fundamentalists’ dark money and UK anti-trans groups.

All the anti-trans groups and agitators in the uk, have at some time or another set-up crowdfunders and raised thousands overnight. Quite often filled with significant anonymous donations of 100s or 1000’s.

Ever wonder why there is a moral panic about trans people using toilets and sex-segregated spaces, even though trans people have had these freedoms since 2010?
Its because the argument is lifted from a different legal landscape, and people are earning by sharing regardless.

Back to the OpenDemocracy piece:

â€œThis is dark money coming into Europe to threaten human rights, and we’re not doing anything about itâ€, warned Neil Datta, secretary of the European Parliamentary Forum on Population and Development, describing the amounts of money involved as â€œstaggeringâ€.

â€œIt took the Christian right 30 years to get to where they are now in the White House,â€ he said. â€œWe knew a similar effort was happening in Europe, but this should be a wake-up call that this is happening even faster and on a grander scale than many experts could have ever imagined.â€