Thereâ€™s a well known trick in the bullshit community: if you give something a scientific or medical sounding name, you can persuade some people that bullshit isnâ€™t bullshit. Itâ€™s a technique used by quacks and scoundrels and rapacious corporations alike.

Todayâ€™s example is â€œrapid onset gender dysphoriaâ€, which is appearing in various right wing newspapers and on social media.

The idea is that the sudden visibility of trans people isnâ€™t because visible role models, online information and social media support encourages people to come out (hello!) when theyâ€™d previously stayed miserable in the closet.

No, itâ€™s because trans is a magic space disease you can catch from internets.

The Advocate does an excellent takedown of the supposed science:

The entire theory is based on a single poster abstract in 2017 by Dr. Lisa Littman. Poster abstracts are often published when not only is the material too weak to be a journal article, but of insufficient quality to even be accepted for oral presentation at a conference. As such, the academic bar for a poster abstract getting accepted is very low. It was, however, published in the Journal of Adolescent Health.

Littmanâ€™s abstract suffers from so many methodological flaws, logical errors, and unacknowledged biases that it fits firmly in the category of junk science.

Please do read the whole thing, but the executive summary is this: so-called rapid onset gender dysphoria is based on a survey of anti-trans activists on three anti-trans websites. Asked whether they believed being trans was something kids caught from the internet, those activists â€“Â who suggest being trans can be cured by yoga, among other nonsense â€“ said yes. Those responses were then used to “prove” that being trans is something kids caught from the internet.

The same “social contagion” argument was used to describe the increased visibility of left-handed people in the 20th Century. Look at the scary graph! 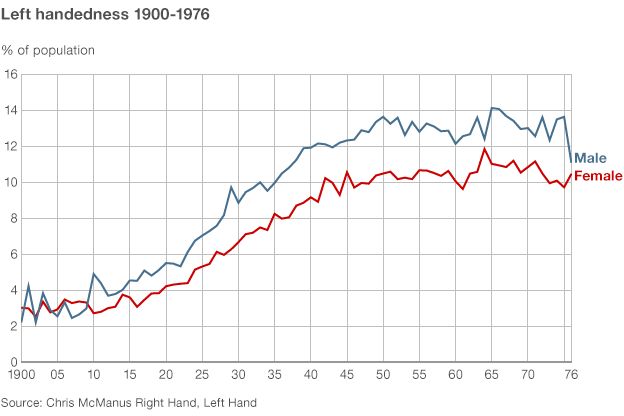 “The natural rate of left-handedness is around 10% or 11%, but the rate was pushed down artificially during the Victorian period,” says Chris McManus.

Not only would left-handed people have been encouraged not to be during this period, life was also pretty difficult for them and they quickly became very conspicuous.

“They went to work in factories using machines designed for right-handers – and the left-handers looked awkward,” says McManus.

“And then compulsory schooling came along and they were obliged to sit in classrooms and try and write with their right hand using an ink pen and they made a mess. The result of all of this was that left-handers became stigmatised – regarded as cack-handed, stupid.”

So, some of the people who had died on those Californian lists may well have been born left-handed, but spent most of their lives acting and identifying as right-handers.

What this so-called theory is trying to explain is something we already have a perfectly good term for: coming out.

Trans people are quite used to other people’s pseudoscientific bullshit. For example, a long-discredited theory called autogynephilia posits that all trans people fall into two categories: gay men who want to be women so they can have sex with men, and straight men who are turned on by the thought of being women. What about trans men? Theyâ€™re all confused lesbians.

That one has been kicking about since the 80s and is still used by anti-trans activists today despite being repeatedly and comprehensively debunked; if rapid onset gender dysphoria doesnâ€™t gain similar traction weâ€™ll get some other pseudoscientific bullshit claiming we have madeupitis, Shatnerâ€™s Bassoon Deficiency or some other invented condition that the quick to print and slow to think can put in their articles.

(The blog titleâ€™s from Lazyitis by Manchester band Happy Mondays)