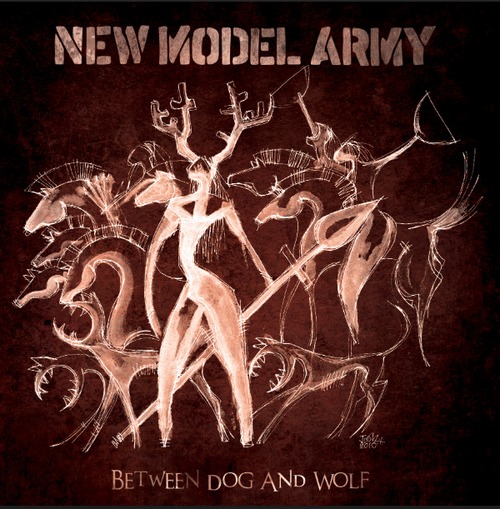 I got into New Model Army in Kilbirnie Library, in the late 1980s. I was going through a bit of a punk/new wave thing at the time, and the library’s collection of vinyl LPs included one whose cover was a painted leather jacket, the words “only stupid bastards take heroin” disguised but still recognisable on the shoulders. That’ll do me, I thought.

God knows how many times I played that record, or rather my illegally recorded cassette of it. It hasn’t aged particularly well, but then neither have I.

Lots of bands get described as quintessentially English – Blur, The Smiths, Pulp and so on – and I think it’s a shame that New Model Army don’t tend to get that kind of credit. Where famously English bands tend to be English in a metropolitan sense – chippy Mancs, boisterous cockneys (or mockneys) and so on – NMA are from another, different England. It’s more rural, I think, rooted in being miles away from “that which beckons to us all”, the lure of the cities when you live in a place where all too often Friday nights end up with friends “bleeding, yeah, queuing in casualty; staring at those posters we used to laugh at, never never land, palm trees by the sea.” NMA often connected with me in a way that more critically lauded bands didn’t.

(The lyrics I’m quoting are from Green And Grey, one of my favourite songs.)

I think part of the reason they didn’t get much credit is that New Model Army were, and to an extent still are, extremely easy to laugh at. They’re hardly pretty, and as if looking like a gap-toothed yokel wasn’t bad enough their singer was a Quaker who also occasionally called himself Slade The Leveller. Politically they were right-on but often came across as simplistic, so for example the chorus of early hit 51st State ( lyrics, to be fair, that they didn’t write) simply repeated “This is the 51st state of America”, while other songs echoed the Spitting Image parody of Paul Weller: “People are good / war is bad / vote labour / vote labour / vote labour”.

And many of their followers wore clogs, or at least looked like they would if given half a chance.

The thing is, though, when NMA were good, they were astonishingly good. Vagabonds is a wonderful song, Purity beautiful, Get Me Out thrilling, the aforementioned Green And GreyÂ transcendent. Poison Street is a great pop song, Today Is A Good Day a superb racket. I could go on…

And then I stopped paying attention. After 1990’s Impurity (a great album) and the following year’s Live album Raw Melody Men I think I just lost interest. My taste in music became more mainstream and stadium-y, I guess, my The The and New Model Army records replaced by U2 and REM and Happy Mondays and The Smiths.

I think they disappeared from the music press too: in those pre-internet days if bands didn’t have a profile in the inky music weeklies they might as well not exist. I’m pretty sure that as far as NME and Melody Maker were concerned, NMA were part of the crusty, dog-on-a-string genre that only bumpkins would like, so coverage would be minimal at best. It’s easy to lose track of bands in those circumstances, and lose track I did.

This year, I discovered that NMA had a new album out, Between Dog And Wolf. I bought it, devoured it, and I reckon Q was right when it said it was a return to form: all the things people don’t like about NMA are present and correct (it’s a bit overwrought sometimes, I can see why Justin’s accent might put some people off, a few songs don’t quite work), but when it’s good it’s really good. The tour to promote it has been an eye-opener too. NMA may have been kicking around for around 30 years now, but they’re a ferocious live band.

More often than not, I’ll go and see a band I used to love and I’ll leave the gig dejected: they weren’t as good as I hoped they’d be, let alone as good as I remembered. But NMA were different. I hadn’t seen them since the turn of the century, and they’re better now than they ever were. They’re threatening to tour again next year. I might invest in some clogs.