LGBT Youth Scotland has published its latest survey of LGBT+ young people, Life In Scotland For LGBT+ Young People in 2022. And while some things have got better â€“ people coming out to their families and friends are more likely to receive a positive response than ever before â€“ some of the most important things have got significantly worse. This graph tells a terrible story: 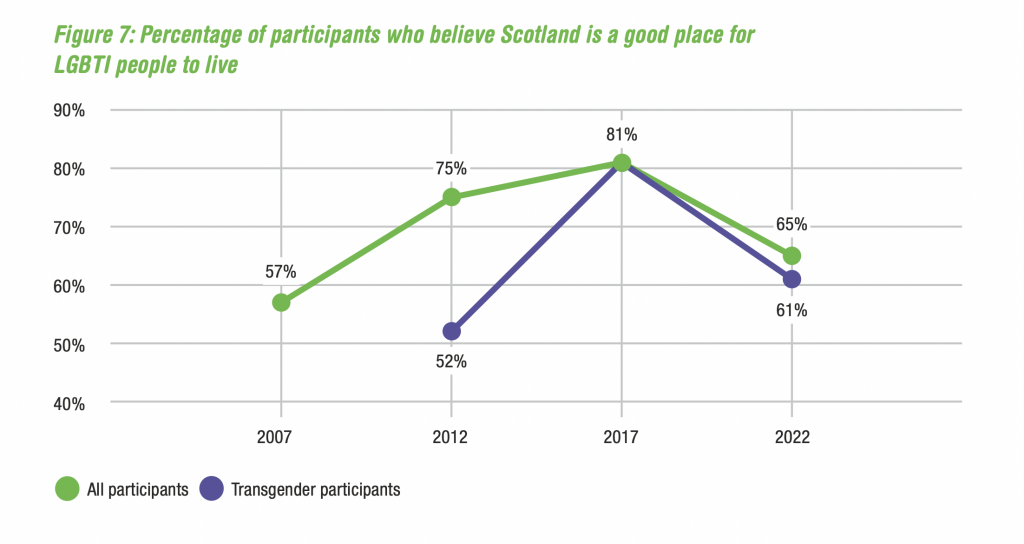 The image is a graph showing how LGBT+ people felt about living in Scotland, and as you can see there was steady progress from 2007 to 2017: the percentage of people who believed Scotland is a good place for LGBT+ people to live rose from 57% in 2007 to 81% in 2017. But that progress has gone sharply into reverse, and five years on we’re almost at the levels of fifteen years ago.

There are two likely explanations for that. The first is that since 2012, and particularly since the “transgender tipping point” of 2014/5, the long-predicted crisis in trans healthcare (more people coming out; insufficient staffing and funding for trans healthcare services, many of which were already substandard and overwhelmed) has kicked in: waiting lists for my gender clinic in Glasgow have trebled since I referred in 2016.

The other explanation, which would explain why 2017 in particular was when LGBT+ people started to feel much less safe in Scotland, is simpler. That’s when the Scottish and national press and many high-profile social media users joined the Christian Right in its war on “gender ideology” with trans people as the first, but not the only, target. Fifteen years of progress have been undone in five years of scaremongering by people who want to make Scotland hate again.