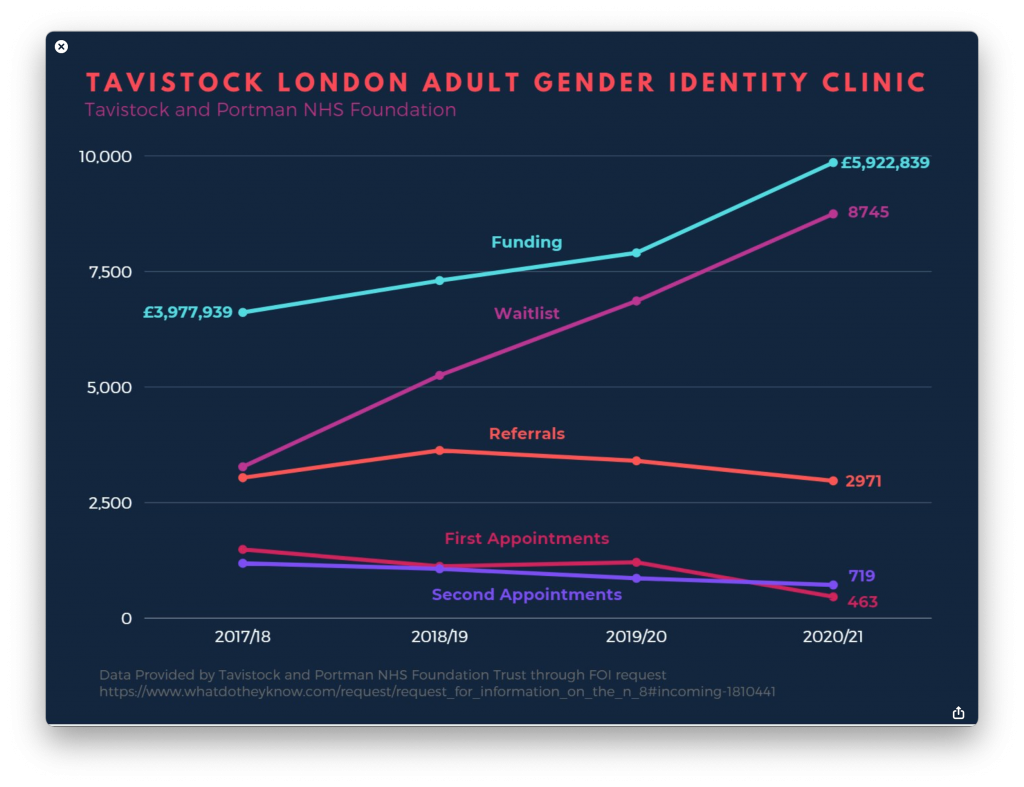 The image above is a graph showing the Tavistock London Adult Gender Identity Clinic’s performance since 2017. In the last four years its finding has increased from just under Â£4m to just under Â£6m while the number of people being referred to the service has fallen. And yet the number of people being seen by the clinic is getting smaller and smaller, sending the waiting list into orbit.

Other gender clinics aren’t quite as bad, but they’re still bad. NHS referrals should take no more than 18 weeks; for trans people, 3-4 years is considered quick. Once again the reality is very different from what the newspapers are telling you.

As I’ve written before, there is no reason why trans healthcare should be separate from cisgender people’s healthcare or why trans people should wait 31 years for something they could discuss with their GP tomorrow.

In the four years I’ve been under the supervision of that clinic I’ve never met an endocrinologist, a doctor specialising in hormones; my prescriptions have always been written by psychologists. Which perhaps explains why one of them made a massive mistake in one of mine, a mistake that would have had awful consequences if I hadn’t spotted it.

This is just gatekeeping. There’s nothing wrong with me psychologically; being trans isn’t a mental illness. And yet medicine and referrals that my GP is perfectly qualified to deliver for cis people are somehow transformed into mysterious unknowable magic because I’m trans. Other countries don’t do things this way because it’s completely nonsensical: it’s based on a system where you’re considered a fraud until you convince enough people otherwise.

This is the reality of trans healthcare in the UK. While health secretary Savid Javid plays the transphobia card for cheap political points, trans healthcare under the NHS is scandalously unfit for purpose and causing needless misery for far too many people.