How’s this for a TV show? We get a racist â€“ a proper racist, ideally a knuckle-dragger from a really racist organisation such as the EDL or Britain First, someone who’s really loudly and proudly racist and spends loads of time being really racist to people on Twitter â€“ and we pair him up with a nice middle-class Black woman. Then we get the two of them to sit down for a nice dinner and a chat and we film the whole thing.

I haven’t even got to the best bit yet. It’s not just a chat. We give the racist guy a script of really racist things to say to the Black woman over dinner and we film her response. Maybe she’ll cry! Â Maybe she’ll walk out! Maybe it’ll go viral!

No? How about we pair a neo-nazi with a nice Jewish lady?

Of course not. Trying to get a fight for ratings is disgusting, as we saw with the Jerry Springer and Jeremy Kyle shows. But that doesn’t mean TV production companies don’t keep trying to bring back the formula, which is essentially hating for ratings. For example, an Irish TV company is currently sending this to various trans women (and to other marginalised groups, such as members of the travelling community). 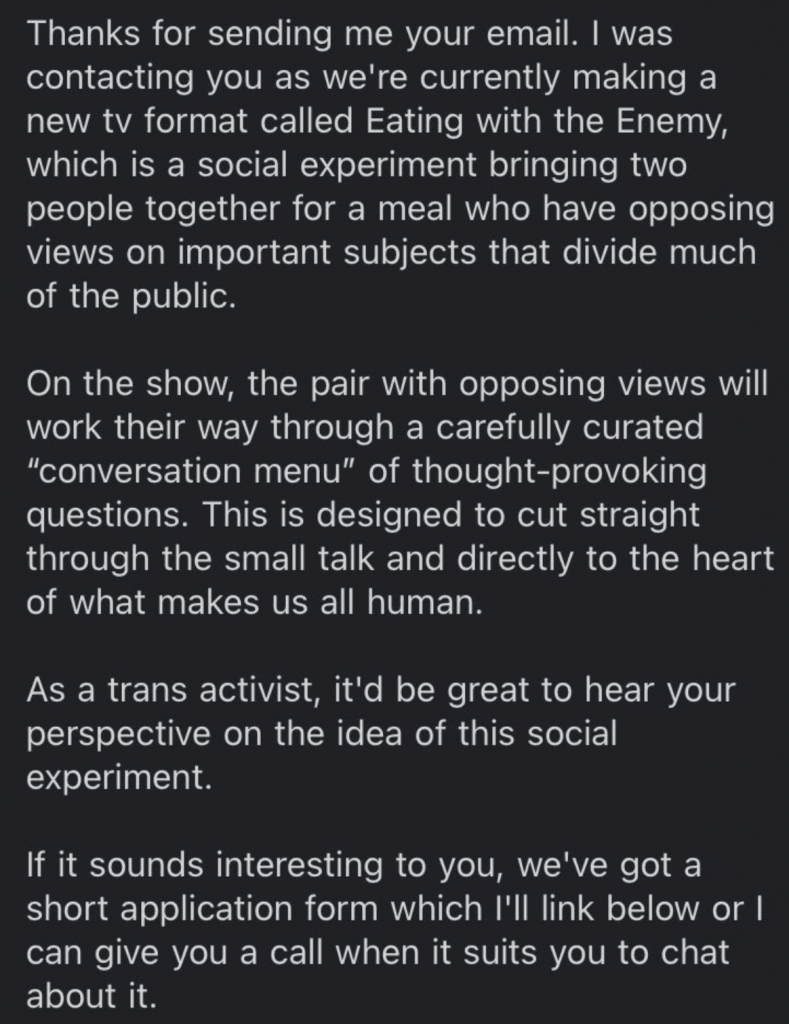 As one commenter on Twitter translated: â€œWeâ€™re making a show where we have members of marginalised groups sit down with people who think they shouldnâ€™t exist, for entertainment purposes. Also weâ€™re suggesting that marginalised people are the enemy, in the title.â€

Earlier this year Evgeny Shtorn wrote about the importance of storytelling in regards to minority and marginalised people.

Considering how powerful storytelling is, we cannot pretend that the infrastructure built around it by media and researchers is always ethical and respectful towards those who constitute those stories…Â journalists were rude to me, disrespectful and abusive. Using my words or ideas without quotes, giving erroneous interpretations and false promises. Trans and non-binary people, homeless people, other migrants, people of colour, people with disabilities and a lot of others who I shared my concerns with, told me that they often experienced similar treatment from journalists, but also from artists, researchers and other â€˜supportersâ€™. It is called â€˜cognitive exploitationâ€™, and this is exactly the opposite to the idea of the empowerment of the community through storytelling.

…The problem is that after such an interaction most people retreat into their closet and donâ€™t want to tell their stories anymore, despite those stories being so important to tell.

There was an example of this in England the other day: trans person and poet Jay Hulme was invited on BBC TV to discuss the government’s response to GRA reform.

I was going to be on the BBC today having a chat about the GRA – but I pulled out yesterday, having been informed that it’s BBC policy to have a cis woman invited to speak on any segment about trans ppl – I’m not going on TV to be yelled at by a transphobe from the Daily Mail.

By “cis woman” the policy doesn’t mean a cisgender woman who’s supportive of trans people, even though such women are the majority (and were the majority in the GRA reform consultation too). It means the kind of woman trans commentator Shon Faye was expected to go on air with this week. FayeÂ was one of several trans people invited on BBC Woman’s Hour to discuss gender recognition. At the last minute, the panel was expanded to include an anti-trans activist who has taken great delight in publicly misgendering her and who Faye says even shared a now-deleted defamatory petition implying she groomed children. Faye declined the invitation.

I have some experience of this. I’ve refused to go on multiple programmes because the approach was clearly going to be gladiatorial, not editorial; other contributors were not people with concerns about specific bits of legalese but members of groups who peddle hatred on social media. Taking part is therefore a trap for marginalised people: if you don’t robustly challenge the other contributors they get to lie, lie and lie some more; if you do, and worse still if you also dare correct the presenter, you’re dismissed as unreasonable and aggressive. And even the most innocuous appearance will have bigots descending on your social media.

It’s clear that the people commissioning and structuring these programmes are thinking about ratings, not the damage these narratives can do to marginalised groups. And they are doing damage. By presenting extreme views as mainstream, such as perpetuating the myth that the two sides of the trans debate are “trans activists vs feminists” rather than “most of the country vs a few well-connected bigots”, they’re fanning the flames of intolerance and positioning extreme views as if they’re mainstream. We’ve seen this before with the platforming of far-right views, of anti-vaxxers and of climate change denial.

The problem yet again is that the people making these programmes have no skin in the game. Their human rights are not under attack. Their safety is not threatened by the rise in hate crimes. Their ability to participate in society is not something producers think should be up for debate. To them, it’s just another item. To marginalised and demonised minorities, it’s our lives.