Many things we know are wrong

If you’ve read this blog for a while you’ll know I’m fascinated by Internet Facts, things that everybody believes but that aren’t true â€“ such as the story claiming singer Mariah Carey, when asked about famine, said “I’d like to be that thin, but without all the flies and death and stuff”.

Another good example of that is Queen Victoria and lesbians. According to legend, she refused to sign a bill criminalising same-sex relationships until references to women were removed; according to the monarch, “women do not do that sort of thing.”

It isn’t true. The law in question was the Criminal Law Amendment Act 1885, and it never referred to women: it didn’t initially mention gay people at all until an amendment by a liberal MP criminalised “gross indecency” between two men.

Another, similar legend about the Victorians claimed that they were so prudish that they covered up table and piano legs for fear of accidental arousal. That one isn’t true either: it was a very dubious claim by writer Frederick Marryat in the mid-1800s.

Marryat visited a girlsâ€™ seminary where he discovered the pianoâ€™s legs were shrouded in little ruffled pantaloons. The headmistress told him sheâ€™d covered the legs to â€œpreserve in their utmost purity the ideas of the young ladies under her charge.â€

Either the headmistress was something of a kook or Marryat got punked. Thereâ€™s no evidence in the historic record that this supposed custom was widespread. In fact, the pretty pantaloons were most likely dust covers, concealing damage, or mere decoration.

The British press at the time picked up Marryatâ€™s story and ran with it, since American society and its straight-laced, puritanical, overly fastidious, ludicrous manners were considered gauche and far inferior to their cousins across the Pond.

The British press printing bullshit because it enabled them to perpetuate prejudices? Pass the smelling salts! I feel all giddy!

One of the reasons these things endure is because they feel true: they chime with what we know, or think we know, about the era or people concerned. So the fake quote from Mariah fits the image of a callous, air-headed diva; lesbians and sexy piano legs chime with our image of sexually repressed Victorians.

But of course, what we think we know is wrong. Mariah Carey is much smarter and apparently much nicer than we think she is; many Victorians were off their face on hard drugs and going at it like knives.

The comedian Stephen Colbert coined the term “truthiness” to describe something that may feel true, but that isn’t. As Wikipedia puts it:

Truthiness is the belief or assertion that a particular statement is true based on the intuition or perceptions of some individual or individuals, without regard to evidence, logic, intellectual examination, or facts. Truthiness can range from ignorant assertions of falsehoods to deliberate duplicity or propaganda intended to sway opinions.

There’s a good example of that doing the rounds on social media right now. “I never knew of any trans kids when I was young, just old trans people” the post says. “So where are all these trans kids coming from now?”

Same place the old trans people came from. But now, people are less likely to wait their whole bloody life before coming out.

When I was a teenager, to the best of my knowledge there were no gay, lesbian, non-binary or trans people in my town. But of course there were. They kept their identities very secret because they didn’t want their heads kicked in.

This was the era of the Sunday Times claiming AIDS was a gay plague, of Piers Morgan outing pop stars as “poofs”, of the Murdoch press demanding lesbians be banned from girls’ changing rooms because they were dangerous predators.

I’ve mentioned before the response of one anti-trans activist to the idea that trans people have existed since long before she was born. “But I’m 42!” she said.

We were always here. You just didn’t see us, because for many of us being seen meant being targeted. So we stayed hidden.

I was talking to someone a few days ago about their aunt, who’d Â tried her whole life not to be trans. She did the hyper-masculine stuff that many trans people did: theÂ militaryÂ career, the body building, the hard drinking and risk-taking. But you can’t outrun yourself, and when she finallyÂ came out very late in her life she was transformed: happy at long last.

There are many sad stories like that one. She was trans her whole life and spent almost all of that life fighting it, too scared to let anyone know until so late in her life that she didn’t get to spend much time being herself.

She was a trans kid. So was I. So was every late-transitioning adult. You didn’t know about us because we didn’t know it was okay to be us, because it wasn’t safe to be us.

We were always here. You’re only seeing us now becauseÂ more of us feel that it’s safe, or at least safer, to be out. Information we were denied when we were younger is freely available. Support exists that didn’t before. There are communities that will welcome us when family or friends reject us. We can see that there are many others like us.

If people really cared about the wellbeing of kids, they’d be pushing for better trans and non-binary healthcare, for counselling services that don’t have years-long waiting lists, for people to be given the help they need to discover who they are â€“ whether cis, trans or non-binary: the only outcome that should matter is whether the child is happy and supported, irrespective of how they identify. But these people don’t campaign for that. They campaign to remove the little healthcare that’s available. To remove hard-won rights. To make everyday life so difficult that trans and non-binary people stay in the closet. Better a miserable, repressed, self-hating kid than a trans or non-binary one.

As the banner (pictured) puts it: “we don’t want your cis kids to be trans. We want your trans kids to survive.”

It’s sad that even that low bar is too much for some. I don’t just want your kids and my kids to survive. I want them to thrive, however they may identify. 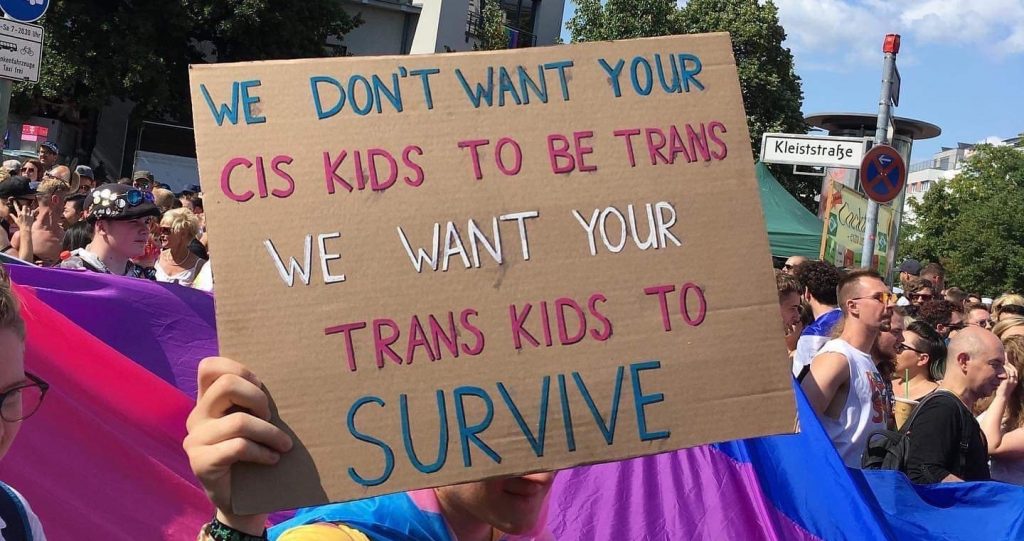