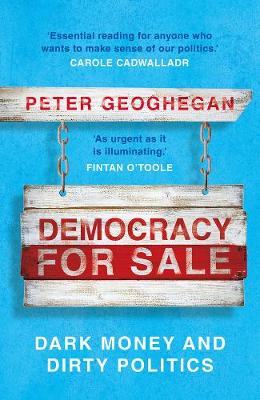 I’ve just finished reading Democracy For Sale by Peter Geoghegan. It’s a fascinating and forensic analysis of the corrupting effect of dark money on British politics, and it left me thoroughly saddened: the toxic combination of big money and big tech is having a ruinous effect, and I don’t see a light at the end of this particular tunnel.

Itâ€™s a compulsively readable, carefully researched account of how a malignant combination of rightwing ideology, secretive money (much of it from the US) and weaponisation of social media have shaped contemporary British (and to a limited extent, European) politics. And it has been able to do this in what has turned out to be a regulatory vacuum â€“ with laws, penalties and overseeing authorities that are no longer fit for purpose.

Written in crisp, vivid prose, Democracy for Sale is a dense but compelling narrative that takes us from the backstreets of Washington DC to Viktor OrbÃ nâ€™s Hungary. Above all, it is a call to arms, and everyone who is concerned about our democracy should read it.

While Geoghegan remains an optimist, he does not hide the scale or urgency of the challenge. â€œLike the climate, democracy is fast reaching a tipping point,â€ he warns.