The Morning Star has decided to prove once again that you don’t have to be right-wing to be hateful towards trans people. This is from the print edition: 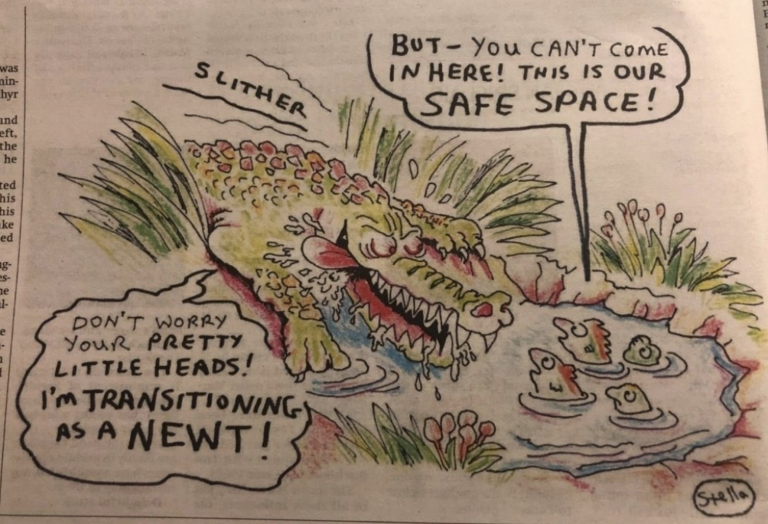 There’s a sour joke among trans people that anti-trans bigots have one joke, which is “I identify as / I’m transitioning to X”. But it isn’t usually portrayed in quite such a vicious manner as it is here.

we can’t believe an allegedly socialist newspaper would publish something as vile as this.

It heavily borrows from racist propaganda you see in a history book and hope never to see in real life. On a paper funded by unions. We condemn this completely.

This, in a supposedly leftwing newspaper, is absolutely twisted. The vicious, obsessive and unrelenting campaign against trans people is sadly far from confined to the right.

This particular publication has been publishing virulently anti-trans stuff for several years now, but what’s different this time is it has apologised. From the website:

The Morning Star apologises unreservedly for the publication last Tuesday of a cartoon which was offensive to trans people.

The cartoon had not been authorised for publication and its appearance in the print edition represents a failure to follow our own procedures for approving submissions.

Maybe it’s true and editorial standards at the Morning Star are so lax that cartoons can just leap into the pages without anybody knowing. But Occam’s razor suggests that what really happened here is that the publication simply didn’t expect a backlash from any cisgender people after several years of running articles saying pretty much the same thing as the cartoon.

The myth that being trans is a lifestyle choice, that basic rights for trans people put other people in danger, is entirely invented. Here in the real world, being trans makes you a target. This was published this week too:

BBC: A man has been jailed for setting fire to the home of a transgender woman after saying: “Anyone who is a tranny offends me”.

Lee Harrison, 43, set light to the front door of her flat after trying to pour petrol through the letterbox.

The woman’s flatmate, who was in at the time, said she “truly believed she was going to die”.

Harrison, of Hallowmoor Road, Sheffield, was jailed for more than five years.

Prosecutor Robert Sandford said the attack on 15 August was born out of a “hostility based around the fact [the victim] was in the process of transitioning from the male to female gender”.

He said Harrison would call the victim “Steve” in the street and previously told her, “Anyone who is a tranny offends me; it’s a lifestyle choice.”