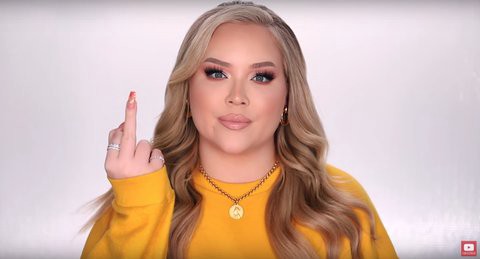 Popular YouTube beauty blogger Nikkie de Jager, aka NikkieTutorials, has come out to her many millions of followers as transgender.

It wasn’t her choice: as Stylist magazine points out, she came out because unnamed persons were threatening to “out” her to the press.

That isn’t just a gross invasion of privacy, although of course it is: somebody’s decision about when (or if) to come out and who to come out to is entirely their business, and being outed or forced to come out can mean having to deal with a lot of really big stuff before the person is ready or able to deal with it. Coming out is hard even if you are ready and do have support; it’s harder still if you aren’t and don’t.

Outing somebody is also very dangerous.

Online harassment and abuse of transgender people has been on the increase in recent years, and it has been especially prevalent on YouTube.

While the initial reaction to de Jager’s announcement has been positive, she’ll now receive transphobic abuse on every YouTube clip she posts â€“ and she may experience worse.Â High profile trans women are often on the receiving end of terrible online abuse, some of it orchestrated by even higher profile Twitter users who send the mob after anyone they disapprove of. The abuse some LGBT+ people experience online has led them to take their own lives; the fear of it has led others to do the same.

the tabloids were able to destroy my professional career and even my personal life, fueled by the ignorant thinking about transgender people in mainstream society and the laws of those times.

It was a similar story for Tracey Africa and April Ashley, who were also outed by the tabloids. Vice:

De Jager might have been the one to release her coming out video, but only after her would-be blackmailers forced her hand. Four decades after a hairdresserâ€™s assistant outed Tracey Africa on the set of an Essence shoot and News of the World published Caroline Cosseyâ€™s backstory without her consent, transness remains a liability to a womanâ€™s career, one that can be weaponized against her even if she chooses not to make it known.

This, incidentally, is one of the reasons we have the Gender Recognition Act in the UK: under Section 22 of the Act it’s an offence for someone in an official capacity to disclose that the possessor of a Gender Recognition Certificate has a trans history, for example by selling the story to a tabloid newspaper (although here’s a fun fact: the number of prosecutions brought under Section 22 in the 16 years since the law was introduced is zero).

Of course, the threat of outing by the tabloids has long been used not just against trans women, but against LGBT+ people more generally. Just this month Lib Dem MP Layla Moran was forced to come out as pansexual because the newspapers were about to out her.

over the last couple of months journalists have been sniffing around this story. They’ve asked friends, made indirect approaches, and more recently, very direct approaches to people I know, asking for information about my personal life.

One of the newspapers that was about to out her, the Mail on Sunday, then accused her of “weaponising” her sexuality to “look woke” and quoted the usual rabble of Mumsnet trolls saying awful things. Hell hath no fury like a tabloid deprived of its salacious scoop.

And salacious is all that it is. What kind of people Layla Moran loves, what genitals Nikkie de Jager was born with, are none of our damn business. Moran isn’t hypocritically pushing an anti-LGBT+ agenda in her politics; de Jager’s history is not relevant to her celebrity. And yet the tabloids and their demonic helpers will happily expose and potentially damage their private lives for a fast buck because web clicks matter more than ethics.

Many of us will look back at the 80s outing of Caroline Cossey and consider it a despicable invasion of privacy, but in 2020 the tabloids are still doing it. Not only that, but they’re approaching LGBT+ people with Hobson’sÂ choice: try to stay closeted and we’ll out you; spoil our scoop and we’ll do our best to destroy you.

Itâ€™s possible that to some journalists and readers this is a jolly jape where they get one over me, but to me, this is my life.