Another powerful and desperately sad book 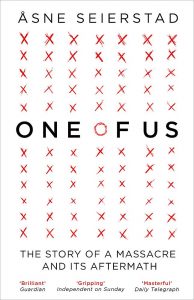 I’ve just finished One Of Us by Ã…sne Seierstad. It’s very similar to Dave Cullen’s Columbine in that it’s an incredibly powerful piece of non-fiction about a massacre largely inspired by white supremacist rhetoric. In this case, the massacre is the 2011 bombing and subsequent gun massacre by Anders Brevik, who slaughtered 77 people.

It’s an extraordinary, shocking and upsetting book that tells the stories of the victims as well as the story of the massacre and the utter incompetence that enabled Breivik to kill so many people; as a piece of journalism it’s an incredible work.

It’s also deeply chilling. Breivik is seen as a hero in some right-wing circles and has been the inspiration for subsequent shootings, and the beliefs that radicalised him are commonplace in our mainstream and social media today.

Breivik was particularly enamoured of the UK writer Melanie Phillips, who he quoted multiple times in his poisonous manifesto. Phillips is famous for writing guff like this:

The traditional family […] has been relentlessly attacked by an alliance of feminists, gay rights activists, divorce lawyers and cultural Marxists who grasped that this was the surest way to destroy Western society.

Cultural marxism is an anti-semitic term based on an anti-semitic conspiracy theory dating back to the 1920s. Breivik used it over 600 times in his manifesto. It appears with similar frequency in the Daily Mail.

The theory of cultural Marxism is also blatantly antisemitic, drawing on the idea of Jews as a fifth column bringing down western civilisation from within, a racist trope that has a longer history than Marxism. Like the Protocols of the Elders of Zion, the theory was fabricated to order, for a special purpose: the institution and perpetuation of culture war.

…It allows those smarting from a loss of privilege to be offered the shroud of victimhood, by pointing to a shadowy, omnipresent, quasi-foreign elite who are attempting to destroy all that is good in the world. It offers an explanation for the decline of families, small towns, patriarchal authority, and unchallenged white power: a vast, century-long left wing conspiracy.

Breivik was an islamophobe, but his targets were not Muslims: they were left-wing kids he believed were “cultural Marxists”.

As Dr Arun Kundani wrote about Breivik’s manifesto in 2012:

The bulk of the document constitutes a compilation of texts mainly copied from US far-Right websites… These writers are paranoid conspiracy theorists who claim Islam is a totalitarian political ideology that aims at infiltrating national institutions in order to enact sharia law. Like Breivik, they blame Western elites for pandering to multiculturalism and enabling â€œIslamic colonisation of Europeâ€ through â€œdemographic warfareâ€.

…It would be easy to dismiss Breivikâ€™s beliefs as the ramblings of a man gone insane. But that would be to ignore the danger they represent. His case demonstrates that the new â€œanti-Islamistâ€ far-Right is as compatible with terrorist violence as older forms of neo-Nazism. And, whereas neo-Nazism is a fringe phenomenon, anti-Islamism attracts wide support, including among mainstream politicians, newspaper columnists and well-funded think-tanks.

As Ian Buruma wrote in his review of One Of Us:

…what about the ideas that inspired Breivik? To be sure, the likes of Spencer, Wilders orÂ Bawer do not preach violent revolution. They never told anyone toÂ kill a Muslim, let alone a â€œcultural Marxistâ€. But their talk of war, of a Muslim threat to our civilisation, â€œEurabiaâ€ and of the complicity of cultural elites in our imminent downfall, does create a toxicÂ climate in which fantasists such as Breivik can find a justification for their horrible deeds.

Breivik may or may not be a madman. The court psychiatrists in Oslo differed on this. In the end it was decided that he was not. But that ideas have consequences cannot be denied. This book throws a great deal of light on the life and times of a miserable killer. That he had a sick imagination is clear. More is to be said about the ideas that fed it.

The pattern is becoming frighteningly familiar: A white man, radicalized online at alt-right media websites and through social media into hateful white nationalist beliefs built around the anti-Semitic conspiracy theories about â€œcultural Marxism,â€ walks into a mass gathering of his selected targets (which can be any of the perceived participants in the conspiracy, including liberals, Jews, Muslims, Latinos, any nonwhite person, LGBTQÂ folk, even moviegoers) and opens fire.

Neiwert describes what he calls “chain terrorism”, where murderers such as Breivik and the people who inspired them go on to inspire the next generation of mass murderers.

Brian Levin of the Center for the Study of Extremism and Hate at CaliforniaÂ State University, SanÂ Bernadino,Â says the newer dynamic replicates the old content, but everything happens with much greater speed. â€œIn pre-Internet days, the violent extremist act itself of neo-Nazis and white supremacists was considered messaging and labeled â€˜propaganda of the deed,â€™â€ he told Daily Kos.Â â€œToday, sociopaths, particularly ideological ones, are seeing social media not just as a radicalizing and messaging tool, but also as an archive of a folkloric warrior narrative,â€ he continued.Â â€œOnce they too act out, they have a link to notorious killers of the past, where their new manifestos are inscribed in a continuing perverseÂ online subculture of scripted violence.â€

As Neiwert writes, a specific anti-Semitic narrative about â€œcultural Marxismâ€ â€” meaning â€œMarxism translated from economic into cultural termsâ€ by a cabal of Jewish intellectual Ã©migrÃ©s from Nazi Germany known as the Frankfurt School â€”Â is motivating these massacres, whose victims have included Muslims in New Zealand as well as Jews in America.

This is a narrative Donald Trump has long echoed, especially with his attacks on â€œpolitical correctness.â€ For potential terrorists, itâ€™s also embedded in a very specific, dynamically evolving matrix of right-wing political activity and institutions that marks out a wide range of other targets for retribution, up to and including mass murder.