Living in a burning world 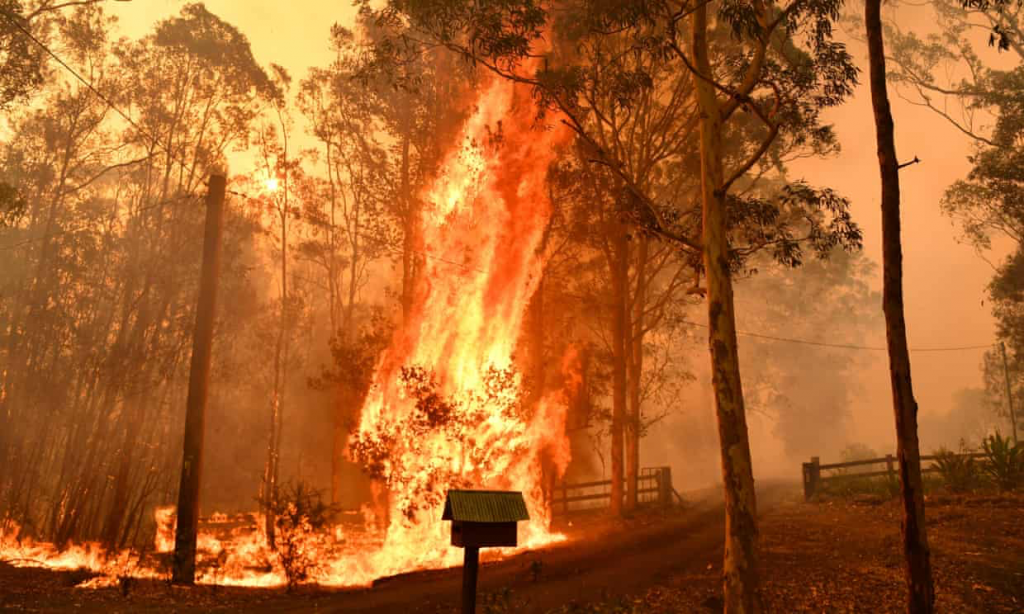 When I was a kid, I used to devour apocalyptic fiction: give me a shattered society trying to survive in a nuclear winter and I’d be all over it.

One of the most frightening ones I read was Nevile Shute’s On The Beach, which truly terrified me. Â It’s set in Australia in the aftermath of a nuclear war, with the characters awaiting the inevitable arrival of the radioactive fallout. It gave me nightmares.

It’s not as frightening as this article.

The article is also about Australia, and about people stoic in the face of a man-made disaster. This one isn’t nuclear war, though. It’s fire.

Our weather apps now carry dotted lines across the shining sun: smoke haze. We learn the meaning of â€œtemperature inversionâ€, in which warm air traps cool â€“ and smoke â€“ beneath it; our weather reports now carry air quality ratings. For the past month theyâ€™ve ranged from â€œpoorâ€ to well beyond â€œhazardousâ€. In news updates about the fires, itâ€™s now commonplace to hear two horrific phrases: â€œseek shelterâ€ and â€œtoo late to leaveâ€.

…The fire danger warnings have a new category. Colours at the low-danger end are green, moving through yellow and orange. The new one is a deep, malevolent red with black stripes, and itâ€™s called â€œcatastrophicâ€.

On the first catastrophic warning day thereâ€™s a palpable fear, because even expert firefighters have never seen anything like this. The winds are completely unpredictable. Nobody knows what will happen.

The writer, Charlotte Wood, is well aware that her article centres the relatively affluent city-dwellers, not the poorer people who’ve been affected by these fires in much more devastating ways.

…as the days and weeks pass, here in Sydney the mood changes from disbelief to hypervigilant fear to a kind of WTF petulance. Itâ€™s still happening? Weâ€™re used to turning our attention briefly, intensely, to â€œthose poor peopleâ€ affected by climate change, then returning to normal life. Now those poor people include us.

Internet fights break out over whether itâ€™s obscene to complain about the smoke. Of course it is; weâ€™re lucky, we of the middle-class inner city. I can afford to buy a new Ventolin once a week, for example. I have time to do each load of laundry thrice before it smells clean. My work doesnâ€™t force me to remain outside, breathing in this shit all day long. And of course, no fires have visited inner Sydney. None of ours are among the 600-plus homes burnt to the ground. None of us are among the dead.

But even as this is happening, right-wing politicians pretend it’s business as usual.

The prime ministerâ€™s family lives here in Sydney; surely by now the man must be saying something? I checked his social media pages. Prime minister Morrisonâ€™s Instagram account carried grinning images of him â€“ baseball cap in place – atop a ladder, draping his family home in twinkly Christmas lights. No matter whatâ€™s going on each year, says the PM of a burning nation, getting in the Christmas spirit has always been such an important part of our family life.

But it’s not business as usual. The 2010s were the decade when our planet burned. From Wired:

This year, for example, wildfires in the Arboreal forest ringing the Arctic were unprecedented in both intensity and latitude, according to The World Meteorological Organisation (WMO). The organisation says that the Earthâ€™s boreal forests are now â€œburning at a rate unseen in at least 10,000 years.â€

And fires pump more CO2 into the atmosphere, creating a terrible feedback loop.

In Brazil, wildfires â€“ which have been at the most intense since 2010 â€“ released the equivalent of 228 megatonnes of carbon dioxide. In an atmosphere already chock full of pollution, this is, of course, bad news.

There is much more bad news where that came from.Â And our response is to decorate our Christmas trees and pretend everything is okay.

We’re going into an election here where the PM can’t be arsed taking part in a climate debate; no wonder. Under the Conservatives we’re going to miss our extremely tame 2020 climate targets. We’re failing to meet our modest commitments to tackling carbon emissions, pollution, waste and overfishing. We’re also going to miss our 2050 emissions target.

We worry about Bags for Life and paper straws, tinkering with things that don’t matter while the world burns and the rich and powerful tell us not to believe the science and to keep on consuming and polluting and trashing the only home we’ve got.

From On The Beach:

You could have done something with newspapers. We didn’t do it. No nation did, because we were all too silly. We liked our newspapers with pictures of beach girls and headlines about cases of indecent assault, and no Government was wise enough to stop us having them that way. But something might have been done with newspapers, if we’d been wise enough.

The apocalyptic novels of my youth were supposed to be fiction of the most pessimistic kind. They’re starting to feel horribly real.