When people show you who they are, believe them

There’s a famous quote by Maya Angelou: when someone shows you who they are, believe them the first time.

So I’m not joining in today’s surprise that Rod Liddle has written another hateful, racist piece for the hateful, racist Spectator. Liddle showed us who he was when he accepted a police caution for punching his pregnant girlfriend in the stomach, when he was found using a pseudonym to post racist remarks on football forums, and in pretty much every column he’s ever excreted for The Spectator and other vile rags.

Here in Scotland, a whole bunch of people have decided to show who they are thanks to a fabricated furore over a census question.

If you haven’t actually seen the question, here’s a screenshot from the census’s quality testing report, which this entire story has been based on. 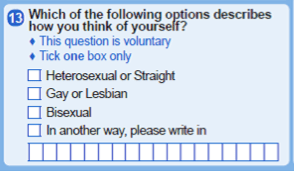 The above question has been reported as the PC lobby forcing Scots people to choose from a “baffling” list of 21 sexualities. The reality is much more tedious. The list is for autocorrect entries so that if people choose the “another way” option, it’ll offer some other suggestions (and help harmonise the data by ensuring consistent spelling).

The story originated in the Murdoch press and was quickly picked up by the Scottish Daily Mail. We already know who these publications are, but they’re showing us again.

The Sun story is around 650 words. Its interviewees are an anti-trans academic and activist (this story has no connection to trans people at all), an unnamed Tory spokesperson, an evangelical anti-LGBT+ Christian group and the Catholic Church. The Daily Mail sought comment from an additional, extremely fringe, anti-feminist, anti-LGBT evangelical group who railed against “gender madness”, even though the story has no connection with anybody’s gender.

You’d think such obvious, politically motivated culture war framing â€“ concoct a story about so-called identity politics, get the evangelical rent-a-gobs to damn it, tell your readers that the queers have gone too far this time and encourage them to post foul homophobic and transphobic vitriol in your comments sections â€“ would prevent grown-ups from sharing it.

But you’d be wrong. People who previously limited their online abuse to abusing trans women, including senior newspaper journalists, bloggers and political figures, have seized upon this non-story, abusing the entire LGBT+ community for something the Murdoch press made up and standing proudly alongside some of the most viciously anti-women, anti-LGBT groups in the country.

They showed trans people who they were months and in some cases years ago. And now they’re showing you.

When people show you who they are, believe them.