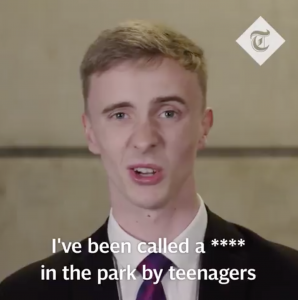 I sometimes wonder if a master satirist has seized control of parts of the mainstream media. How else to explain the Telegraph’s video that asks us to consider the plight of poor, marginalised, oppressed… Tories?

I’m not joking. The video tells us that the only safe space â€“ a term the Telegraph despises, yet uses without irony here â€“ for young Tories is the Conservative Party Conference. It even pauses to show us the terrible headline: Abused for being a Tory.

In one particularly traumatic event, one young man was called “a *** in a park” by teenagers, presumably of the ruffian variety.

Oh Lordy, trouble so hard, don’t nobody know their troubles but God.

To be fair, the video does include someone saying that they have been told to kill themselves by strangers on the internet. And as someone who has also been told to kill myself by strangers on the internet â€“ interestingly, strangers whose post history indicates that they are Tory supporters; my goodness isn’t that a strange coincidence what are the chances etc etc etc â€“Â I know how upsetting that can be.

If these people are being abused randomly online or in public then of course that’s unacceptable.

You knew there was a but coming.

But it seems a bit off to complain that people accuse you of racism, sexism and homophobia if you’re out canvassing for a party that’s clearly racist, sexist and homophobic.

That’s not to say these particular young people are any or all of those things. I’m quite sure the Telegraph has carefully selected them and checked their social media history to make sure they haven’t publicly posted the kinds of terrible, despicable, bigoted things that, er, their party leader would put in a Spectator column.

The abuse they’re getting is probably because they publicly support the party of benefit cuts and hostile environments, the party of Windrush and of slashed spending on disabled support and mental health services, the party of austerity and an enfeebled NHS, a party whose Prime Minister has said terrible things about ethnic minorities and LGBT+ people and whose cabinet largely voted against equal marriage.

It’s a bit like complaining that people are calling you a Nazi just because you’re goose-stepping around the place in a Hugo Boss uniform with a swastika wrapped around one of your biceps. Just becauseÂ you’re herding minorities onto trains doesn’t mean you aren’t committed to social justice and LGBT+ equality!

There’s an obvious solution, which echoes the advice many Tory people like to offer LGBT+ people who talk about the much more serious and sustained abuse they experience.

Have you tried, you know, not being a Tory?