It didn’t take long for the newly created LGB Alliance’s mask to slip. As if its supporters weren’t bad enough â€“ it’s being promoted by the likes of racist far-right troll Katie Hopkins and what appears to be the entire US alt-right on social media, and the list of people it follows on social media could easily be a guide to “trolls you should block on Twitter” â€“ someone who claims to be one of its founding members is connected to the US organisation The Heritage Foundation.

On Facebook, Gary Powell posted that “I was at the first pre-launch meeting” of the LGB Alliance to help develop its strategy. He’s been very vocal about his connection to the group and uses #LGBAlliance in his social media profile.

Here’s what Gary did in his holidays. 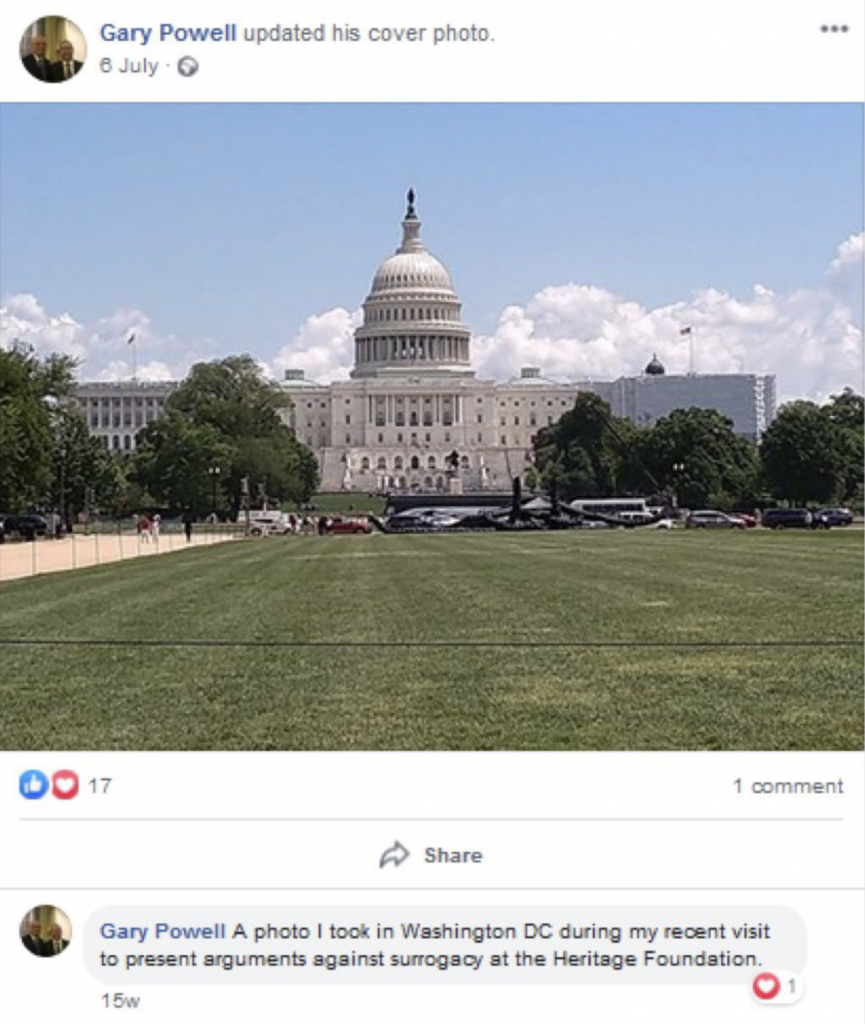 He’s not the only problematic person supporting the LGB Alliance, which has already set up the inevitable crowdfunder to process conveniently anonymous donations so we don’t get to see who they are.

Some of its staunchest supporters have previously gone on record to say they don’t trust bisexual people who – wait for it – are “erasing women”, or they have histories of posting anti-gay stuff online, which makes their support for a supposed LGB organisation look rather suspect. The LGB Alliance itself has been accused of posting anti-bisexual stuff online too, which isn’t a great look for an organisation that’s supposed to be full of bisexual people. Their spokesperson’s response? Â “Sorry! I”m (theoretically) bi myself.”

Theoretically bi. Maybe all those straight guys posting so enthusiastically about how if you don’t support the LGB Alliance against trans perverts you’re a queer paedophile (yes, people really are saying that) are doing so because they’re theoretically LGB. They’re not LGB, but they could be, if they wanted to be, and if they didn’t hate LGB people so much.

Expecting the LGB Alliance to post sensible things online is probably me being generous. Yesterday it suggested that the solution to transphobic violence was to “explain that you are trans long before you are in a vulnerable position”. That way “there will be no misunderstandings, and no dangerous situations”, which I’m sure is news to the people sexually and/or violently assaulted and even murdered by people who specifically sought them out because they were transgender. Remember, girls. If a man assaults you, it’s probably your fault.

Let’s give the group the benefit of the doubt: you can’t necessarily choose your supporters (although the clown cavalcade of bigots it’s connected to on Twitter does suggest it’s done just that). But to have a Heritage Foundation supporter in your inner circle is careless to say the least.

Powell, a Conservative councillor, writes for Public Discourse. Public Discourse is the journal of the Witherspoon Institute, one of the leading Christian Right organisations opposing gay marriage, surrogacy and women’s reproductive rights. Powell knows this, because until he took his Twitter account private last night he linked to the Witherspoon Institute from his Twitter profile. He’s clearly proud of the connection.

One of the Witherspoon Institute’s most famous creations is the Regnerus Study, a study of LGBT parents that was used repeatedly in court to argue against equal marriage for gay and lesbian people on the grounds that it is harmful to children. It’s a favourite of violent Russian anti-LGBT groups and a core plank of the movement to stop LGBT+ people being allowed to adopt.

As you’ve probably guessed, the study was bunk. The scientific community called it “a disgrace”. It was financed by anti-LGBT organisations, it was peer-reviewed by the people who did the research, and it was motivated not by a desire to find the truth but to manufacture ammunition to be used against LGBT people. It was ideologically driven, methodologically flawed and did not meet the most basic standards of academic research.

I’ve written before about the links between the US Christian Right and anti-trans activism in the UK, and how it’s part of a wider battle against women’s rights and LGBT equality. The Witherspoon Institute is one of many US organisations that’s pivoted from demonising gay men to demonising trans people with the same arguments about social decay, harm to children and so on. But the core goal is the same: legal protection for people who want to discriminate against, and refuse to provide healthcare for, LGBT+ people and women who need or have had abortions.

The methods used to attack trans women, to attack LGBT+ equality and inclusive education and to attack women’s reproductive rights are almost identical, because they come from the same people. Science denial and the creation and promulgation of pseudoscience. Dark money. The creation of fake grassroots groups and the influencing of real ones. Alliances with the far right.

Between them, these groups have backed â€˜armiesâ€™ of ultra-conservative lawyers and political activists, as well as â€˜family valuesâ€™ campaigns against LGBT rights, sex education and abortion â€“ and a number appear to have increasing links with Europeâ€™s far right.

They are spending money on a scale â€œnot previously imaginedâ€, according to lawmakers and human rights advocates

Here’s Sian Norris on the rise of US-funded anti-abortion groups in the UK.

The anti-abortion movement is also not in a silo. Its rhetoric often goes hand-in-hand with far-right groups. For example, the founder of the UK Life League, Jim Dowson, is also involved with the far-right political group, Britain First. Articles published in their bi-annual Rescue magazine in 2018 blame abortion for a low birth rate in the â€œindigenousâ€ population and describe a future where â€œthe empty cradles, playgrounds and school chairs where our own children should be are occupied by aliensâ€ unless abortion is made illegal.

…Beyond graphic and aggressive imagery, there is another US-imported tactic being employed by the anti-choice movement in the UK: the sharing of false medical information in order to undermine abortion law.

In a sane world, those are the alliances the press would be reporting on.

Many anti-trans activists are close to the far right too, which is why Katie Hopkins’ and the alt-right’s support for the LGB Alliance isn’t so surprising: some of the highest-profile UK anti-trans activists are antisemitic, racist and religiously conservative. They too are connected to the Heritage Foundation and other Christian Right organisations.

The Christian Right thinks that people are stupid. The people who are happily linking arms with them suggest they may have a point.