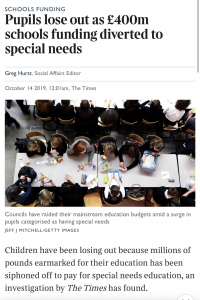 Guess which newspaper is making a false distinction between children with special needs and school pupils, and suggesting that the former are harming the latter? Here’s a clue: it rhymes with “fuelling hate crimes”.

We’ve been here before: in June, the Times wrote an awful article implying that care experienced kids were going to damage other kids’ education, making a false distinction between care experienced children and “bright children”.

Here, the people who are forcing presumably “bright” children to “lose out” are other children whose additional support needs are “seen by some parents as a ‘golden ticket'”.

It’s the worst possible spin on a fairly simple story: the government isn’t backing up reforms with money.

Councils have a statutory responsibility in England to fund special needs support, and that mandatory support has not been accompanied by adequate funding to pay for it. So councils are using their existing budgets in an attempt to provide care that the government mandates but refuses to pay for.

In any sane worldview the headline would be damning the government. But no, the enemy here is kids with learning difficulties.

As the journalist Frances Ryan posted:

This is such irresponsible framing from The Times. It parrots prejudice that disabled children are a drain, a high cost harming the education of â€˜normalâ€™ pupils.

This is happening far too often to be the result of genuine mistakes: these articles aren’t written in a vacuum and posted without anybody seeing them. There is something very wrong at the heart of the organisation, which repeatedly fails to meet even the most basic journalistic standards and which seems to take particular relish in scaring its readers about minorities. But even by its standards, going after children is a new low.