One of the good ones 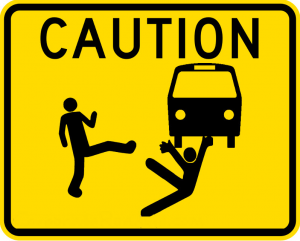 Yesterday, Home Secretary Priti Patel threw immigrants under the bus. With obvious delight, she vowed to “end the free movement of people once and for all”; in a deeply sinister dog-whistle she added: “this daughter of immigrants needs no lectures from the North London, metropolitan, liberal elite.”

The phrase “North London metropolitan elite” (also expressed as “North London liberal elite”) is a common far-right dog-whistle, because North London is where many of the Jewish community live.

There are two possible explanations for a senior politician using a well-known dog whistle in a speech. One, they knew exactly what they were doing and used it deliberately, in which case they’re wicked. Or two, they’ve heard others use it and didn’t realise it’s a favourite of anti-semites, in which case they’re incredibly thick.

What Patel is effectively saying is simple. I’m not like those people. I’m one of the good ones.

The ethos of the Racial Gatekeeper = my policies against [x] cannot be regressive, because I myself am of [x]. To escape my policies, [x] must be exceptional, like me.

…The problem with Priti Patelâ€™s dog-whistle is that those who hear it will never love her as much as she wants them to.

Such gatekeepers can be found in all kinds of minority groups.

There are some gay men who speak with the evangelical right against gay men; trans women who ally themselves with anti-trans bigots; people of colour who get into bed with openly racist political parties.

“We’re not like those people,” they say to the people they try to ingratiate themselves with. “We’re the good ones.”

And to prove it, they throw their communities under the bus.

Priti Patel cheerleading for the end of freedom of movement, oblivious to Sajid Javid being thrown under the bus as soon as Trump came to the UK. When fascism enters the room, immigrants get swept under the carpet.

Priti Patel, Sajid Javid, Candace Owens and others are performing the role of â€œracial gatekeepersâ€. They validate far-right political positions, thinking that being non-white makes them immune from critique. Theyâ€™re bouncers for nightclubs to which theyâ€™ll never be admitted.

If they weren’t so dangerous I’d have some sympathy, because I think I understand part of the mindset.

You don’t want to be defined by your identity, whether that’s your race or your gender identity or your romantic orientation. You want to be seen as a success, and a success in your own right. You are not your identity.

And how better to prove that than by helping others pick on people just like you?

If that sounds rather playground, well… that’s because it is. And so is the inevitable result, which is that the person who allies themselves with the bullies is hated by by both sides.

People who act as racial (or gay, or trans, or…) gatekeepers are often loathed by the communities they come from and loathed by the people they so desperately want to impress. I won’t name names here but I can think of multiple individuals whose personality is rather like that of a beaten dog that returns to be kicked again and again and again.

The abuse appears to do something strange. It appears to make the people more extreme. The abuse from the community they’re betraying convinces them that they’re in the right, that they’re heroic truth speakers; the abuse they get from their so-called allies makes them more extreme because they convince themselves that it’s really aimed at those people, not the gatekeeper, and if they just tried a bit harder everybody would see that they’re not like those people. They’re one of the good ones.

I’ve experienced it myself: when I first came out a few years ago I was keen to distance myself from those trans people. You know. The weirdos. What I didn’t realise at the time, and what I’m deeply sorry for not understanding at the time, was that the weirdos didn’t really exist. A handful of extreme and completely unrepresentative examples were being used to demonise an entire group, and I’d fallen for it. When I realised this and started to question the stories I was being told, the storytellers turned on me too. I was no longer one of the good ones, no longer a useful idiot to legitimise what I now understand was bigotry (incidentally, that’s one of the reasons I’m so vocal now: I’m trying to compensate for any damage my naivety might have caused).

The problem with trying to be one of the good ones is that your identity is still there. You’re still one of those people.

You’re not there because you’re special.

You’re there because you’re useful.

You don’t have that platform because you’re a skilled politician, an accomplished orator or a great thinker.

You’re there becauseÂ your presence enables others to hurt people like you without feeling bad about themselves for doing it.

How can it be racist if a black man says it’s a good thing? How can we be accused of being anti-LGBT if a gay guy’s in our party? How can the Prime Minister be misogynist if a woman defends him?

The key thing to remember – having known people with Patel’s worldview – is that being a Racial Gatekeeper is very lonely. It creates a genuine feeling that you are a member of a heroic and hounded minority, even though it is a membership of a cruel club you chose with relish.

The only way to evade the loneliness is to double down at every turn, to adopt views so extreme that that they startle even those you are trying to impress. You say the nastiest things you can with the biggest smile. Drawing fuel from adversity is all you have.

If you spend years doing that – surrounded by people who tell you that you’re better than those [x], since unlike them you worked hard, raised yourself up – you begin to believe your myth, to buy into your sense of destiny. But the people who surround you are still afraid of you.

And the people from your community will pay the price for your ego.