Not so reasonable now

Jezebel has posted a very comprehensive analysis of one of the LGBT+ human rights cases in front of the US Supreme Court.

Tellingly, a whoâ€™s who of anti-trans bigots have signed on in support of Rost, from the Heritage Foundationâ€™s Ryan T. Anderson to the Womenâ€™s Liberation Front, or WoLF, all of whom are attempting to make the same argument: that trans women are not women and that giving trans women civil rights protections would harm other women. (For the members of WoLF, the fact that a ruling against Stephens would possibly reify gender stereotypes in the workplace apparently matters less than ensuring trans women have fewer rights.)

That who’s who also includes some of the most prominent anti-trans activists from the UK. For example Linda Bellos, a regular contributor to UK radio, TV and newspaper discussions about trans issues, travelled to the US to address the primarily right-wing and straight crowd of anti-LGBT+ protesters outside the Supreme Court. Messages of support from other high-profile UK activists were read out to the crowd.

Bear in mind that these people have said repeatedly that they are only speaking out about trans issues because they have “reasonable concerns” about possible unintended consequences of reforming the UK gender recognition system. Nothing more, nothing less. They are absolutely not motivated by a hatred of trans women, and to suggest so is a vicious slur. 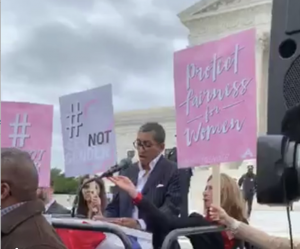 And yet here they are, proudly standing in front of supporters of, and in front of banners bearing the logo of and paid for by, the anti-abortion, anti-lesbian, anti-gay, anti-trans, anti-diversity Alliance Defending Freedom.

The links between British anti-trans activism and the US religious right are well documented, but they’re generally concealed on the grounds that holding hands with anti-women, anti-LGBT+ hate groups isn’t a very feminist thing to do even if you hate trans people as much as they do. And the ADF really is a hate group. It was classified as suchÂ by the SPLC in the US for its efforts to criminalise homosexuality and enable businesses to discriminate against LGBT+ people. It advises anti-LGBT+ organisations in other countries how best to keep anti-gay laws on the statute books, and it fought vigorously against the US decriminalisation of gay sex.

The global wing of the Alliance Defending Freedom (ADF) has a multi-million dollar budget but does not disclose who its funders are. It opened an office in London two years ago and is now spending hundreds of thousands in the UK.

…It was recently denied â€˜participatory statusâ€™ at the Council of Europe because of its opposition to a convention on preventing and combating violence against women.

…ADF International has worked with the British Christian right for years. It previously collaborated with its â€œallied organisationâ€ the Christian Institute, for example, to support a London registrar who refused to officiate for same-sex civil partnerships