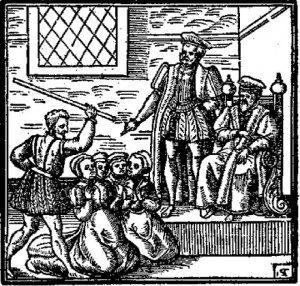 There’s a fascinating piece in the New York Times by Whitney Curry Wimbish, an American writer living in Scotland. It’s about our witch trials, the ones we didn’t get taught about in school.

…the authorities targeted more than 3,000 people throughout the country, from the largest cities to the most remote and sparsely populated islands.

The accused were teachers, nurses, domestic workers, tailors, farmers, ministers, coal miners, mostly female but also male, indicted by men and women alike. They were imprisoned, tortured with brutal creativity, and in many cases, executed. The intensity of the panic rose and fell more than once over these 200 years and, according to scholars, coincided with personal grievances and the stateâ€™s insistence that all citizens actively promote Godâ€™s will.

In Scotland, as in the US, the victims were innocent. The cause of the hysteria has been attributed to lots of things â€“ economic distress, changing attitudes to women, the power of the local Kirks and many other things â€“ and was probably a mix of many different factors. Some of it was undoubtedly cynical hate mongering by the ruling classes, as Wikipedia describes:

In the view of Thomas Lolis, James I’s goal was to divert suspicion away from male homosociality among the elite, and focus fear on female communities and large gatherings of women. He thought they threatened his political power so he laid the foundation for witchcraft and occultism policies, especially in Scotland. The point was that a widespread belief in the conspiracy of witches and a witches’ Sabbath with the devil deprived women of political influence.

But a big part of it was technology.

Across Europe, the hatred that led to witch trials was fuelled by the cutting edge technology of the time: the printing press. It did then what social media and mass media does today.

One book in particular, Melleus maleficarum or The Witchâ€™s Hammer, has been widely credited with fuelling the European witchcraft panic. As the excellent Text Technologies blog explains:

Europe was in the midst of great social change at this time. The Reformation brought about a challenge to the moral authority of the church. Scientific and technological innovations where changing the way people lived, thought, and worked. People were moving into urban areas, which changed the traditional feudal order and hierarchy. All this change led to social instability and confusion. In a state of upheaval people look for moral guidance and authority to explain what is happening and what can be done about it. Melleus maleficarum offered this moral guidance and authority. Because of its contents, structure and printed form Melleus maleficarum provided a powerful new ideology that people were seeking.

…Although the printing press was not the cause of the European witch craze of the 1400 through 1700â€™s, it was a technology that allowed for the mass production of material that was instrumental in the dissemination of information that fed the witch-hunt craze… Without the printed texts, the witch-hunts would never have been as devastating as they were.

The Women’s Museum of California:

The church and those in power made expert use of the printing press, weaponizing it to disseminate propaganda that declared magic and witchcraft inherently evil. With the intent of identifying and punishing women who did not submit to their will, then the church used reproducible media to associate independent women with witchcraft, regardless of their actual experience with magic.

…From their very inception, witch hunts were organized, initiated, financed, and executed by the church and state in an attempt to control women and much of the imagery was disseminated through the mass production made possible through the printing press.

It wasn’t just women. The anti-semitic blood libel, which has led to countless Jewish deaths, was spread by the printing press (and some of its most notorious titles have found new life fuelling new hatred on social media). The printing press reassured American Puritans that black slaves were supposed to be slaves because of the word of God. And so sadly, viciously, murderously on.

Whenever people in power â€“ whether those people are a race, a religion or a royal family â€“ have wanted to crush people they see as enemies, they’ve used technology to allege and incite hatred of supposed deviancy. There’s very little difference between the lurid allegations made against so-called witches by the churches of the day and the lurid allegations made against black, gay, Muslim or trans people by more modern but no less hateful people today. They’re in league with the devil. Burn the witches.

Back to the NYT:

With the passage of the centuries weâ€™ve come to understand that 100 percent of people accused of witchcraft were innocent. We recognize the nonsensical nature of a crime committed by being something, not doing something. But we still persecute people simply for who they are â€” or who we think they are.

We know where the witchcraft panic came from, how it was spread and who benefited from it. Perhaps we need to spend more time studying and learning from the reasons why it stopped.