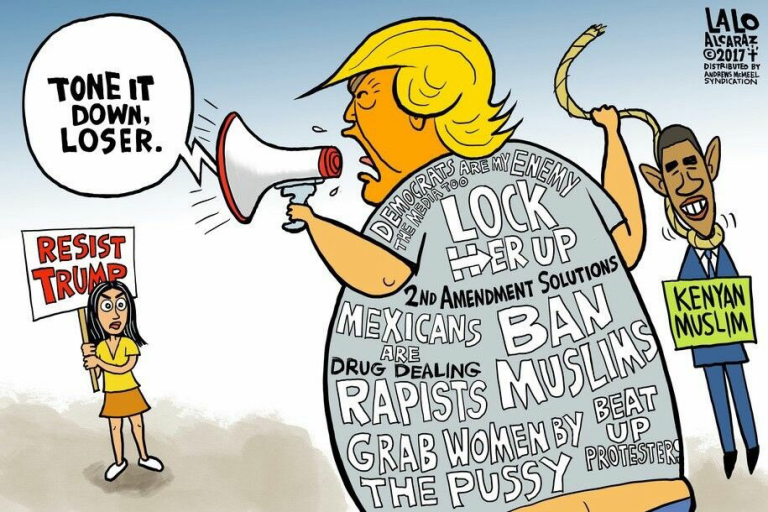 One of my friends wasn’t born in the UK. Despite having lived here for a very long time, paying lots of money in tax and marrying the love of her life, a lifelong UK citizen, she does not currently know whether she will be allowed to stay in the UK post-Brexit. As you can imagine, this is very frightening and stressful for her and her husband; despite being one of the kindest, nicest people around she occasionally gets pissed off with people on the internet who, against her express wishes, try to argue with her by sending her links to publications that scaremonger about migrants every day.

For this, she is told that she needs to lighten up, give people a break and be more kind.

As she points out, the publications in question are not kind to, and do not give a break to, people like her.

What’s happening here is called tone policing. Tone policing is an ad hominem attack where you attack the emotion behind a message rather than the content of the message itself.

The underlying and fallacious assumption behind tone policing is that there are equal sides to a topic and that all participants have equal skin in the game. But the reality is that there are often topics where there are not equal sides, and where the participants do not have equal skin in the game, and where anger is a perfectly understandable and legitimate response to the malicious horseshit that the other side is throwing around.

Imagine you post a short message on your personal social media account to say that the person you love most in the world is seriously ill in hospital. Now imagine that I respond with a message or a series of messages containing links to publications that “prove” that their illness is either completely invented, the result of their own bad life choices or part of an international conspiracy. One of the articles demonises people like your loved one with a series of vicious slurs before concluding that they should be denied NHS treatment altogether.

Would you (a) respond with kindness and wit, or (b) tell me to take a flying fuck at the moon?

If you went for (b), I’d then respond: why are you being so aggressive? Why can’t you be nice to people? You need to lighten up!

The reason you’d be angry, of course, is because I’m demanding you read inflammatory, incorrect bullshit about something that affects you but not me, and demanding you respond according to standards I’ve decided you have to conform to, whether you want to or not.

Tone policing is particularly prevalent in discussions about people’s rights, where there are not necessarily equal sides where people have equal investment in the issue being discussed. You’ll often find that one side will not be affected at all by the issues under discussion while for the other, it’s a matter of life and death.

For example, people arguing to restrict people’s rights, whether those rights are for gay people, women or EU nationals who’ve made their lives here, can usually stay perfectly calm if these issues don’t affect them in anything other than the most abstract sense.

Some of those people are ignorant. And some are just terrible people. In the latter group you’ll find people tone policing minorities while getting apoplectic because a newsreader hasn’t been wearing a remembrance poppy since September, yelling themselves puce about pop singers’ pronouns, or vowing violence because Gregg’s sells pastry products to vegans.

And more than anything, they get angry at the ungrateful bastards who have the temerity not just to say that things aren’t perfect in this, the best of all possible countries, but to use the word “fuck” when they say it.

This is not a new concept.Â Martin Luther King wrote about it from Birmingham Jail, saying that people of colour shouldn’t just fear the Klan but also:

Battling injustice isn’t nice; it isn’t polite; it isn’t kind. As Dr King put it, injustice “can never be cured so long as it is covered up… injustice must be exposed, with all the tension its exposure creates, to the light of human conscience and the air of national opinion before it can be cured.”

Tone policing is an attempt to keep injustice covered up, which is why those with power or privilege deploy it so frequently.

Tone policing protects the powerful, not the powerless; it reinforces privilege by refusing to listen to those who question it. It silences people: if they are not sufficiently angry, nobody listens; but the anger that finally gets them heard is then used to discount everything they say. They’re unreasonable, hysterical, a bitch, uppity, an activist, an angry X. Their views, their experiences, their lives are of no consequence.

That’s not to say that anybody’s views should be presented without criticism or challenge. But that’s not what I’m talking about here.

I’m talking about people who have nothing to fear in their lives telling genuinely frightened people to lighten up.

About people with extensive privilege telling marginalised groups to be kinder to their tormenters.

About people who are more upset by someone calling a politician or columnist a cunt than the policies that kill people and wreck lives or the rhetoric that gets people beaten to a pulp in the street.

If people’s righteous anger makes you uncomfortable, you should be grateful. Uncomfortable means unafraid: unafraid of being thrown out of the country you live in; unafraid of your hard-won human rights being sacrificed to satisfy extremists; unafraid for your safety, for your family or for your future.

Rather than policing the expression of people who have every reason to be angry, try being grateful that you aren’t having to go through what they’re going through.

And then listen to what they’re trying to tell you.