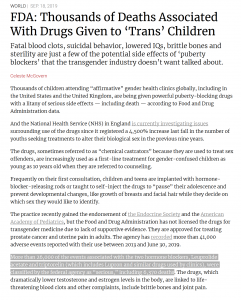 The National Catholic Register has published a terrifying article implying that there have been thousands of deaths from puberty blocking.

Is it bullshit? Of course it is. Even if you didn’t know that the National Catholic Register is a right-wing religious rag that really hates trans people, the use of the phrase “transgender industry” in the copy is a pretty big clue that we’re not dealing with good faith here.

The Implausible Girl has looked at the statistics. How many deaths of gender dysphoric people have been linked to the drugs over ten years?

How many serious adverse reactions among gender dysphoric people over ten years?

How much bullshit is in the article?

They conveniently ‘forgot’ to mention that the drug is used for LOTS of conditions. It has been prescribed to tens of millions of people over decades.

It is a very effective and safe drug that is on the WHO’s Model List of Essential Medicines.

…What they’ve done is, quite deliberately, is used rare adverse events from a drug given to many, many people for other conditions and implied that it was a deadly threat to trans children ‘because adverse events and deaths’.

You could do the same thing with acetaminophen [paracetamol].

The article has, of course, made its way to the anti-trans activists on Mumsnet with surprising speed, so it’s no doubt just a matter of time before it’s written about by Janice Turner in the Times, James Kirkup in the Spectator or the rest of the anti-trans mob. At which point it will become yet another piece of scaremongering bullshit that trans people will have to debunk again and again and again.