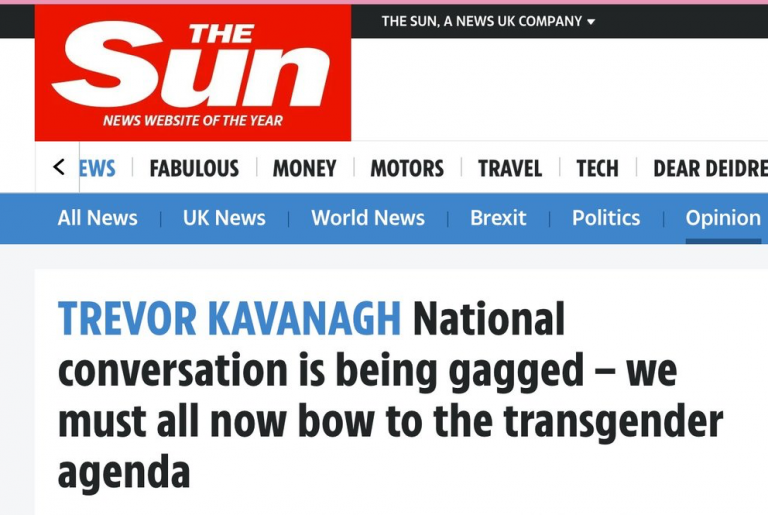 Tea Uglow did an interesting thing. They took screenshots of articles containing the word “transgender” on a few English news outlets. Over the last 12 months, there were 878 articles. That doesn’t include publications such as the New Statesman, which has been home to a lot of anti-trans voices, and to regional press such as The Scotsman, The Herald and The National, all of which frequently print a disproportionate amount of content from anti-trans voices. It also doesn’t include articles that use “trans” instead of “transgender”, of which there are many more.

We hope this serves to understand what 3 â€˜articlesâ€™ a day about your community feels like.
Obviously, if we tried to track all â€™transâ€™ articles online we would need someone clever.

We stopped when results felt irrelevant. i.e. Transgender is mentioned in many hundreds of â€˜newsâ€™ or opinion pieces without relevance to the news item in question. (Hereâ€™s looking at you Sunday Times)

No, itâ€™s not scientific. Yes, the methodology can be questioned.
Knock yourself out / Do better / Or.. perhaps, just leave us alone.

It may be a relatively small chunk of the anti-trans coverage we’ve seen in the last two years but it’s still a thoroughly saddening read. Trans people are repeatedly painted as a faceless, sinister mob that somehow has a stranglehold on politics and the media despite there being no trans politicians, columnists or editors.

In the popular press, all trans people are activists and all anti-trans activists are not activists. People who call trans people unspeakable things and threaten violence against them are just ordinary mums and dads with reasonable concerns. People who keep getting suspended from social media for online abuse get to present themselves as innocent victims of political correctness gone mad. People who hound women who disagree with them off the internet are portrayed as noble defenders of women. People who roundly abuse trans people until someone snaps get to claim they’re the victims, not the perpetrators.

You don’t have to read all 800-plus pieces to see the patterns. Again and again articles talk about the dangers of legal reform by scaremongering about completely different legislation. Articles repeatedly lie that children are given cross-sex hormones (they aren’t) and surgery (they really, really aren’t). Straight white men dust down their anti-gay columns from the eras of section 28, the lowering of the age of consent and the equal marriage debate and do a search and replace to swap “gay” for “trans”.

There are fair and balanced articles about trans people, but not many. It’s easy to find articles trying to persuade readers that the Mermaids charity is trying to force kids to have surgery (which doesn’t happen). Good luck finding profiles of any families they’ve helped. Private GPs who treat trans people are demonised, but the crisis that forces so many trans adults to go private or to take a dangerous DIY route is rarely mentioned. It’s easy to find stories about the invented dangers of trans women in prisons but not ones about the actual violence trans people in prison experiences; or pieces about the invented dangers of minor legislative reform but none about the actual experiences of the only people who will be affected by it.

All too often the same writers trot out the same bullshit. To them it’s a game, something to chortle about to their friends on social media. They know it’s cruel, because the cruelty is the point.

It’s not a game for the people they’re defaming.

This is not about legitimate debate. This is about the full power of the press being used to target, defame and demonise a tiny, vulnerable minority of people. We’re not a mob. We’re not a lobby. We’re people just like you. And right now, we’re very, very frightened.