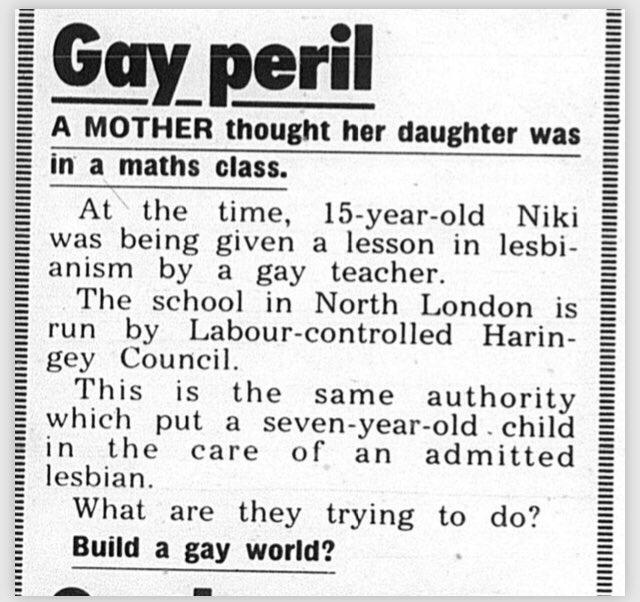 If you think that sounds familiar, have a read of Terry Sanderson’s Media Watch column from that month, May 1992. Sanderson spent a quarter of a century battling against bigotry in UK newspapers, and sadly the publications and the writers don’t seem to have changed much.

There was Julie Burchill:

Julie Burchill is rapidly becoming the most prominent commentator on gay issues in the straight press… the message comes over loud and clear that Julie has reached the conclusion that gay men are the ultimate oppressors of women. This, I think, is her problem. It is because she imagines all gay men hate women (or, worse still, patronise them) that she has got this bee in her bonnet about Aids.

Burchill would later turn her ire towards trans women, who she now appears to believe are the ultimate oppressors of women.

There were single-issue pressure groups gaining disproportionate press coverage for their intolerant views and allegations of sinister lobbies endangering children:

During the election campaign The CFC (prop. Stephen Green) was issuing press releases like confetti.

Nearly all of them concerned homosexuality. At the CFCâ€™s prompting, The Sun reported (26 Mar): â€œSocial workers are telling ten-year-old kids in care that gay sex is part of growing up.â€

…The Daily Express (23 Mar) saying: â€œLabour and Liberal Democrat policies on gay rights would put children at risk from homosexuals.â€ Mr Green â€œcondemnedâ€ the politicians concerned saying that any changes in the law would â€œendanger childrenâ€: What The Daily Express failed to extract from the CFCâ€™s press release was revealed by The Independent (3 Apr). The CFC had actually said that Neil Kinnock and David Steel have supported â€œthe child sex movementâ€ (which is the CFCâ€™s term for the gay movement).

There was dubious crowdfunding for publications advocating dangerous conversion therapy:

Mr Green revealed to the Independent that â€œheâ€™s nearly raised the Â£11,000 he needs to publish a book on homosexuals provisionally entitled Emotional Orphans.â€ The book will explain â€œhow homosexuals may achieve heterosexualityâ€ which he says is a â€œpainfully difficult processâ€.

There were newspapers deliberately equating being LGBT+ with being a criminal:

â€œOutrage as boy is handed over to lesbian criminalâ€ said The Daily Mail (I Apr) with The Sun announcing: â€œLefties put boy in care of lesbian jailbirdâ€. Note how the words â€œlesbianâ€ and â€œcriminalâ€ become interchangeable in these circumstances: which is the more horrid prospect for the small boy to cope with?

And there was the “they’re coming for your children” moral panic as illustrated in the “gay peril” cutting at the top of this post.

Awful, isn’t it? Two years later the Sunday Times, which railed against the so-called homosexual lobby, argued that HIV wasn’t the cause of AIDS and that saying so was the “HIV bandwagon” pushed by “the legions of the politically correct”. Andrew Neil, the editor at the time, believed that the link between HIV and AIDS was a conspiracy theory and that discussion of it was a “public misinformation campaign”.

Also in 1994, the newspapers fired their final salvos in their crusade against moves towards equalising the age of consent for straight and gay people (the age for straight people was 16 but in 1994 it was decreased from 21 to 18 for gay people. Equality wouldn’t happen until the following decade).

Naturally the â€œwe must protect the childrenâ€ argument was trotted out repeatedly. This is a sensitive area, and consequently was played for all it was worth by â€œfamilyâ€ groups and other politically and religiously motivated opponents of change.

…The Daily Express, meanwhile, distorted the British Medical Associationâ€™s support for a lowering of the age of consent to 16 by headlining it: â€œTeenage Aids scourgeâ€ (January 14th).

And then there was the Telegraph.

The article was illustrated by a cartoon that Goebbels wouldnâ€™t have been ashamed of. It showed lock gates imprinted with the word â€œconsentâ€ being opened ready to engulf the unsuspecting people below.

Ms Burrows, a woman of extraordinary fanaticism, alarmingly claims in her article that â€œa homosexual lifestyle reduces life expectancy from 75 to 42â€. Where on earth does she get such a statistic? Why, from the Family Research Institute of Washington.

The Family Research Institute is described by the Southern Poverty Law Centre, the US organisation that tracks neo-Nazis, race hate organisations and other lovely people, as an anti-LGBT hate group.

This latest gem about the reduction of life expectancy has been repeated at least twice over the radio by members of these â€œfamilyâ€ groups, and in neither instance was it challenged.

Then, like now, bigots were given a platform to spout vicious bullshit about marginalised people without fear of challenge; then, like now, national newspapers incited fear and hatred of LGBT+ people; then, like now, the regulators did nothing and the victims’ pockets weren’t deep enough to fight the newspapers’ lawyers.

A lot can change in 25 years, but apparently not in the UK mass media.