After the fire, the flats 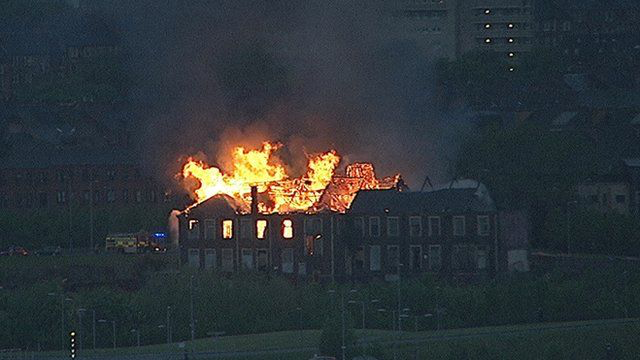 There’s a bleak joke here in Glasgow about old buildings: they have a strange tendency to set themselves on fire.

I live just across the road from one such example, the historic Scotway House building (pictured). It was a drawing office for the shipyards and when developers wanted to knock it down to make room for student flats, they were told they couldn’t. Shortly afterwards it burned down. The first fire didn’t destroy it completely, so it was burned down again; police say both fires were set deliberately.

Today, there are flats on the site where it once stood. An imitation of the former structure is now “ultra-modern, high tech student accommodation”.

As the excellent A Thousand Flowers blog noted in 2016:

When news of the fire broke after 9pm on Friday, many were quick to comment that itâ€™s not the first case of a prominent listed building in the city, on a site primed for development, going up in flames. â€œSomewhere in the city, developers are popping the champagne corks, and rubbing their hands with gleeâ€ commented the popular Lost Glasgowpage on Facebook.

The Scotway House fire was predicted in the not entirely tongue in cheek, years-long “‘not in any way suspicious’ buildings gutted by fire thread” on the Skyscraper City site in 2015.

There’s a huge problem in Glasgow going back many years where beautiful buildings are being lost. The most high-profile example is of course the Glasgow School of Art, which has suffered not one but two catastrophic and apparently completely avoidable fires.

Glasgow doesn’t do a great job of protecting its architectural heritage, one of its greatest strengths: we tell visitors to look up because there’s so much beautiful detail in our old buildings. But all too often we lose them to mismanagement or neglect.Â For example in Union Street, right across from the busy Central Station, the Egyptian Halls â€“ considered by many to be Alexander “Greek” Thomson’s masterpiece â€“ are rotting away. The cost of bringing the Halls back to their former glory are skyrocketing.

Here’s what they looked like before the scaffolding blocked them from view.

And when there isn’t neglect, there’s fire.

The second art school fire in 2018 did serious damage to another Glasgow wonder, the former ABC cinema. The ABC started life in the 19th century as the Diorama, became the Panorama, and changed again to become Hubner’s Ice Skating Palace in the late 1800s. It then became the Hippodrome, and then Hengler’s Circus. In 1929 it became a dancehall again. It was a cinema for a couple of decades and became a music venue in 2002.

And now, it looks like it’s going to become flats.

I love the ABC. To my mind it was Glasgow’s finest music venue, and it’s of great architectural interest too. It’s been closed since 2018, but it’s not beyond repair. Nevertheless, a developer wants to demolish it completely to construct more student flats.

A Thousand Flowers, once again, is on the case:

…A dispute over the structural integrity of the ABC building is central to what happens next. The developer maintains that the building is beyond repair, unsafe, and needs to be flattened. Glasgow City Councilâ€™s Building Control â€“ who have permitted the reopening of the street directly below the boarded up facade â€“ are, however, satisfied that the building is secure for the moment. Historic Envronment Scotland have stated that while the roof has been gutted, the main areas of architectural and historic interest â€“ namely the front facade, entrace foyer, and auditorium walls, are largely intact and capable of repair.

The developer says it wants to bring the ABC back as a world-class music venue but hasn’t submitted any plans or attempted to preserve any of the historic building. As Historic Scotland, hardly a raggle-taggle bunch of anti-capitalist activists, put it:Â â€œIt is our view that the applicant has not made an adequate effort to retain and preserve this C-listed building (or any part of it), and has therefore not met the tests for demolitionâ€.

A decision will now be made by council planners. If the owners are granted permission to flatten the ABC, how long will it be before the student flat proposals for the neighbouring block emerge out of the ashes?

It’s funny how things in Glasgow tend to follow the same pattern. A developer wants to build a bunch of student flats; a beautiful old building means they can’t; the beautiful old building goes on fire; the proposals for the flats come back again. I’m not suggesting that the developers of any properties mentioned here are in any way implicated in the destruction of these buildings, but then again I’m not going to suggest that any developer gives a shit about saving old buildings. History, art and architecture may gladden the heart, but they don’t show up on developers’ balance sheets.

Within a few hours of posting this, I saw the news of a major fire in a listed building on Scotland Street. The building and outbuildings stand in the way of a new development of flats.

I agree in general about “mystery fires” but not sure about Scotland Street – they’ve already got permissions and have drawn up the plans and the architect has a track record of working with old buildings – The Lighthouse, Kelvin Hall, Glasgow School of Art, Kelvingrove Bandstand…

They’re very high profile so they will have cost a fortune. I can’t imagine that at this point the savings of having removed the listed buildings would outweigh the costs of that firm doing new plans. Not in that area of town. I don’t think they were intending on keeping any more than the facades either.

If you’ve ever walked past the Howden’s factory it’s in a chronic state of disrepair and is held up by load-bearing graffiti.