Not going for gold 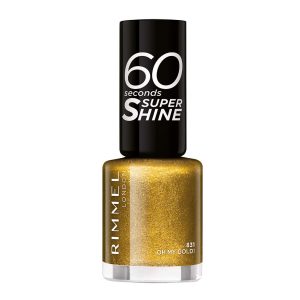 This is a bottle of Rimmel’s Oh My Gold nail polish, which I’m currently sporting. My five-year-old son likes it too, because nail polish is fun and fun is important. So when he asked for some on his own nails last night I was happy to oblige.

This morning, he asked me to take it off again because he’s going to a sports camp where “the big boys will notice and say ‘what are you wearing nail polish for? That’s for girls!’ and pick on me.” So we got the nail polish remover and scrubbed every last bit off again.

Five years old and he already knows the rules, and that he’ll be punished for breaking them.

It makes me sad, as it did when my daughter was told aged four that history and dinosaurs are not for girls, and as it did a year later when she was told that girls couldn’t play with dragons because unicorns, not dragons, are for girls. We’re policing the gender of imaginary creatures now, it seems.

These attitudes are learnt, of course. They’re passed down from other children, and from parents. So at an age when children should be expressing themselves more, experiencing more, exploring more, learning more, we’re already trying to put limits on all of those things.

In a world of infinite colours, we’re telling them to choose just one.