The Guardian, and pretty much every other newspaper, reports today that acceptance of LGBT+ people is in decline. As The Guardian put it in a social media headline:

That’s not what the social attitudes survey, which the headline refers to, says at all. It reports that in the last three years, the percentage of the 3,000 people polled who say there’s “nothing wrong at all” with same-sex relationships has been 66%, 68% and 64%.

As Matt Singh, pollster, election analyst and person who is Very Good With Numbers put it on Twitter:

Silly, sensationalist, clickbait. The measured proportion saying same-sex relations “not wrong at all” fell two points from the last BSA, well within the MoE (not acknowledged until para 7) and might simply be because 2016-17 saw a relatively big increase

…As recently as 2012, this was a minority view. It is now the view of two-thirds of GB adults. Please don’t make LGB communities feel their acceptance is under threat because you find statistical caveats inconvenient. 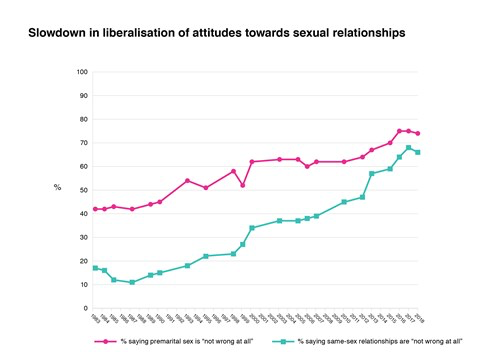 It’s not very clear, I know: the pink line is the percentage saying pre-marital sex isn’t wrong; the green one, same-sex relationships. The little downwards bit at the end is the difference in polls in just one year in a poll of 3,000 people.

You’ll see there was a much bigger dip in approval of pre-marital sex in 1996 and another a few years later; nevertheless, the trend continued upwards. Acceptance of same-sex relationships may well be slowing down, but it’s unlikely that it’s peaked and you can’t infer decline from a difference that’s well within your poll’s margin of error. And yet even The Guardian is going for the most click-baity interpretation of the numbers, something that’ll delight the bigots.

Acceptance isn’t going backwards. But journalism appears to be.