This week, Scottish universities unveiled an important new initiative: people who’ve been in the care system will be guaranteed the offer of a university place if they meet new minimum entry requirements. It should double the number of care-experienced students to around 600 people.

It’s designed to address some of the issues that don’t affect those of us who haven’t been in the care system. As The BBC puts it:

For example, their education may have been disrupted as they moved between carers.

It’s clearly a positive, progressive move that’ll benefit some disadvantaged people â€“ which is how most of the press has reported it. Most of the press apart from The Times.

People with straight As face losing out on a university place under a pledge to widen access for disadvantaged people.

That’s the opener. The next paragraph adds that the pupils will be “potentially displacing a better qualified candidate with a more fortunate background.” It also chooses to provide its readers with different figures: instead of telling them that the number of students from care backgrounds may increase from 300 to 600, it says that “there are 15,000 ‘looked after’ children in Scotland”.

Look at the word choice there. “Displacing”. Displacing means moving something from its proper or usual position. It’s often used to describe natural disasters forcing people to abandon their homes, and it’s a favourite of racists too. It’s a very loaded word, which should never be used lightly when talking about people.

It’s a good example of how you can twist a narrative to suit a particular agenda, in this case to make your readers frightened that horrible poor people might prevent Tarquin or Jocinda from getting that place at university. It won’t, of course, and The Times knows it. But the story The Times wants to tell its primarily white, affluent, middle class to upper class readers is that the other â€“ in this case, children from disadvantaged backgrounds â€“ are coming to take away what you have.

Possibly the worst, most telling example of this was a few weeks ago when a stowaway fell from an aeroplane in London. The man, from Kenya, died horribly. As one neighbour told the press, “there was blood all over the walls of the garden.”

The Times ran this headline. 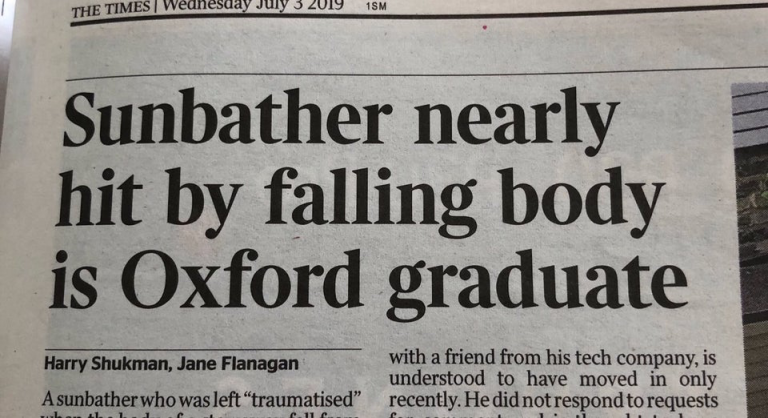 Bloody foreigners coming over here, dying in our gardens, leaving us to clean up their shattered corpses.

Once you’re aware of it, you’ll see it everywhere. Telling readers that some group of others is coming for their children is a Times (and right-wing media generally) Â staple, whether it’s Muslims, LGBT people, foreign people (especially European people or brown people), poor people or women people.

That’s because the Times is the house organ for privileged people, and what it’s serving them is “privileged distress.” Here’s Doug Muder to explain what that means.

As the culture evolves, people who benefitted from the old ways invariably see themselves as victims of change. The world used to fit them like a glove, but it no longer does. Increasingly, they find themselves in unfamiliar situations that feel unfair or even unsafe. Their concerns used to take center stage, but now they must compete with the formerly invisible concerns of others.

There’s another word for it.

Here’s activist and playwright Wayne Self.

…Supremacy is the habit of believing or acting as if your life, your love, your culture, your self has more intrinsic worth than those of people who differ from you.

…You donâ€™t have to hate people to feel innately superior to them. After all, what kind of threat are your inferiors to you? You may be annoyed by them, from time to time, or you may even like them. You can even have so much affection for them that you might call that affection love.

That’s not to say that Times readers are supremacists. Most of them, I’m sure, are decent and kind. But the thing about privilege is that you don’t notice it when you have it, so any attempt to improve equality can look like you’re being picked on, discriminated against. That’s why some people genuinely believe that cisgender, heterosexual, affluent white men face more discrimination than other minority groups. It isn’t remotely true, but to some it feels true.

Telling people that their inferiors are coming for what they have is one of the oldest, most malicious tricks in the book. But it works, and it provides an opportunity for bad actors to weaponise it. Bigots of every stripe, the far right, disaster capitalists, billionaire media moguls.

There’s a joke that I’ve seen circulate in various guises, but the basic point remains in each version.

A billionaire, a Times reader and a Polish cleaner are sitting at a table with a plate of twelve biscuits in front of them.

Slowly and deliberately, the billionaire eats eleven of the biscuits.

His mouth covered in crumbs, the billionaire turns to the Times reader.

“Watch out!” he says. “That cleaner’s going to steal your biscuit!”