You’re being lied to about hate crimes

As I mentioned yesterday, one of the most common reactions to the news of increasing hate crimes was denial: the crimes are just touchy snowflakes going to the cops about the slightest thing on the internet.

To put it mildly, that’s a complete misunderstanding of what hate crime is, and what minority groups experience.

Something cannot be a hate crime if it isn’t a crime. The “hate” bit is a qualifier: a hate crime is a crime committed because of hostility or prejudice based on disability, race, religion, transgender identity or sexual orientation.

In law, a one-off case of shouting abuse at someone because of these characteristics is a “hate incident”. It only becomes a crime if it becomes a criminal offence under legislation such as the Malicious Communications Act or the Public Order Act.

So what actually gets reported and recorded as hate crime? If only there were some kind of handy document such as the Hate Crimes England And Wales Statistical Bulletin 2017/18, published in October by the UK government. In the document it breaks down the kinds of crimes recorded. 56% were public order offences (threats of violence or intentional harassment, alarm or distress, usually involving more than one offender), Â and 33% crimes of violence.

As NotCursedE on Twitter, from whom I found this information, points out, the report helpfully details the type of crimes committed against each protected characteristic: 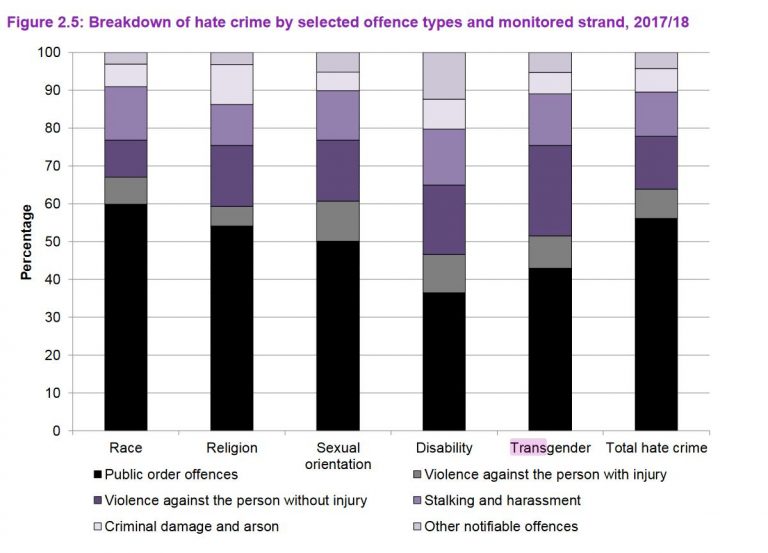 You’ll see that “deliberately offensive tweets on the internet” doesn’t appear. That’s because of the total number of hate crimes reported by trans people, online abuse and harassment only accounted for 6%.

The most depressing stats aren’t the crimes, though. They’re the results. The percentage of reported crimes resulting in a charge â€“ not necessarily a successful prosecution â€“ are incredibly low: for violent hate crimes against trans people, the charge rate is 4%; for public order offences, 4%; for criminal damage and arson, 4%. The figures are very similar for other LGBT+ people.

As with the supposed free speech martyrs of the far right, the people trying to persuade you that hate crimes just mean nasty tweets are lying to you. Even those who embark in massive, ongoing abuse of LGBT+ people on the internet remain at large, entirely free to incite hatred online, free from the real-world consequences of the hate they post.