If only there were some explanation

Today, in The Guardian: 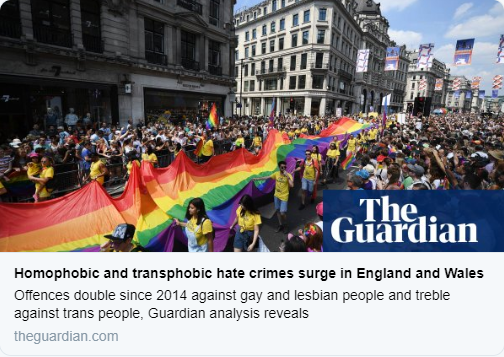 That’s the same Guardian that’s printed inflammatory drivel about trans people for months now. The same Guardian whose US staff were so outraged by its promotion of “transphobic viewpoints” that they took the unprecedented step of writing an open letter damning their UK colleagues.

Maybe their UK colleagues should read it again.

Cis womenâ€™s intolerance should not be a legitimate reason for limiting the rights of trans women. The idea that all trans women should be denied civil rights because a trans woman might someday commit a crime is the essence of bigotry and goes against feminist values.

That’s not to say The Guardian doesn’t sometimes print voices supportive of trans people. It does, albeit vanishingly rarely, in what looks rather like an attempt to deflect criticism of its overwhelmingly negative portrayal of trans people â€“ criticism of which goes back many years.

I was at a talk last night by Juliet Jacques, whose transition diaries appeared in the Guardian from 2010 to 2012. The diaries were longlisted for the Orwell Prize in 2011, but Jacques was under no illusions that the editors had any interest in reporting trans issues beyond tokenism: her attempts to describe the wider picture, both cultural and political, had to be done by stealth.

However as Jacques’ columns show, sanity does sometimes get a word in â€“ as it does in this powerful piece by “Chris”, one of the two women attacked on a London bus this week.

This attack and the ensuing media circus are par for the course in 2019. In both my native United States and here in the United Kingdom, it always has been and still is open season on the bodies of (in no specific order) people of colour, indigenous people, transgender people, disabled people, queer people, poor people, women and migrants. I have evaded much of the violence and oppression imposed on so many others by our capitalist, white supremacist, patriarchal system because of the privileges I enjoy by dint of my race, health, education, and conventional gender presentation. That has nothing to do with the merit of my character.

…The commodification and exploitation of my face came at the expense of other victims whose constant persecution apparently does not warrant similar moral outrage.