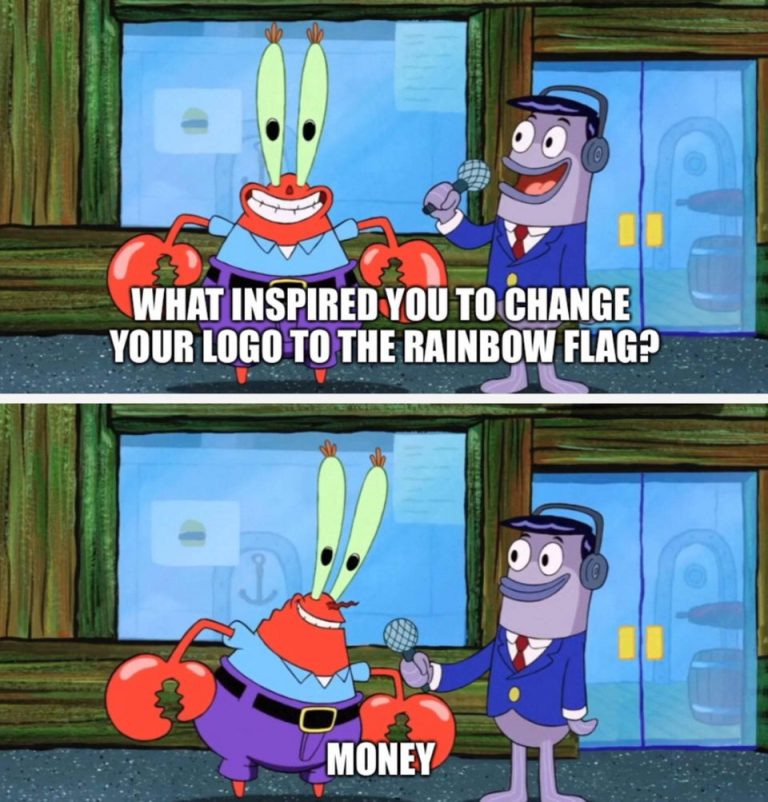 The other day, I told the most powerful man in the world to take a flying fuck at the moon. America’s criminal-in-chief had the gall to post this on Twitter:

As we celebrate LGBT Pride Month and recognize the outstanding contributions LGBT people have made to our great Nation, let us also stand in solidarity with the many LGBT people who live in dozens of countries worldwide that punish, imprison, or even execute individuals on the basis of their sexual orientation. My Administration has launched a global campaign to decriminalize homosexuality and invite all nations to join us in this effort!

This is the same administration that imprisons immigrants on the basis of their sexual orientation and is introducing legislation that would make it legal for healthcare providers and emergency services to let LGBT+ people die. Like very many LGBT+ people, I felt like sharing my disgust.

Trump’s tweet is an example of the utter hypocrisy that happens during Pride Month, which is when most of the US Pride parades take place. Brands plaster the rainbow over everything: look at us! We’re down with the LGBT!

In fairness, some brands appear to mean it. Brands such as Nike and Levis have been LGBT-friendly since long before Pride Month became part of the marketing calendar. IKEA has long been among the most progressive and inclusive employers. Â Others, such as Wagamama, use it to announce decent things such as the introduction of gender-neutral toilets.

It’s great to see public support for LGBT+ people: it wasn’t that long ago homosexuality was “the love that dare not speak its name,” after all. Collectively, the support during Pride Month is good to see and a very visible reminder to the bigots that they’re on the wrong side of history.

But that doesn’t mean there isn’t some pride-washing going on, companies slapping on a bit of rainbow paint in acts of corporate hypocrisy.

Tech companies are a good example of that. Facebook likes a bit of Pride, and by all accounts it’s pretty good to its LGBT employees. But it’s also where some of the most vicious anti-LGBT+ abuse takes place, the home of rabidly anti-LGBT+ individuals and groups. Its love of low taxation also means it has a history of donating to some of the most anti-LGBT+ politicians in America, effectively helping to fund hatred. And as for Twitter…

Other brands are bad too. Paddy Power will once again do its thing for Pride this year, but those of us with longer memories haven’t forgotten its 2012 advert that encouraged viewers to laugh at trans women. Some of the biggest brands with rainbows on their products sponsored the Winter Olympics in Sochi a few years ago, turning a blind eye to the introduction of an anti-gay “propaganda” law.Â If you use the Wi-Fi in McDonalds, you’ll see its family filter comes from that haven for transphobic bigots, Mumsnet.Â My Facebook timeline is currently full of Pride-branded merchandise that doesn’t donate a penny to any LGBT+ organisations, often using designs ripped off from LGBT+ artists.

Here’s a fascinating fact. Last year, the pharmaceutical company Gilead sponsored New York Pride and donated to LGBT+ charities. Gilead makes Truvada, a pill that can almost eliminate the risk of contracting HIV. Gilead can clearly afford to throw a few coins at the gays: if you don’t have insurance, Truvada is $2,110.99 per month.

It’s not wicked if we wrap it in a rainbow

It’s interesting to look at Pride-related advertising through a critical lens: if the adverts include any LGBT+ people at all, and very many of them don’t, who do you see? How are they portrayed? The glossy ads I see are very white and stick to a very narrow range of portrayals. Good luck spotting a non-passing trans woman, a bull dyke or a gay guy who doesn’t look like Michelangelo’s David.

They are also incredibly, often hilariously, safe. “Love is love”, the copy says, but the corporate approval doesn’t seem to extend to actually showing that love. Much safer to show a rainbow-striped hamburger with two chaste models than two LGBT+ people hugging, let alone kissing.

That narrowness is symptomatic of a wider issue. When you support Pride, what are you celebrating? Who are you supporting?

I’ve mentioned before that sometimes “I supported gay marriage” is the new “some of my friends are black”, a fig leaf that hides intolerance of or even bigotry towards anybody who isn’t “one of the good ones” such as loudly feminine men, genderqueer and non-binary people, trans women and men and anyone with (to the straights) awkward or unpalatable opinions. Some of the marketing around Pride Month feels the same.

Pride started with a riot

Marketing isn’t brilliant at history, so it’s worth remembering what Pride Month actually is. It’s a commemoration of the Stonewall Riots of June 1969, when a bunch of LGBT+ people got pissed off with the police. At the time, it was illegal for women to wear fewer than three pieces of feminine clothing or for men to dress as women. The police would regularly raid places such as the Stonewall Inn and force the patrons to “verify their sex”, arresting anyone who didn’t stick to gender norms and sexually assaulting some of them.

Wikipedia describes what happened on 28 June 1969:

Those dressed as women that night refused to go with the officers. Men in line began to refuse to produce their identification. The police decided to take everyone present to the police station, after separating those cross-dressing in a room in the back of the bar.

…A scuffle broke out when a woman in handcuffs was escorted from the door of the bar to the waiting police wagon several times. She escaped repeatedly and fought with four of the police, swearing and shouting, for about ten minutes. Described as “a typical New York butch” and “a dykeâ€“stone butch”, she had been hit on the head by an officer with a baton for, as one witness claimed, complaining that her handcuffs were too tight. Bystanders recalled that the woman, whose identity remains unknown (StormÃ© DeLarverie has been identified by some, including herself, as the woman, but accounts vary), sparked the crowd to fight when she looked at bystanders and shouted, “Why don’t you guys do something?” After an officer picked her up and heaved her into the back of the wagon, the crowd became a mob and went “berserk”: “It was at that moment that the scene became explosive.”

That’s what the rainbows are commemorating: a bunch of LGBT+ people losing their shit.

Put that on your billboard.