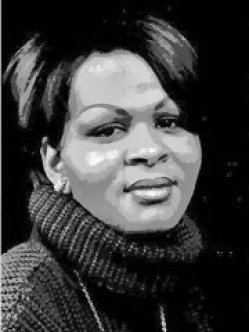 Hunter, who was 25, was injured in a car crash. When first responders arrived on the scene, they cut off her clothes and discovered that she was transgender. Instead of treating her they verbally abused herÂ and mocked her, and at DC General Hospital she received shockingly inadequate care. She died of internal bleeding in the ER.

The District of Columbia was subsequently and successfully sued, with damages of $2.8 million awarded to Tyraâ€™s mother. Dana Priesing, who observed the trial, wrote that the evidence clearly showed that â€œER staff, as evidenced by their actions, did not consider her life worth saving.â€

Tyra was knocked out by the crash, but by the time the firemen arrived, she was conscious but dazed, and developing airway trouble from teeth knocked into her mouth. Tyra looked female at first glance, but in their initial injury assessment, a fireman discovered Ty’s male genitals, uttered the epithets (“This ain’t no bitch. It’s a nigger. He’s got a dick and balls.”), and ceased treating her.

They failed to clear her airway for some period of time while they laughed at her as the crowd yelled at them to get to work. Other emergency personnel on scene approached some time later, after treating the other injured passenger. They found Tyra still lying on the grass, gagging and combative, apparently trying to escape the taunting firemen.

…she suffocated from lack of oxygen in her blood. Dr. Baker testified that the sensation would have been “sheer terror.”

None of the first responders or the medical staff involved in her death were ever disciplined.

Imagine reading that and being on the side of the bigots.

That’s where the Trump administration is.

The US Department of Health and Human Services has announced a long-expected rule that would enable healthcare workers to deny people treatment based on “moral or religious objections”.

According to actingÂ Department of Health and Human Services secretary Eric Hargan a few months ago, this is necessary because “For too long too many of these health care practitioners have been bullied and discriminated against because of their religious beliefs and moral conviction.”

The rule would allow workers to refuse to provide basic health care like birth control, refuse to treat women who have had abortions, and discriminate against gay or lesbian individuals and their families, including their children.

It’s important to note that the healthcare being talked about here is not limited to healthcare that the religious people object to such as hormones for transgender people. It’s any healthcare for people they have a problem with. Fixing broken arms. Chemotherapy for cancer. Pediatric care for your children. Life-saving help after a car accident.

What this rule says is chilling: if you’re gay or lesbian, trans or a sexually active woman, the Trump administration considers you less than human. Bigots’ hatred is more important than your right to life.