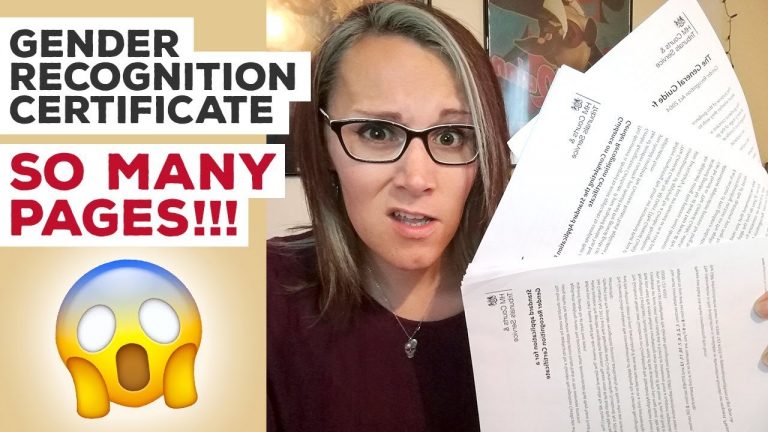 Let’s talk about gender recognition. I mean, it’s not as if it’s a controversial subject.

[Carrie looks sideways at the camera while comedy music plays]

What happens to the Gender Recognition Act 2004?

The GRA enables us to change our official paperwork – our birth certificates, our HMRC records and so on – so that it reflects our actual gender, not the one we were assigned at birth, and it makes our assigned gender “protected information”. If you disclose protected information in an official capacity – i.e. if you “out” us – you may be breaking the law.

Why would we need such a thing?

The GRA came about after two trans women, Christine Goodwin and another unnamed litigant, won a landmark legal case against the UK government. Goodwin argued that the government’s refusal to recognise her correct gender violated her right to a private life and her right to marry.

Goodwin had been living in her correct gender since 1985, and had gender confirmation surgery in 1990. However, more than a decade later the UK government insisted that she was a man.

The Department of Social Security refused to give her a new NI number or change the marker on her file from male to female; she was ineligible for the state pension (which at the time started at 60 for women); she felt unable to claim things she was entitled to, such as the Winter Fuel Allowance, because doing so would require her to produce her birth certificate – which still said male. The world was even harsher for trans people in 2002 than it is now, and effectively outing yourself wasn’t something you’d want to do unless you absolutely had to.

Goodwin also argued that by refusing to recognise her gender, the government was depriving her of her right to marry. Despite being a straight trans woman the law considered her to be a gay man, and as such she could not therefore marry a man (the Marriage (Same Sex Couples) Act 2013 was still more than a decade in the future).

The court was unanimous. To use a legal term, the UK government were being dicks: there was no good reason to refuse to change Goodwin’s legal status or to let her marry.

In support of your application you need to provide various bits of evidence. One of the most important, compulsory ones is a report “made by a registered medical practitioner or registered psychologist practising in the field of gender dysphoria and must include the details of your diagnosis of gender dysphoria.”

No diagnosis, no report, no GRC.

So we now have a system where the UK law is out of date: gender dysphoria is an outdated term for a variation no longer classified as a disorder by the World Health Organisation.

This is one of the reasons why the GRA needs reform; it’s not the only reason (for example it doesn’t recognise non-binary people), but we’ve known for a long time that the various health organisations were depathologising being trans and that the law would need to change accordingly.

And this is where some people get angry, because we use the phrase “self-identification”. That has been widely and often wilfully misinterpreted.

The existing GRA system already works on the basis of self-ID. It has to. There’s no blood test that tells you you’re trans, no DNA analysis, nothing you can hold up to a lightbox and stroke your chin to. The diagnosis is based entirely on interviews with the person who has come to the conclusion, usually after a great deal of pain and soul-searching, that they’re transgender.

That’s why so many other places (Ireland, California, Malta, Norway, Argentina, Portugal, Belgium, Denmark, Pakistan, Chile) have dropped the requirement for medical evidence in legal gender recognition: it’s just an unnecessary (and expensive) bit of bureaucracy. After all, we don’t ask gay people to prove they’re really gay before they can marry. Why medicalise trans people when they’re just as capable of knowing their own minds?

I’ve still to see a coherent, factual explanation of why such a change would be detrimental to women. The self-declaration process hasn’t been abused in the various other countries where it’s law. A GRC doesn’t change who can access what (in the UK, that’s the Equality Act’s department; that isn’t under review). And I can’t think of a single reason why a predatory man, or anyone, would complete a bad faith registration. All it does is sort out your government paperwork,  enable you to marry whoever and however you wish and give you a birth certificate that doesn’t out you. A GRC is of no benefit whatsoever to a predator.

Under the current system, I’ll be eligible for a gender recognition certificate later this year. If reform plans aren’t announced then I’ll probably apply for one, because it means I’ll finally have all my government records in sync: my HMRC and DWP records will finally match my NHS ones, my passport and my driving licence and the Electoral Roll.

It’ll make my life very slightly simpler, and it won’t affect yours at all.