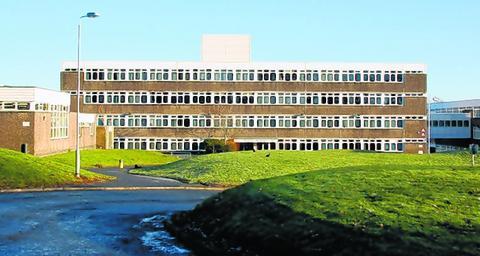 This is Garnock Academy, the secondary school (high school for my American friends) I attended in the 1980s. It’s near a town called Beith.

I wasn’t happy there. I doubt I’d have been happy anywhere. It was an era of vicious homophobia, and the homophobia printed in the newspapers echoed in the playgrounds. “Gay” wasn’t just a taunt but a trailer: it was the shout that announced the bullies’ arrival. I heard it a lot.

I’ve linked elsewhere to people’s stories of growing up LGBT, and while the details differ there’s a common theme: we grew up believing there was something wrong with us, with a deep sense of shame and guilt about being ourselves. Instead of learning to thrive, we learned to hide, both metaphorically and literally. We policed our own behaviour and tried our best to avoid the bullies.

Garnock Academy is long gone â€“ bulldozed a few years ago with a brand new school, Garnock Campus, opening up on the other side of town â€“ but its effects linger.

Yesterday, on a whim, I popped into one of my favourite places: Category Is Books in Glasgow’s South side. It’s Scotland’s only LGBT bookshop (one of only two in the whole UK) and has quickly become a hub for the LGBT community; I’ve been there for book and fanzine launches as well as adding to my collection of enamel pin badges.

It’s the kind of place where you bump into people you know, and yesterday was no exception: I was delighted to see a few friends there, so what was supposed to be a five-minute visit turned into an hour of chatting with my friends and other customers. One of them was a young woman who really reminded me of my daughter: fiery, funny and fast-talking with that tweenage thing where your brain is moving too fast and your mouth is struggling to keep up with all the things you have to say. Like my daughter she’s confident in a way I never was, a firework in human form.

One of the things she talked about was her school. She laughed as she talked about being known as “the gay kid” in her class, something she’s clearly proud of.Â The school has an LGBT Club, where she’s made friends with other gay kids (and straight kids who just come along for the chat), and LGBT Champions, of which she’s one. She’s clearly thriving there, happy in her own skin.

“Your school sounds amazing!” I said. “What one is it you go to?”

“Garnock Campus,” she said. “It’s near a town called Beith.”