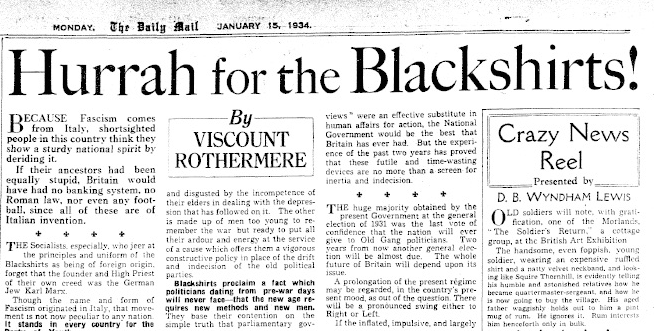 MP David Lammy is being lambasted by the right-wing press for comparing the Brexit-pushing European Research Group to Nazis and suggesting that the Brexit debate has helped spread far-right hatred. You can probably write the articles yourself: leftie commie, traitor to Britain, etc.

Except he’s right. And he’s not the only politician saying so. Here’s that infamous commie, former Tory PM Michael Heseltine:

But you canâ€™t escape this chilling thought: the extremes of the â€™30s were born of economic stress, and the thing that is driving the extremism today is the fact that since 2008 we have had frozen living standards and people are looking for alibis.

And if you put together the bureaucrats of Brussels, the immigrants and the foreigners and the elite … all that sort of stuff … it has a sort of basic, chilling appeal for people who are desperately looking for an alternative.

Those who do not think the rising threats of political violence, strident nationalism, attempts to bypass parliamentary institutions and increasing nastiness towards minorities do *not* indicate the beginning of a turn towards fascism must ask themselves…

The way fascism manifested itself in the 1920s and 1930s was not the only way it can manifest itself.

Fascism does not only exist in black and white photos and Pathe news reels.

Think, for example, of the independent institutions which extreme “will of the people” Brexiters have sought to trash:

Even demanding letters to universities.

This cannot be healthy.

…And look at the routine casual insults and nastiness regarding Jewish people, Muslims, trans people.

And recall the first books to be burned: https://en.wikipedia.org/wiki/Institut_f%C3%BCr_Sexualwissenschaft#Nazi_era

Lots of “others” to be de-humanised, despised, mocked.

We all know where 1930s fascism ended, but it seems that many of us have forgotten or choose to forget how it began.