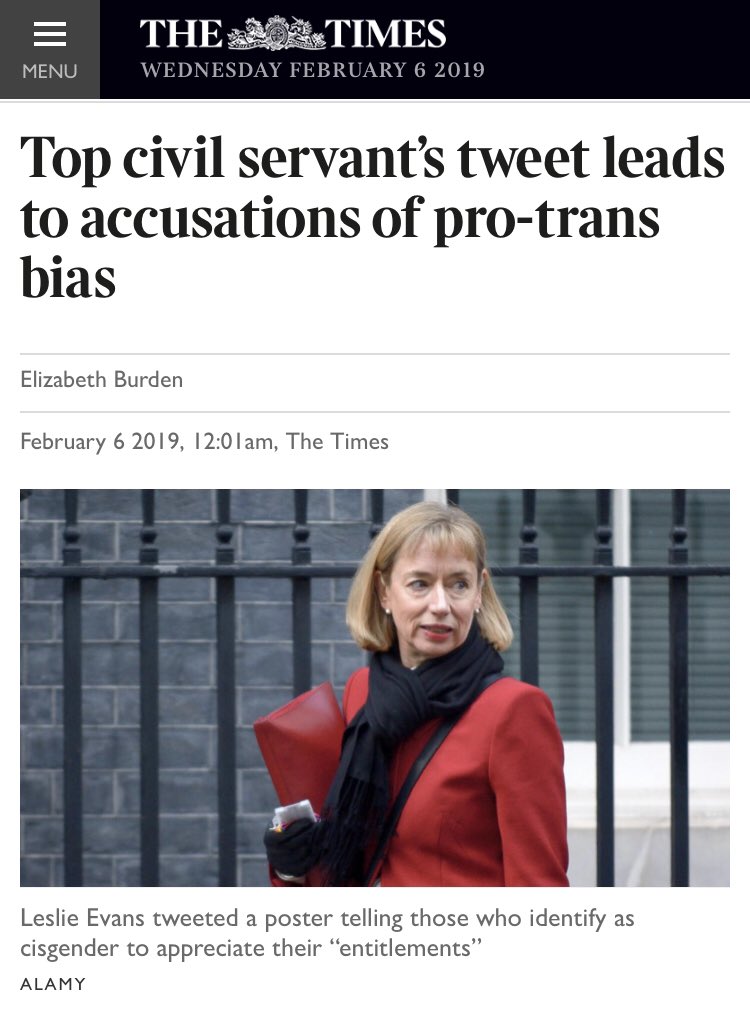 This is the latest story in the Times and Sunday Times’ ongoing campaign against trans people. Even by those low standards, it’s a pathetic attempt at turning something innocuous into a hit piece.

The tweet in question was posted in November. Here it is:

It’s a thoroughly unremarkable bit of political social media, and the supposedly inflammatory poster – the fourth image in the tweet – is a pretty innocuous “don’t be a dick” poster suggesting that it’s possible to be pleasant and respectful to trans people. It’s worth pointing out, because the Times never does, that the major women’s groups in Scotland – Rape Crisis Scotland, Scottish Women’s Aid, Zero Tolerance, Close The Gap, Engender and Equate Scotland among others – are proudly trans-inclusive.

Lets unpick that, shall we?

“Pro-trans bias”. Bias is a negative word; it means to be inclined or prejudiced for or against a particular group, usually in an unfair way.

To put it in this context is to say that to be pro-trans (or as I’d put it, pro-not being a dick to trans people) is a bad thing. The entire article is based on the flimsy premise that to post something mildly supportive of trans people is somehow shameful and something a politician shouldn’t be doing. It implies that by suggesting we should perhaps not be bastards to trans people, the politician is biased against non-trans people.

The headline’s doing a lot of work, isn’t it?

As I say, bias is prejudice for or against a particular group. It’s something you’d be guilty of if, say, you accused a politician of “pro-trans bias” over an innocuous, two-month-old tweet but failed to report (let alone criticise) the UK government officials who repeatedly meet with rabidly anti-trans groups (Transgender Trend and Fair Play For Women twice and A Woman’s Place three times, with FPFW invited to a further two “round tables” to discuss limiting trans people’s rights) or the MPs who post anti-trans sentiment to social media.

It’s the kind of thing you’d be guilty of if your columnists were activist supporters of anti-trans groups but failed to declare that in their regular anti-trans columns.

It’s something you’d be guilty of if you repeatedly ignored the medical consensus on trans people in favour of scaremongering from activist groups.

It’s something you’d be guilty of… you get the idea.

Anti-trans bias in the press is so commonplace that to simply detail it would be a full time job, but the Times/Sunday Times has become so blatant it’s almost a parody of itself. If you buy these titles you’re helping to fund this bullshit.