“We” didn’t miss anything

This week, The New York Times made a podcast called “The Rise of Right-Wing Extremism, and How We Missed It”. Esquire’s Charles P Pierce is not amused: who, exactly, does the NYT mean by “we”?

To take the simplest argument first, “we,” of course, did no such thing, unless “we” is a very limitedâ€”and very whiteâ€”plural pronoun. The violence on the right certainly made itself obvious in Oklahoma City, and at the Atlanta Olympics, and at various gay bars and women’s health clinics, and in Barrett Slepian’s kitchen, and in the hills of North Carolina, where Eric Rudolph stayed on the lam for five years and in which he had stashed 250 pounds of explosives for future escapades.

Pierce â€“ rightly, I think â€“ argues that the problem isn’t that these things aren’t noticed, or flagged up. It’s that the people who warn about them are ignored by a largely urban, white, straight media class.

One of the best examples of that is the rise of the hard right in online spaces, where women and minorities have been yelling about the problems for many years now. Because the abuse didn’t affect people who weren’t women or minorities, media didn’t give a shit. This has been going on for a long time, and its reach is enormous.

These â€œtrollsâ€ are the anonymous, despicable beating heart of America. They are holding up a mirror to our society. They are insuring that the worst of us have a voice to incite real change. They elected an amoral, racist golden toilet for a president. And that same sickness has bled into something once as harmless as a childrenâ€™s space movie.

Something that’d be funny if it weren’t so serious is the way anti-trans people so frequently follow the same script: starting off by being hateful towards us before â€“ surprise! â€“ being hateful to other groups too.Â So the anti-trans legislators in the US start with us and then target cisgender women and trans men’s reproductive freedom. Anti-trans cultural commentators turn out to be misogynist. Anti-trans voices variously include domestic abusers, racists and anti-Semites.

It’s become a bleak running joke in some trans circles when yet another vicious bigot turns out to be viciously bigoted against more than one minority. That’s the thing about bigotries. They tend to travel together. 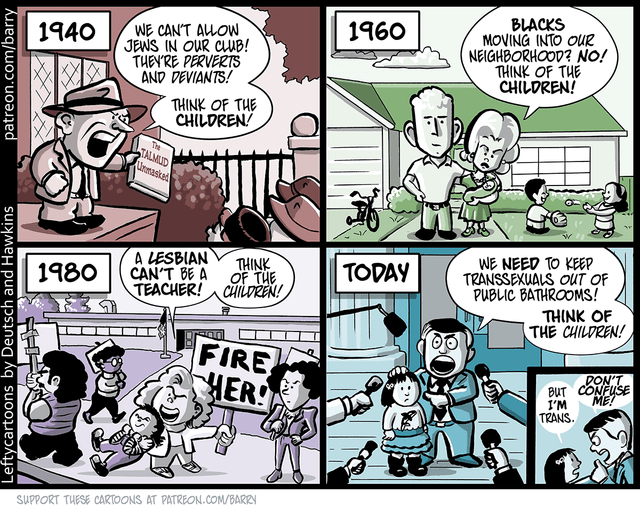 I wrote about neo-Nazi ideology yesterday, and that’s a good example of the kind of thing that gets completely ignored until it explodes into real-world violence. It’s of particular interest to me because neo-nazis online are very specifically and openly attempting to groom “gender critical” â€“ ie anti-trans â€“ women because they believe these women are very close to being “red pilled” and becoming “tradwives”.

Red pilling, if you’re not down with idiots, is an idea from the film The Matrix: if you take the red pill you will see the world as it really is. The fact that The Matrix was directed by two trans women, the red pill is based on estrogen tablets and the whole sodding film is quite probably a trans allegory escapes these dolts, because neo-Nazis aren’t very clever.

And “tradwife”? A tradwife is a woman who rejects feminism and embodies “wifely” qualities of submission, chastity and domestic servitude.

The idea that any self-respecting feminist would be in cahoots with these woman-hating tools is mind-boggling, and yet here we are.

Again and again the most vocal anti-trans voices echo the tropes of the religious right and the alt-right, shaming women for supposedly inappropriate behaviour. reinforcing the biological essentialism that feminism fought so hard against and supporting serial abusers of women because their enemy’s enemy is their friend. To see feminist groups in open alliance with evangelical, anti-women groups is quite something to behold.

This isn’t just happening in anti-trans circles. Neo-nazis have deliberately targeted anywhere they think they can find vulnerable, angry people: not just forums of angry women but for young, angry men who can’t get laid, forums for people with mental health issues, forums where people are lost and desperately need somebody coming along to take them under their wing.

The problem with hate is not that nobody’s talking about it. It’s that by and large, the media isn’t listening to the people who are desperately trying to sound the alarm: women, ethnic minorities, LGBTI people, disabled people. And when rhetoric becomes reality, when online radicalisation makes a Christian shoot up a synagogue or a straight guy shoot up a gay bar or an “incel” drive a truck into a crowd of shoppers, they wail “how did this happen? How did we miss this?”

You missed it because you weren’t listening.